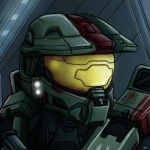 ummm, there doesn't appear to be anything wrong with his pages, also, a question, what Class of Spartans is Gamma 2 from?

yes you are allowed to use whatever charaters you want

Just put it in werever you want it's your decision

Nice reference. You do realize that this makes Battlegroup Bird nearby the rest of the UNSC, Covenant and Sentinel forces and only about a hundred miles away from being directly above the battleground on the planet's surface. Thanks though, cause I'm about to see what the Hornets and Dragon Squadron can do. -- Lordofmonsterisland "Roar to me" 23:42, 30 August 2007 (UTC)

Um sure, i guess I can join, -- The State(Our Decrees and Law!)( The State Alchemists we've enlisted (a reason not to mess with us))

Actually, none of them are from Unyielding. They are from the heretic and MajorDumps film festival thingie.

Question about Orin to Ashes

Hey do you think my guy Frank Arker could be like....4th in command of the UNSC on Orin? -- The State(Our Decrees and Law!)( The State Alchemists we've enlisted (a reason not to mess with us))

==would you like to Help==im wondering if you would like to help with battle of Instalation 05 if you do contact me on my talk pageMatf 21:55, 4 September 2007 (UTC)

Yeah....OtA doesn't seem to be having much luck....-- The State(Our Decrees and Law)(The State Alchemists we've enlisted)

Ah...sure I'll join but school started and I don't know if I'll actually be able to write anything but I'll try the best I can...btw if you need an elite character in the story I have one here and the story on my page=(--ChurchReborn 03:50, 14 September 2007 (UTC)

Ill join. I have a question though, does everyone involved have to die?

Got some questions and...

I'm new here and I think it'd be fun to edit this wiki, but I'm confused about what is allowed and what isn't and a few other things.

If you aren't the person who can answer these questions, please tell me who to ask then. Thanks. Chiafriend12my works

ok I join but i will do much this week end that today, im at school.User:Chief frank 001

May I please recieve an Invitation to Halo: Orin to Ashes?

Psst! I have a question about OtA, whose in charge of all the Marines on the surface, I noticed your in charge of the Fleet and the Helljumpers, but whose the boss of the Marines?

I suppose maybe my Colonel Arker could be the head of Marines, then your in charge of the ODST's and Fleet :) -- The State(Our Decrees and Law)(The State Alchemists we've enlisted)

Hi SPARTAN 089, I've seen you are a very talented artist and your work is truly amazing! I am UNSC Trooper from the UNSC Chronicles group, and we are looking for artists to help make a comic book presentation of our Chronicles. I hereby invite you to help us make this comic book. Your talent will surely be appreciated in our group.

Please let me know if you are interested in helping us create this comic book. I look forward to working with you.

Dear SPARTAN-089, I, Captain Spartan G-23 of the CAF am promoting you to Corporal. Here is your userbox:

This is a tad late but I was wondering if I could join Orin to Ashes?

I'd just like to remind you that we have a policy in which two users cannot have separate articles about the same thing. Basically, if someone else has a SPARTAN-089 article, you have to either compromise with that user or move yours to a different designation (three digit number at the end of a SPARTAN tag).

The thing is, the G before a Spartan deignation refers to a Gamma Company SPARTAN-III. If you pick a new number, one that isn't already taken, I can make the necessary fixes to the article.

I would prefer if you picked a new designator...mainly because those who bypass the system by putting a name next to their article are on my list of articles to target for disregaurding policy later on.

While I understand where you are coming from, but I still have to uphold policy. You can change the designations (just tell me what they would be and I'll fix them) or you can try to compromise with the people who currently hold the designations you want (I've contact Dubtiger concerning 089 for you). You msut understand, its just the way the site works.

If that is what you so choose, then go for it. However, I don't know if a simple thing like designations should be so important. Besides, your articles won't be deleted if they show that any sentient thought was put into them, even if they do breach policy in some minor way.

117649 AR and myself are attempting to ressurect our old RP Hollow Bastion and you are invited to join.

You have been cordially invited to participate in Halo: Battle for the Ark, an RP where any force can enter the fight! more details can be found on the page itself -- The State(Our Decrees and Law)(The State Alchemists we've enlisted)

What is wrong with my fanon? BTW Im a french canadian that why my english suck User:Chief frank 001

Your article Gary, is being bugged by admins, they're saying that he still has the attributes of a SPARTAN-III.

this is probably a lil late but could i get in on this? Hollywood

That could work. Oh, and you may be happy to hear that we are going to be getting rid of the rule that won't allow people to have Spartans with the same designator.

I've made a slightly mislabel but from what you've been writing on your Spartans, your just suggesting they are another class of Spartan-IIs, and Spartans-1.1 (which i accidentally thought were 1.5) and children of Spartan-Is. Anyway, basically, your jsut inventing a whole entire spartan program from no where. And onto the CQB and EVA part, it still doesn't make sense, why be forced to choose wether they want space or close quaters armor when Spartan-II had both their Mark IV and EVA. --Ajax 013 23:52, 10 November 2007 (UTC)

could you please try and watch the swearing things like Sh@! and He!! and other stuff like that is ok but watch the really bad swearing like the f word.

You gottcha, although I have had some problems with my messenger. We will all meet at the same lobby/game and discuss the set and plot somepoint this week.--The Evil O’Malley 20:35, 16 March 2008 (UTC)

I'm 100% with u findin O'Malley, if u want I can contact him through XBL, but may i suggest instead of instantly fleeing this site, we attempt to get O'Malleys ban removed 1st?.......thnxJust Another GruntConverse 21:45, 26 April 2008 (UTC)

Hmm...after reading the above comment i think we should focus more on bringing O'Malley back into this site, if we can reinstate him as a member, then mayb he can help prolong this sites lifepan, before we're flooded with godmod-factions with no flood or enemy-covies to hold onto. Just Another GruntConverse 22:05, 26 April 2008 (UTC)

To lose two members because one can't follow the rules. However, good look trying to found a halo fan fiction wikia with malley that 'treats its members well', thats the precise reason why Malley has been banned. <Death to Heroes>[The Damned] [The Lost][The Forgotten]|Deus Ex Ajax

When you make this new site, let me know where to find it please. I'd like to look at it at the least. --MCPO James DavisLOMI HQI here your criesMay your works be honorable
15:21, 28 April 2008 (UTC)

Sounds good, we can grab O'Malley back from his exile 2, hopefully get as many ppl from here to move as well, as well as pick up those l8r aftr this sites ruined :) if u need any help, im here Just Another GruntConverse

yes my fanon is necersary evan though it was short it was mine and thats what this site is meant for.

My Spartan dose nopt have a page

Battle for the Ark is being deleted

This is an announcement to all users involved in the RP Battle for the Ark: the page is being deleted, as all events were rather NCF/GM. I may make another story that can be used to recreate the necessary events for character storylines, though I don't guarantee this. If you have anything that happened in the RP that was necessary for one of your character's storylines, please tell me so that I can add it to a list to see if there's enough content to deem a new RP necessary. --MCPO James DavisLOMI HQI hear your criesMay your works be honorable
18:53, 27 June 2008 (UTC)

Yasmine is considered cannon though. And the section is canon too. But the only thing non-canon about nicole is her SPARTAN tag.

Well how can I change the title?

Fixed the date. Mixed up the last two #'s :) And in my stories he's part of a group of spartans developed alongside the SPARTAN-II's.

Technically, EliteMaster is allowed to have a SPARTAN-2.5 page as well. I'll simply disambig the pages.

Anyways, dude there would be no other way to get off of Reach other than on the Autumn because no other ships left, they got destroyed. Sorry for trying to make a beginning to his story.--

Hello, Andromeda Vadum here. I was wondering if I can get an art request done for two of my characters:

I'd actually advocate to wipe most of them out but I'd still like to save them at the same time in case I need information that I'd want to use. But really most if not all of them are obsolete save for things that share the same name of stuff I kept like the Battle for Orin. --SPARTAN-089 (talk) 23:50, December 2, 2015 (UTC)

Hay man this is the guy who contacted you over Xbox Live. Just dropping a msg so you know where to find me :)

Hi, The main thing I need help with is the general structure of it. I'm currently working on a Spartan program and just don't know how to structure. I've got a lot of info just don't know how to present it if you know what I mean. This is also my first go at creative writing so any tips would be awesome. --CMS Demon Cross (talk) 10:38, March 15, 2016 (UTC) CMS Demon Cross

Thanks for getting back to me mate, cheers for the tips I hope you have a scan through my articles as they pop up it would be awesome to hear some feedback :)--CMS Demon Cross (talk) 10:50, March 23, 2016 (UTC)

Retrieved from "https://halofanon.fandom.com/wiki/User_talk:SPARTAN-089?oldid=610157"
Community content is available under CC-BY-SA unless otherwise noted.