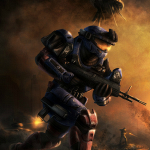 RE: The DELTA Initiative

Hey, if you're not busy - could you look over my Colt Blaster page? I'd like to get some constructive criticism and see if it looks like a decent article going forward. I put a lot of work into it thus far. http://halofanon.wikia.com/wiki/Colt_Blaster_HDW_Mk.15 Distant Tide (talk) 08:17, May 8, 2017 (UTC)

I did some searching and I realized that Halo 5 does not in fact have a plasma augmentation modifier for guns in Warzone, just Kinetic Bolts which I'm uncertain of using because Hard Light is still rare for both Human and Covenant to play around with. Just because its seen in multiplayer, its a simulation - not in actuality. I'm trying to find a suitable alternative to breaching energy shields using 5.56mm NATO at the moment. The reason I used plasma-tipped ammunition was because I figured plasma can coat a bullet - I guess not.

I'm looking now maybe at alternating to radioactive alloy rounds, a mix between the Covenant Carbine and UNSC weapons, or using an EMP-type bullet. A kind of round that would create an electromagnetic pulse to disrupt energy shields and plasma bodies because most Covenant technology involving energy or plasma requires electromagnetism to maintain the shape of their equipment, produce a counter-frequency would either have the bullet bounce harmlessly off the shields or they would bypass the shields altogether. I'm digging around at the bottom of the barrel right now for concepts, so, level with me - is there any other options? Distant Tide (talk) 16:28, May 8, 2017 (UTC)

Given some thought, I think I know how to make this work. So - one issue with Halo's human technology is that its archaic by the 26th century. Propellant projectiles won't work in all cases and are too impractical alone. Space would negate the use of smokeless powder in firearms because the lack of an atmosphere means a lack of oxygen to ignite the propellant in a bullet casing. I addressed this already in my article, instead of using standard bullets with casing - modern firearms are not limited to this design. The Mk.15 can use superposed ammunition, "Metal Storm" where bullets are stacked on top of one another and propelled using an electric fuse. In space this would require an internal atmosphere for a discharge but that is getting specific.

I meant for the Covenant species to tinker with Human weapons in the Joint Occupation Zone and vice versa, hence the meshing of human and Covenant technology. I like my EMP bullet idea because an electrical discharge could technically disrupt an energy shield but its an imperfect idea, I would need to talk to some of my Halo authors on FFN or check with someone on here to see whether its feasible. The radioactive rounds used for the Type 51/57 Carbine is easier to use however, all I need is to have an alloy of some kind - a mix of the material used in the Carbine, mixed with a regular bullet and then it can just be radioactive and the round would work fine. I'm just not sure how effective it would be against shields compared to a regular DMR or Carbine because its still using a .22 caliber round instead of a .308 caliber like the MA5 series.

I'm discouraging myself from using Brute technology because it appears they are just larger and less refined technology of humans - maybe including radioactive isotopes in their ammunition but to be honest, Brute technology beyond Gravity weapons and their physiology as an opponent - they are not very impressive - their weapons are made to terrorize more than to fight with refinement like Humans or Elites. Plus, they rely on massive shards - not small 5.56mm rounds. It doesn't correlate in the kinetics department.

I'll see what I can change. Technically, using an electromagnetic signal for a special bullet could allow a layer of plasma to float atop a bullet's surface - at least in theory. It would be highly complex, much like the EMP bullet idea so I'm willing to agree with you on your assessment but I'm going to describe it as "improbable" instead of impossible.Distant Tide (talk) 17:36, May 8, 2017 (UTC)

No problem man. It never hurts to ask for some feedback, whether educated or not. At least I looked for some opinions and I got the feedback I wanted, I made actual changes to my article based on your feedback anyhow so you did help me out. Thanks! Distant Tide (talk) 19:55, May 8, 2017 (UTC)

Sarah on your Class II Article

Hey man. I need some help.

I'm working on rewriting my Rainforest Wars story and I'm using articles like the Colt Blaster, my Fox Company Rangers, and a new article, the United Republic of North America.

I do not know why, but I assume someone already tried to write the article but deleted at some point. I have like 14 posts to my talk page and I have no idea what to do with them.

I'm not trying to be controversial, I just got an issue that there are comments from 7 years ago flooding my feedback page...how do I clean it up?

Edit: Apparently Grizzlei was the previous article owner. Go figure. Not that its a problem though, I just noticed.

Retrieved from "https://halofanon.fandom.com/wiki/User_talk:S-D379?oldid=695552"
Community content is available under CC-BY-SA unless otherwise noted.