Hey everyone! I'm excited to share with you all the preliminary data behind the HF Spartan Census!

For those unaware (didn't see in Discord) for the last few weeks in my down time I have been going through all characters in the "SPARTAN" category. Why? Well I thought it would be interesting to see what trends we find in our characters we work so hard on (well, some of us, as I'll explain). Currently, this data was collected from 314 different Spartans from letters A-J and I'm estimating I maybe a quarter of the way done as I am only including Spartans that are not in user pages and are devoid of any data. This isn't a perfect science, I believe as it stands I've made no major errors and maybe 5 small ones max in data collection (which will not impact anything at this dataset size). That said let's get into it.

I collected data on several different parameters which are as follows: Spartan Class, Gender, Birth Month, Hair Color, Eye Color, Rank, and Status. I originally also was collecting Birth Planet, but stopped shortly after 100 Spartans as I noticed a trend where we would have a large number of one-time-only planets and it wouldn't be visually pleasing. During this collection I have also tried to remember the tallest and shortest Spartans, but I'll let you know the winners of that down the road when this is done. I will also share the incomplete planet data set or maybe redo it with random samples of each letter.

Either way, I hope you find this interesting at the least! 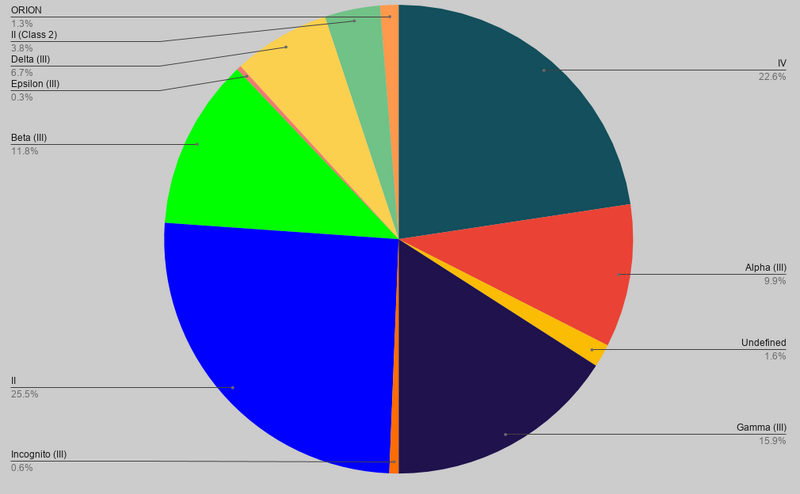 I'll write out this data as it's a little useful to Fanon stuff and Halo related than the others (which are more curiosities).

And, obviously of this data you'll noticed that a lot of these are SPARTAN-III companies, so let me rearrange these to not be as specific:

I will do a larger write up on this when I am complete, but I would also like to point out that 11.4% of these characters is from a Fanon expansion. I'd like to take a moment to raise a couple of these up! 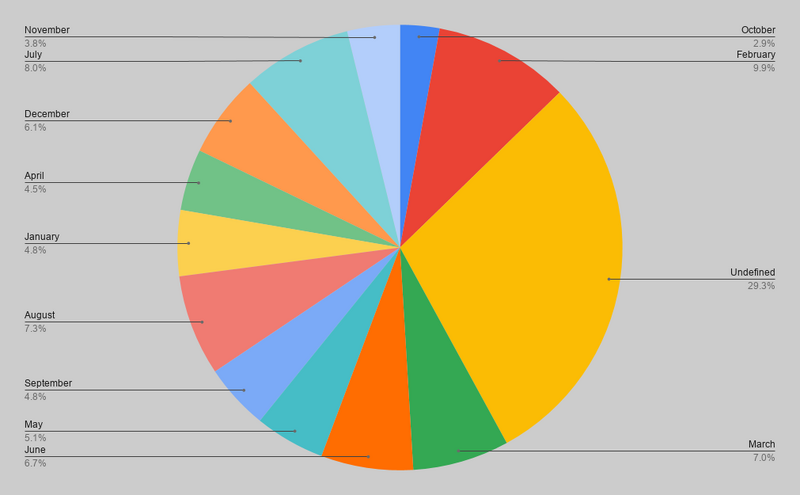 Again, I won't do a huge write up on this one, but I think the take away from this so far is that a lot of your characters don't have birthdays! I would note that maybe half of the whopping 29.3% Undefined had birth years, so in time I might take a crack at years. Not this time around, though. 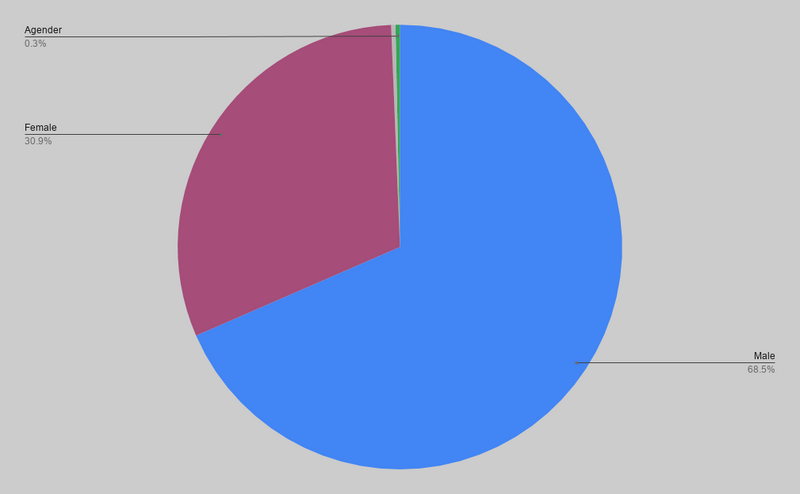 This is pretty straight forward, no pun intended, and illustrates our generally male dominated character pool. However, I would note that in the last four years half of the Spartans Of The Year were Female, opposed to the prior 8 wherein only one Female character was Spartan of the year. Still, this tends to make things line up well for what we might expect (70-30 for Census, 75-25 for SOTY). I think there might be also something to be said that I am under the impression that a lot of these earlier characters could be RP characters, but I am not an RP person or older member so ¯\_(ツ)_/¯

The small grey pie is "Undefined" 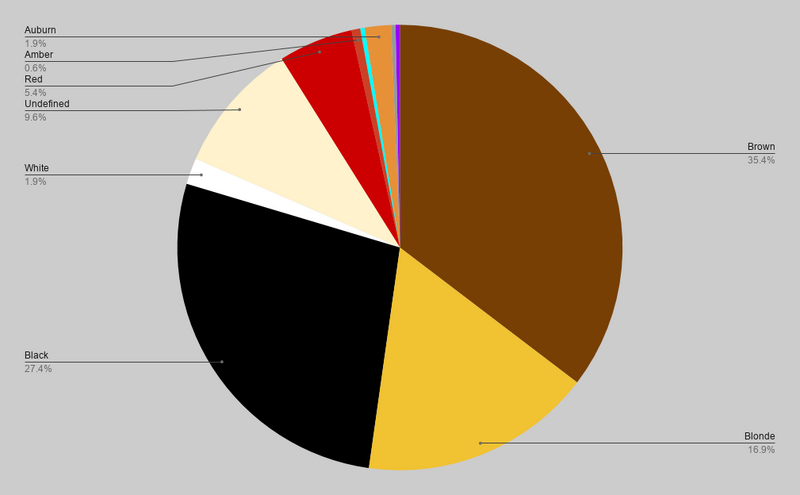 Again, straightforward. I will always take what is told is the characters hair color, so yes: some had Cyan and Purple hair (1 or, 0.3%). The other 1 you can't see is "Gray". 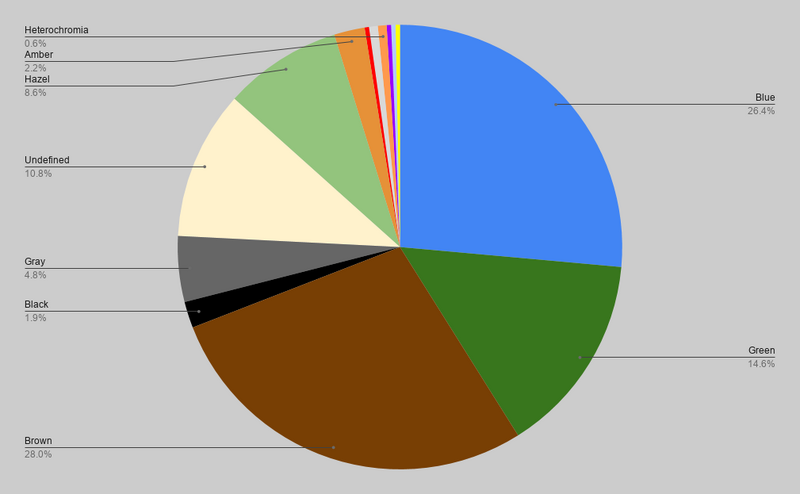 I actually found an error while looking at this: there is a "Grey" and "Gray" Eye Color pie piece, so that will be fixed in the final product.

Again, pretty standard stuff here. Our ouliars were "Red" "Purple" and "Yellow" with 1 Spartan Each. To be fair to the red-eyed guy, he had tattooed his eyes. 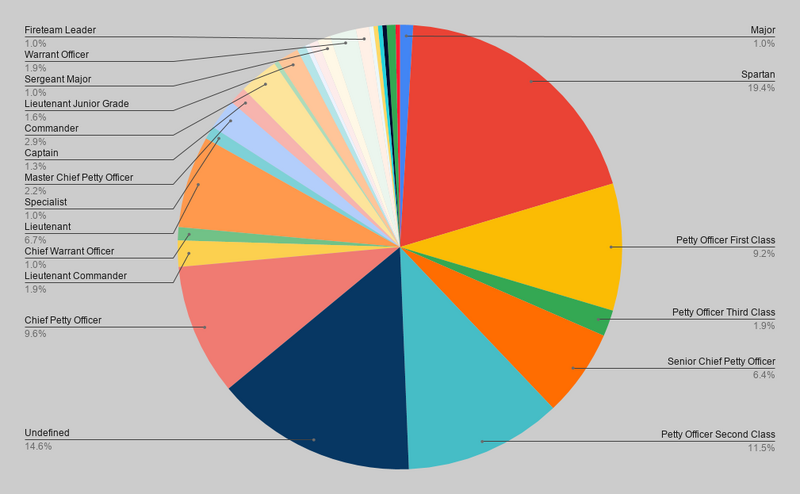 This one is a mess, but as we can see: Naval Petty Officer ranks are very prevalent and are only touched by "Spartan" and the lack of rank. We have one Rear Admiral in here, which is the highest rank and definitely a character of mine who is a washout 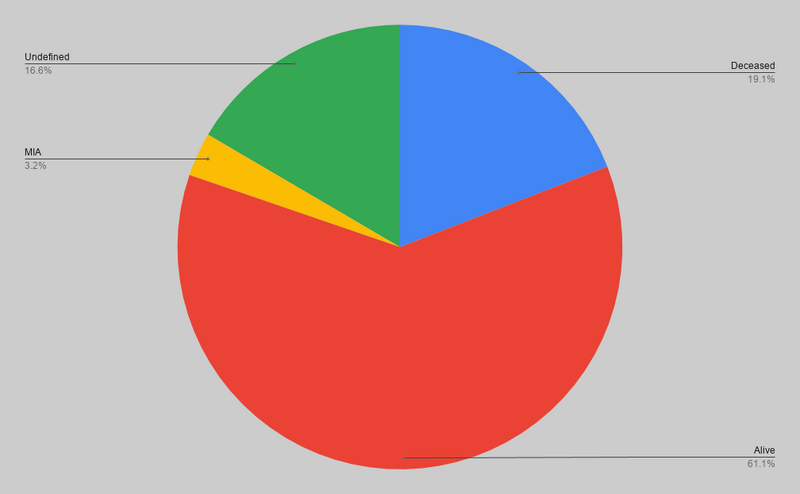 I keep saying it, so I'll say it again: Halo Lore: "Spartans never die, they're just missing in action" HF: "Well yes, but actually no."

Thanks for checking in on the status of this silly project! Feel free to ping me in discord if you have any questions! Please stay safe and healthy, everyone!