"Teamwork defeats skill. Always. It doesn't matter how good you are; if you and your team can't work together, you will always fail."
―SPARTAN-290 lecturing a SPARTAN-IV[src]

SPARTAN-290, born Jamal is a SPARTAN-II Commando of the UNSC Naval Special Warfare Command. Following his activation as a SPARTAN-II, Jamal would fight during some of the bloodiest battles of the Human-Covenant War, the Battle of Mars. In the 2600s, Jamal would be called up to train Bravo Company of the SPARTAN-IV Program, which would go on to fight in the Necros War. During this time, he was known to keep an Arcturus Wolf as a companion, and affectionately named him Dammit.

Born on the UNSC Colony World of New Jerusalem to a former Marine, Jamal was raised in a loving and caring atmosphere for most of his early life. Unknown to him or his mother, his father, a former ORION Project operator, had him injected with numerous drugs and had him undergo more than a few surgical procedures at birth, making him a Spartan 1.1. These drugs and surgeries enhanced his physical performance, as well as his intelligence, which made him stand out in primary school. At the age of four, his dad had already taught him basic hand-to-hand combat techniques, as well as how to disassemble and reassemble an M6C Magnum, as well as an MA5.

However, when he was six, a man came to his school searching for candidates with higher-than-average intelligence for a special institution on Earth. His mother was rather thrilled at the development when the man specificially asked for Jamal, and without consulting his father, signed the papers. Three days later, a special UNSC Military Intelligence Team came to his house, in the night, and kidnapped Jamal. However, he would not go without a fight - taking down two of the five men before they finally managed to knock him out. The next day, he woke up to a new sight - UNSC Military Base Reach.

After arriving on Reach, Jamal was rushed out onto a field with seventy other children, and ordered to stand at the base rest position at the halt - attention. Glancing left and right, Jamal noticed the other children crying... while he was strangely cold. He did miss his family, but he held his feelings inside, remembering what his dad taught him: save your feelings for when you can afford them. Standing near the middile of the formation, Jamal seemed to emit the essence of calm, while the other candidates cried and attempted to run. After the Drill Instructors (washouts from the ORION Project and standard UNSC Marines) got the group under control, they met their instructor, Gunnery Sergeant Nolan Byrne, who made them go through an obstacle course, where the candidates would split up into teams and ring a bell. On the first day, Jamal was placed with Gabriel-219 and Helen-330. On that first day, Jamal felt like he had something to prove, and left Gabriel and Helen behind, quickly scrambling up the obstacle course and ringing the bell. Immediately afterwards, however, Jamal was ordered to drop for disciplinary physical training (P.T.), where Byrne taught him one lesson he would remember for the rest of his life: "It doesn't matter how good you are, if your team fails, you fail".

That night, Jamal, angered at the fact that he did not get the chance to eat, went for a run around the compound, which was abruptly ended by running into a guard. After tripping the guard, Jamal began to run back to the disciplinary barracks, where he was jumped by more guards. Surrounded, Jamal couldn't find a way out, until Helen and Gabriel threw rocks at them, causing them to be distracted, giving Jamal an opportunity to run. They all made it back to the barracks in time for Byrne's inspection before lights out, and after that, Jamal apologized. They immediately became best friends, going on to win many more inter-candidate competitions before all of the teams began their actual training.

During training, Jamal's talents for scouting became apparent following an encounter with Orbital Drop Shock Troopers, where the intelligence he gathered on their routine movements turned the tide in a game of capture the flag, allowing Azure Team, as it was now called, to seize an opening in their patrol pattern. Due to this, Byrne began to develop an interest in Jamal, noting how he snuck up on numerous ODSTs without their knowledge, as well as capturing objectives before anyone knew he was in the building.

At the age of fourteen, Jamal and the rest of the SPARTAN-IIs underwent deadly augmentation procedures, the final test in their journey to become the best soldiers in the United Nations Space Command. Following the augmentations, Jamal graduated, but was heartbroken at the loss of his presumed girlfriend - Yasmine Zaman. However, after the funerals, Jamal immediately put the mourning behind him, and focused on the missions to come.

To indoctrinate the new SPARTANs, the UNSC Military Intelligence Division organized a simple mission for Azure Team - capture a Rebel Arms Dealer that had been supplying illegal arms to the United Rebel Front for years. The mission, codenamed VIGILANT WARRIOR, was a success, and the Arms Dealer was captured, giving the UNSC valuable information on where the shipments were heading. As a trophy, Jamal was allowed to keep a prototype M6C/SOCOM pistol, which he would use for years to come, only putting it away during the Necros War.

For the next three years, Jamal and his team would conduct random anti-Insurrectionist operations, who had been feared to use the UNSC's conflict with the Covenant to their advantage. Azure Team would undertake eight separate operations during the thre year period from 2546 to 2549, all of which were successes, adding to the myth of the SPARTANs,the seven foot-tall supersoldiers that had raised hell for the Insurrection and the Covenant alike.

During the closing stages of the Human-Covenant War, Azure Team would be tasked to assist UNSC forces on Mars; in particular, those from the Army. Although they fought valiantly, Jamal-290 would be the only member of Azure Team to survive Mars; the others were killed in separate incidents over the course of the five-month long siege. Their deaths would lead to his emphasis on teamwork with his SPARTAN-IV trainees; the members of Azure Team that were killed died whenever they went alone, or refused to work as a unit. Following the Human-Covenant War, Jamal would work for the UNSC Military Intelligence Division on several covert assignments, and much to his chagrin, alone. Much of these assignments would revolve around the UNSC seeking to grab whatever it could from the Labyrinth Array.

Following his lone-wolf missions, Jamal was sent by the Office of Naval Intelligence to help lead Bravo Company. 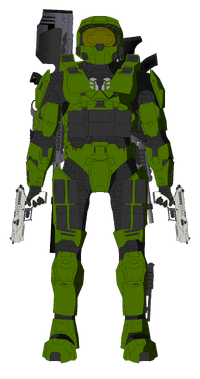 Jamal-290 was proficient in several disciplines of battle; but mainly close quarters, using stealth to get close to his enemies. During his time with Azure Team before they died, he used an M6C/SOCOM pistol as well as a standard BR55 Battle Rifle. However, as times and technologies changed, so did his armament. During the Necros War, he would use a BR09 Battle Rifle, equipped with a 4x sight, a grenade launcher, and a suppressor. In addition, he would use a M108A1 Close Assault Weapon System, or CAWS for short. A red-dot sight for increased accuracy was attached to the weapon. Also, he would use dual Angel Arm Cutlasses, each specially made for either his right or left hand. In addition to these firearms, Jamal would carry a M7B Tactical Knife strapped to his lower left leg for special close-quarters situations.

During the Necros War, Jamal would wear MJOLNIR Mk. VII armor, equipped with a number of specialized load-bearing gear as well as equipment made specifically to help in infiltration missions. In addition, his armor was fitted with a prototypical rocket launcher; it fired miniaturized explosive projectiles which were guided by target coordinates transferred from his helmet.

The Cutlasses
Add a photo to this gallery
Retrieved from "https://halofanon.fandom.com/wiki/User:Sgt.johnson/SPARTAN-290?oldid=617852"
Community content is available under CC-BY-SA unless otherwise noted.
FandomShop Newsletter Join Fan Lab