Omega squad was established in 2543, during the human-covenant war. The squad is made up of thirteen UNSCDF Orbital Drop Shock Troopers. All the troopers had intense training, more-so than an ordinary ODST. At first they used standard ODST armor, but over the course of many battles the customized them.

2607- Battle Of Kanna: Omega Squad were sent into Kanna with the reinforcements, and dropped from the ships in HEV's. Their targets were bridges across river deltas to allow armor reinforcements.

ODST from Nevada with a scan laser.

Two members of Fireteam Nevada waiting for a warthog. 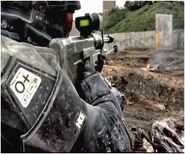 Two ODST's on their way to the 2nd battle of earth. 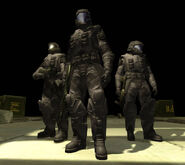 Three ODST's in a simulation Chamber.

Privte Rya Yato at the battle of the Ark.
Add a photo to this gallery
Retrieved from "https://halofanon.fandom.com/wiki/User:ONI_recon_111/Omega_Squad?oldid=583362"
Community content is available under CC-BY-SA unless otherwise noted.
FandomShop Fandom IG GalaxyQuest