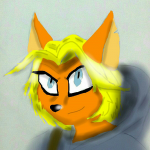 aka Cortana Hansen (FF.net and Discord)

Hi, <insert name here>, I'm Julia Finitevus! Welcome to my profile page. So, yeah, when I played Halo for the first time, I got addicted. Second game, same thing (haven't finished it yet, though). And I played Halo 5. I haven't played any of the other games yet, but I'm definitely planning to do so. Now, let's get started.

Note: The image in the infobox is a picture of one of my characters, provided by Brodie! :)

1. The Arbiter- he is a rather fascinating character. Despite being publicly humiliated after his retreat from the Halo Ring, he still served the Prophets. It's only when he's nearly killed after retrieving the Index (a.k.a. Sacred Icon) that he truly begins his journey.

2. Master Chief- another fascinating character. In the games I've played so far, I've never seen the face underneath that helmet. So it makes you sort imagine the expression he must have under there in such and such a situation. And there are times when the Master Chief says something that makes you want to laugh hysterically, like when he told Cortana not to get any ideas in Halo: Combat Evolved.  

3. Cortana- heroine turned villianess, Cortana is definitely an awesome character. Her traits, both in personality and that fact that she's an A. I. offer some interesting storytelling. The way she's portrayed makes you want to get inside her head, to understand what's going on in there. Especially when it seems she turns evil in Halo 5.

Halo Combat Evolved- This is my favourite because it's the game that started it all.

Favourite Fanfics on this Wiki

1. Halo 3: Ascension- it is such an amazing story. I'm left in total awe of it. It's phenomenal! And the art.. it's just totally awesome.

Favourite Fan Characters on this Wiki

Note: If you want to see information about my stuff, check out this page: Julia Finitevus/Sandbox I

Retrieved from "https://halofanon.fandom.com/wiki/User:Julia_Finitevus?oldid=656915"
Community content is available under CC-BY-SA unless otherwise noted.