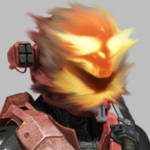 "I'll be honest, when some guy showed up for Status Quo trying to orbital drop in some boats, I had my concerns..."
― Spartan-D042 describing his first encounters with Distant Tide. (Annual Award Voting, 2017)

Distant Tide, commonly referred to as Tide, is an active member and Site Patroller of the Halo Fanon community who joined in May 2017. Following his first year of college, Distant Tide jumped on Halo Fanon after a two-year hiatus from writing Halo fanfiction. His first site article was the Colt Blaster HDW Mk.15, a twenty-sixth century interpretation of the American AR-15 rifle that drew moderate site attention and received several qualitative awards.

Before coming to Halo Fanon, Tide was a frequent writer on Fanfiction.net, starting 2010, and participated as a moderator on several related writing forums and roleplay servers. Much of his writing style was honed through Fanfiction.net, life experiences, and media consumption from a young age. Distant Tide pulls much of his writing style and ideas from his family's military background, historical and political nonfiction, popular literary fiction, anime, and other fanfiction.

On Halo Fanon, Distant Tide's main focus is on Merlin-D032 and Andra-D054 of SPARTAN-III Delta Company and their literary adventures. His on-and-off nickname Welcome Wagon refers to his frequency on Halo Fanon and hijinks involving other Halo communities and new Halo Fanon users. Outside his writing, Tide is also a frequent traveler and enjoys swimming, video games, and writing as hobbies. Distant Tide's current projects include a variety of short stories and novellas, including a few items outside the realm of Halo fanfiction.

(American military technothriller author. Attributed to an interview on Larry King Live. Quote derived from another by Lord Bryon: "Truth is always strange; stranger than fiction.")

Retrieved from "https://halofanon.fandom.com/wiki/User:Distant_Tide?oldid=719405"
Community content is available under CC-BY-SA unless otherwise noted.