"They will be what we have always dreamed of: An army of Spartans, well trained, well motivated and well equipped. They will carry out the purpose that their predecessors were originally designed for, that being the defence of Earth, and all her colonies."
―Lt. Colonel Richard Mack Junior, Speaking in 2569.

In 2569, a year after the costly Battle of New Hope , the UNSC needed a new generation of supersoldiers to combat rising Insurrection in the rebuilding colonies. The SPARTAN-IV Program was launched to make a cross between the hardy and long-lasting SPARTAN-II's, and the cheaply-made SPARTAN-III's. The Program was initialised in December 2569, and officially came to an end in the early 27th Century, with most operatives retiring around this time. Though the SPARTAN-V Program was implemented to replace it shortly before the Omega Incursion, this program became known as one of the most successful SPARTAN initiatives.

ONI initially called in six Spartans to begin training the three planned companies. All of the Spartans had fought in and survived the Human-Covenant War. This group consisted of three SPARTAN-II's and three SPARTAN-III's, acting as the CO and XO of their respective companies. A number of other veteran Spartans from Gamma Company were eventually brought in to act as commanding officers and trainers for Zulu Company. Unlike the other Spartan projects before it, The SPARTAN-IV project had several profound differences:

After the recruitment of over five hundred men and women for X-Ray Company, they were taken to the Special Warfare Center in Songam, Korea. There they would spend a year undergoing a very harsh training routine, involving paintball gun fights, VR simulators and training robots to name a few. Their chief trainer, Marco-025, taught them that survival was the most important thing on the battlefield.

One of the harshest tests came near the end of training when they were forced to spar against one another. The winners of each fight would progress until eventually three Spartans, Maynard-X112, Artyom-X043 and Max-X489, emerged as the victors. They were then forced to spar with their chief trainer and mentor, Marco-025, and his second in command, Alex-A121. At first, the Spartans were pushed back time and time again, but eventually, using teamwork, they were able to floor their trainers, completing their training. For this accomplishment, the three were each given the opportunity to form their own hand-picked teams.

However, as a final test devised by Marco-025 for the Spartans to earn their armour, they were to go through a trial by fire. The Spartans, given basic weapons and armour, were separated in an old forge works spanning several miles. They had five hours before the non-lethal sentry bots came online, and 24 hours to get out. All members of X Company, led by Max-X489, who later became the company commander, managed to make their way out after a gruelling mission. The Spartans were then presented their own individual, personalised MJOLNIR Armour. Due to the great cost at which the armour came at, the following companies were unable to receive it, instead getting advanced SPI armour, only receiving MJOLNIR later on. The training for Yankee and Zulu companies was much the same, although they had more years of training experience.

X-Ray Company finished training in January 2571, and were immediately deployed in combat, proving to be extremely effective against Insurrectionist forces in multiple engagements. Ten years later, Yankee Company, consisting of a thousand SPARTAN-IV's, finished training and participated in the Battle of Rell immediately after. Zulu Company finished training in 2582. With a total of 2500 Spartans active, the UNSC were able to win many major victories, though as ever, their numbers were too few to turn the tide of the war on their own. A particularly devastating battle came in 2599, with the Battle of Minerva and the end of the war. Most of the SPARTAN-IV's were killed during the engagement, leading to a merging of the survivors into a single company.

The remaining SPARTAN-IV soldiers remained active for some time in the 27th century, fighting in the Second Battle of Reach and the Omega Incursion before the program was officially deactivated in 2620. Most members retired, though a few remained in active service and were transferred to other branches.

List is accurate as of 2620 and the official dissolution of SPARTAN-IV.

Following the devastating Battle of Minerva in 2599 and the end of the First Galactic War, X-Ray Company no longer operated as a whole, as most of it's members were killed or put out of action during the battle. The survivors were placed into smaller teams that continued to operate for years after, largely integrating with Yankee and Zulu Companies.

Yankee Company started training at the same time as the other two companies. However, Yankee was to undergo the special operations training that X Company did not have time for. Y Company consisted mainly of teens, from the age of eleven to nineteen. Because of this, they were the most difficult company to train. The Company commander was Kane-099, a SPARTAN-II and former commander of Sigma Team and a veteran of the Human-Covenant War. Second in command was Martin-A136, one of the few survivors of the SPARTAN-III Alpha Company. most of the recruits disliked Kane, saying that he was too harsh on them. Martin then reminded them of what they would go through if they had X Company's Commander training them. The recruits of Y Company were all orphans, most of their parents lost late in the Human-Covenant War, or in the recent Insurrection.

The company were trained much in the same way as X Company was, with Lieutenant Commander Kane-099 as their chief instructor. The SPARTAN-II was well-versed in stealth, reconnaissance and marksmanship, and imparted his decades of experience to his trainees. Kane also taught them how to work very effectively as a team, and that as powerful as Spartans were, they were still not one-man-armies as the public believed. Yankee Company finished their training in 2578. Most of the members were between fifteen and twenty years of age. Unlike X-Ray, Yankee was kept secret for a number of years to avoid media coverage of the UNSC using orphaned child soldiers against The Legion.

Zulu Company was the third generation of SPARTAN-IV's, received thirteen years of training. These Spartans were trained by a number of older Spartans, including Jax-007, Louie-A199 and Julian-G209. Due to the large amount of focus on training up the first two companies, the applicants for Zulu were not taken until 2577. This company was just as large as Yankee Company, though it was much more controversial in nature. Most of the applicants were under the age of five when recruited, many coming from orphanages or plucked from wars on worlds such as Venezia or Mamore. Their longer training period would supposedly form them into better soldiers than the previous companies. In addition to their main tutors of a SPARTAN-II and Alpha SPARTAN-III, their trainers would include a number of semi-retired or reassigned Spartans from various units, including Julian-G209 and for a short period, Layla-B101.

Zulu Company were vigorously drilled in small unit and assault tactics, and became unflinchingly loyal to the chain of command. This trait led to some rivalry between Zulu and the two other companies, Yankee and X-Ray, who nicknamed them 'robots'. Zulu Company was finally deployed in combat in April 2583, after thirteen years of training and exercises. Most of it's members were in their late teens by this time, having known nothing but the Company from an early age. The Company was first deployed during the Siege of Eden V.

The augmentations for the three Companies were identical to the procedures the SPARTAN-III's went through, with a 99% success rate. Only one out of the 2500 SPARTAN-IV subjects ever suffered from complications during the procedure, yet was still able to function as part of a team. Due to the advances in medical science since the Human-Covenant War, their skills and reflexes were enhanced to much higher levels than their predecessors, though they were still 'inferior' to the SPARTAN-II's in some respects. The mind-altering drugs used in Gamma Company's augmentations were not present for the SPARTAN-IV's due to the possible dangers and eventual dependency on counter-agents.

The drugs used were: 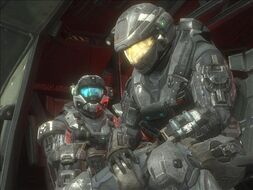 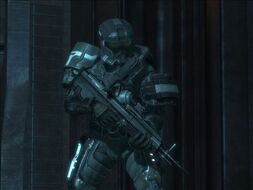 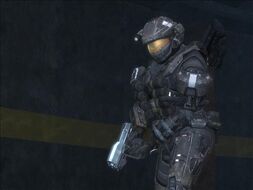 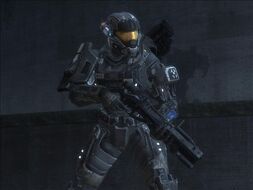 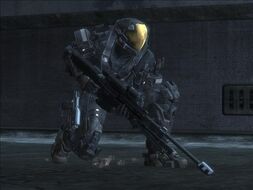 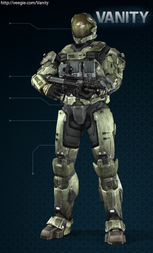 The armour used by many SPARTAN-IV's before proper MJOLNIR integration. 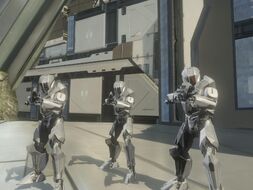 Lilac Team, the first SPARTAN-IV's to be deployed in MJOLNIR/Forerunner hybrid suits in 2584. 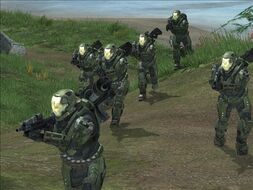 Members of Yankee Company in advanced SPI armour.
Add a photo to this gallery

Retrieved from "https://halofanon.fandom.com/wiki/User:Brodie-001/SPARTAN-IV_Program_(Brodie-001)?oldid=598764"
Community content is available under CC-BY-SA unless otherwise noted.