"Go ahead and call them fascist, mock their abilities, and vandalize that recruiting office, they'll just lock you up and save your arse again and again."
―Anonymous

The United Nations Space Command (UNSC), known alternatively as the UN Space Command or by its foremost codename Upsilon Niner, was an interstellar, tight-knit alliance of federated, democratic-minded systems spanning a notable portion of the Orion spur within the Milky Way Galaxy.

While the UNSC has taken on many roles of governance over the centuries, it has been most prominent in its aforementioned form following the First Great War: as the overseeing, active body that mutually unites all federated, populated worlds under a single flag. It would retain this brand from 2553 onwards through the late 2600s.

The UNSC was officially established after the Interplanetary War with the intentions of uniting all assets of Humanity as it expanded beyond the confines of Earth's surface. As Humanity expanded across the cosmos, it would come to operate very cooperatively with the Colonial Administration while its subordinate UNSC Defense Force maintained a "healthy" rivalry with the Colonial Military Administration through the early twenty-fifth century, at which point the former gradually drained the latter's capabilities over the course of a century until the CMA and CAA were all but historical.

With the advent of the First Great War in 2525, a call to arms was made and within a decade the UNSC was finally the uncontested ringmaster of the Human sphere, even hopping ahead of the illustrious Unified Earth Government in doing so. It progressively reformed into a military junta-oligarchy of sorts; the first de facto leader of said formation was Fleet Admiral of the Navy Nikolai Petraeus Sherman. He would later posthumously grant this honor to Lord Terrence Hood beginning mid-September, 2552.

Following the Pyrrhic victory suffered at the end of Great War I, a mass reformation was initialized and the UNSC's infrastructure began to change once more. It molded itself into a center-left, democratic alliance of Earth's colonies. The United Nations Directorate was formed in place of the defunct UEG, which supervised the colonies in times of peace, although the UNSC was never hesitant to assume dominance in times of war and/or crisis. Many speculated its combination of moderate socialist ideals and allowance for free reign and growth would lead to one of Humanity's most prosperous periods, and such a scenario was visible during the latter half of the twenty-sixth century. 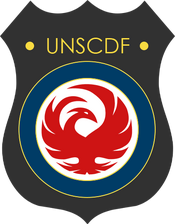 The United Nations Space Command Defense Force has long been considered the crown jewel of the UNSC's existence. It boasts an extensive network of organizations, locations, and roles. Its routine activities range from development of defense technologies to discreet, deep space surveillance, among literally dozens of others. Following the temporary decimation of Reach in 2552, the base of command for the UNSC's armed forces made its way to the distant stronghold of Crossroads, although it still maintains a number of prominent facilities on Earth, Taradia, Mars, and other colony worlds.

The bulk of the UNSCDF's primary combatant force is composed of the five main branches: the Marine Corps, Navy, Army, Air Force, and the reformed Special Operations. Since the mid-2550s, the Army has come to boast the largest enrollment while the Navy owns the largest financial budget, largely due in part to its ever expanding fleet of cutting edge warships. A sixth branch, known as UNSC Special Patrol Operations, operated in a much similar way to the twenty-first century United States Coast Guard, albeit in an orbital/deep space role.

The UNSC armed forces employs a wide range of equipment, often specific to certain branches. Since the mid-2400s, however, the MA37 Assault Rifle has seen continuous use with every uniformed branch under a blanket of various classifications, though newer, more reliable arms such as the NH30 and R66 service rifles have begun to slowly replace their ancient predecessor.

Retrieved from "https://halofanon.fandom.com/wiki/United_Nations_Space_Command_(Infinity)?oldid=686708"
Community content is available under CC-BY-SA unless otherwise noted.