The UNSC Endeavour (hull classification code: DD-347), originally commissioned with the CMA prefix, is a venerable Beagle-class destroyer which had served from the late Insurrection and throughout the Human-Covenant War. Part of a historical line of ships bearing the name, the Endeavour is one of thirty-five destroyers built to trial the installation of state-of-the-art hangar facilities on light-tonnage warships. While still possessing two full-sized fusion reactors, a relatively-high acceleration and as thick a hull as the baseline class, its armaments were lacking thanks to the removal of several Archer missile pods and the downscaling of her axial Magnetic Accelerator Cannons. Despite these significant drawbacks, it remained a solid vessel which outlived the sisters it was built alongside.

Taking up a supporting role during counter-insurgency operations at Mamore and Green Hills, the Endeavour would serve with the Colonial Military Administration during the Insurrection. Soon falling under the authority of the UNSC Navy, the Endeavour would be one of dozens of warships brought together to retake Harvest. Serving briefly in the conflict, the destroyer would participate in dozens of battles in the war, usually being assigned to civilian evacuation duties. By the Siege of Sol, it was one of the only two ships that remained from the Harvest Campaign, with the other being the Marathon-class heavy cruiser UNSC Say My Name. It was finally forced down during the same engagement, where during the Gulf Offensive, it succumbed to the overwhelming firepower of a Covenant battlecruiser. The Endeavour was eventually lifted up and returned to service, and took part in expeditionary operations in the Outer Colonies and Colonial Frontier.

The destroyer that would be christened the Endeavour first began construction in orbit of Chi Rho by the local Diadel Systems' construction company, who had been subcontracted by SinoViet Heavy Machinery to construct a number of modified destroyers for the Colonial Military Administration. It would be first laid down on August 22nd, 2518 as the third of the thirteen destroyers built its batch, which ended with the completion of the UNSC Heart of Midlothian in late-2522. As its previous two sisters allowed Diadel to fix any issue with manufacturing and shipping of parts, the destroyer would suffer no construction delays, successfully launching from its drydock on the 27th May 2519. Nearing completion, it would be deployed on its rigorous set of space trials, which pushed the ship to its early limits. While fairly standard, the destroyer also had to undergo additional tests on its new MACs. It would be discovered as being unusually solidly-built for its class, with its testing crew noting that it may be rated for atmospheric use should later upgrades be planned. It would be formally commissioned as the CMA Endeavour on October 31st, 2520, being assigned as an escort for Battle Group Omega of the 3rd Colonial Fleet.

Led by the Vulcan-class heavy cruiser CMA Executor, Battle Group Omega would be ordered to relieve the strained CMA fleets within the poorly-patrolled FLEETCOM Sector Seven. Characterised by its particular lack of infrastructure and development, the region has grown to become a haven for those fleeing the civil war. As there were concerns that rebels may use the lack of security in this region to perform several successful revolutions, the CMA began taking precautions to prevent the UNSC from finding a reason to operate this close to the edge of Human Space.

Badly damaged and overflowing with starving refugees, the Endeavour suffered a long, slow journey to Sol, and arrived on the inner edge of the system's Oort Cloud on September 21. The captain ordered the ship to make its way towards Mars, although its fusion drives broke down from the abuse during the trip, and it was tugged to Titan instead. It was here that the crew learned that they were the only UNSC ship to escape from Circumstance, and they revealed the details of Operation: LAST STRAW's failure to HIGHCOM. Meanwhile, the Endeavour received rushed repairs to return it to combat status. Luckily, they were permitted to receive new parts from the decommissioned destroyer UNSC Meatloaf, which donated its engines, bridge assemblies, and titanium-A hull to the crippled ship.

The Endeavour was not fully repaired when the order came to mobilise above Earth, where it was assigned into the 39th Attack Squadron of the Seventh Fleet.

Possessing a bulky forward hangar and some expanded infrastructure for holding additional Marines, the Endeavour is an example of the short-lived Beagle-class destroyer. Not intended as a competitor to SinoViet's already-successful Charon-class light frigate, this line of warships are built to function as combat-capable ultra-light carriers, using their superior weapons and armour to fight off other ships of the line while launching strikecraft. Unfortunately, the UNSC admiralty's insistence to place many of these ships into transport roles saw the subclass being cancelled once it was found to be counter-competing with the company's frigates.

The bow of the ship, unlike its sister-ships, does not slope down but instead runs in a parallel line alongside the destroyer's beam, only to slope back up towards the top of the ship. It is at the very edge here where the forward communication arrays are located, with only the central protrusion housing the hyper-accurate LIDAR that is fed directly into its Mark 45 long-range fire director.

The Endeavour on patrol in a nebula.

An above shot, showcasing its slightly bulkier spaceframe. 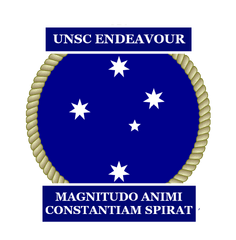 The logo of the Endeavour, worn by the ship's personnel.

The Endeavour nearing completion, during the painting process.
Add a photo to this gallery

Retrieved from "https://halofanon.fandom.com/wiki/UNSC_Endeavour?oldid=715407"
Community content is available under CC-BY-SA unless otherwise noted.