"From nowhere, comes Sacrifice, Liberation, Salvation. Fail not for the unsheltered and the unshielded. Falter not, nor look behind. Race thee against the crashing of the tide. Fail not, for they are the unforgotten."
―Hymn written by Pastor James Norris Atterbare in memory of the Airborne troopers lost during the Siege of Paris IV.

The UNSC Army Airborne, also informally referred as "Airheads", are an elite light infantry component of the UNSC Army that are deployed via fixed-wing or VTOL aircraft within a planet's atmosphere. Focused on planetary defense, the Airborne specializes in deploying behind enemy lines, infiltration and rapid response anywhere around a planet.

For most of its history, the Army Airborne has been viewed as obsolete and unnecessary, a relic of the past that has been largely replaced by exo-atmospheric shock forces as humanity's primary rapid reaction force. Because of this, the Airborne faced scrutiny by both the civilian and military sector for most of its 400-year existence. This reaction by the public only prompted stronger resentment and rivalry between members of the Airborne and ODSTs, culminating in bitter competition between each other, much like their parent organizations. Despite this, the Army Airborne would continue to endure, confronting and defeating numerous challenges that faced them throughout its history, whether it was the emergence of a conflict, or the threat to shut down or dissolve the organization.

Public perception of the Army Airborne would remain mostly unchanged over the centuries, and would not be until the outbreak of the Insurrection before they began to be positively received. But the most significant change of reception would not come until the arrival of the Covenant, where a number of heroic actions and sacrifices would elevate the Army Airborne to legendary status. The war would test their resolve, as it did many UNSC servicemen and women; but for them, they'd suffer one of the highest attrition rates per capita in comparison to other UNSC military departments during the war. As the war continued to worsen, the Airborne would remain the vanguard of defense on many colonies, against all odds and low chances of survival, their stories would inspire millions across human space for years to come.

"Where is the prince who can afford so to cover his country with troops for its defense, so that ten thousand men descending from the clouds might not, in many places, do an infinite deal of mischief before a force could be brought together to repel them?"
―Benjamin Franklin, 1784.

The history of Airborne infantry is deeply rooted in the chaos that gripped and engulfed the first half of the 20th Century. With the onset of the First World War, the world would no longer see warfare the same again. Radical changes and innovations, notably the aeroplane and the advent of aerial warfare provided the prospect of what many thought unthinkable—invasion from the sky.

During the later years of the war, the Allied Powers devised battle-plans in carrying out paratroop drops behind the lines of the Central Powers to disrupt supply chains and logistics, in hopes that it would break the deadlock. However, the war would end before the plans could be taken seriously or carried out. The Interwar period would see a number of experiments regarding the concept of parachuting infantry, with the first ever paratroop jumps taking place in 1927.

The outbreak of the Second World War would again forever alter the way war was waged, this time the utilization of the first ever Airborne operations would play key roles in some of the most significant battles of the conflict. The war proved the effectiveness of airborne assault, and following the war, paratroop forces would see a number of advances and innovations, as well as changes to their doctrine. In the later-half of the 20th Century and well into the 21st Century, airborne operations would evolve, large-scale parachute operations would be replaced by rapidly-deploying air assaults, forever changing the way Airborne units operate.

By the 22nd century, the usage of Airborne forces had been scaled down drastically, quickly becoming obsolete in a time where space-based conflict and orbital deployments took center stage. Despite their dwindling numbers, Airborne forces were still in use by various major military powers on Earth, and would be deployed during the outbreak of the Interplanetary Wars. As unrest engulfed South America in 2162, Airborne units notably from North America, Brazil, and Venezuela were organized under a joint-UN effort and conducted extensive combat operations in the deeper regions of the Amazon rainforest against Frieden and Koslovic strongholds. At first, resistance put up by Frieden and Koslovic forces was met with difficulty, but sustained operations supported by international Army and Marines forces helped shift the momentum for the UN, forcing the fascists and communists to fight a guerrilla war.

With the end of the Rainforest Wars, the use of Airborne forces diminished greatly as the war shifted outward across the Sol system, engulfing Earth's colonies. In 2164, UN military command began training a special operations Airborne brigade, the 47th Airborne Brigade for extra-vehicular activity to combat growing Koslovic insurgency on Luna. This brigade was conceptualized as an UN Army alternative to the UN Marine Corps' Drop Jet Platoons that saw action during the Mars Campaign in 2163. They were first deployed in 2166 to Mare Nubium to continue their training, which also happened to be a hot spot for Koslovic activity. That same year, an attack on Asimov Center occurred, killing thousands and exposing the settlement to the vacuum of space. The brigade engaged the Koslovics and eventually pushed them back, forcing them into a retreat via the surface tubes that connected the Asimov Center to the Luna OCS Academy. The fighting soon found its way into and outside of the academy, with the UN Airborne forces steady gaining ground and incurring heavy losses on the Koslovics, but also caused heavy collateral damage done to Lunar facilities and civilians. The reception of the battle, especially among Lunar residents, heavily criticized the UN Army's handling of the Koslovic threat. This would be the first and last time Airborne forces would be used for exo-atmospheric military operations for more than three-hundred years. However, the 47th Airborne Brigade would eventually evolve into the the 47th Airborne Division, nicknamed the Little Green Men, and would be one of the only UNSC Airborne divisions that continued to train for extra-vehicular activity well into the 26th century.

"Here we go, all the way!
Here we go, everyday!
Marine Corps? God no!
Helljumper? Hell no!
Oh hail, oh hail, oh Infantry!
Born to fly, jump out with me!
D77 soaring through the sky!
Unhook the line, what a way to die!"
―Airborne cadence

"As humanity continues to spread out among the stars, the structure of our Armed Forces will undergo a radical shift in complexity. We no longer deal with the natural barriers of oceans and mountains preventing military maneuver, now it's light-years, the unending void."
―UNSC Army General, Wilhelm Stroheim, 2365.

Much like its parent branch, the structure of the Army Airborne is one of complexity. The Airborne consists of three active components, the the Airborne, Airborne Reserve and Training Command, and the Airborne Special Operations Command. Airborne Reserve works in conjunction with the Army Reserve, conducting an average of four weeks of training annually. The Reserve however is only trained in air assault scenarios, and does not receive parachute training or orbital insertion training as the main Airborne component does. 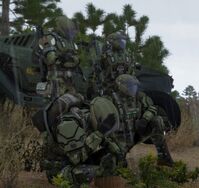 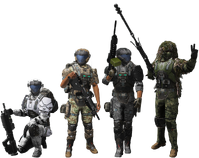 Army Pathfinders during the Battle of Earth.

Joint Colonial Militia and 17th Airborne forces engage in a final stand during the Battle of Leonis Minoris I, February 24th, 2537.

Pathfinder K-Team of the 47th Airborne Division prior to their mission on Cascade.
Add a photo to this gallery
Retrieved from "https://halofanon.fandom.com/wiki/UNSC_Army_Airborne?oldid=714021"
Community content is available under CC-BY-SA unless otherwise noted.