The UNSC-Covenant Remnant war Started in 2552 through present. The war has costed many lives including Nick Lasky.

Humanity was at Jakaeu in 2550. In early 2552 they finally got max population. In late 2552, Khas 'Vadum's Covenant was formed and focused on controlling planets near them. In even later 2552 Khas 'Vadum's Covenant went to take the planet when they were intercepted by UNSC forces in orbit of the planet. Admiral Nick Lasky was in charge of the Defense fleet. The fleet was made up of 15 Marathon-class heavy cruisers and 32 Stalwart-class frigate. The fleet opened fire on the Remnant fleet, but not destroying anything. In attempts to get rid of the fleet, The flagship fired upon the Dark Silence. The Dark Silence in return opened fire on the Flagship Nick was on. Nick ordered the fleet to destroy the Carrier, but it was too late. The ship got cut in half and exploded, killing Nick. Jack O'Malley was given command of the fleet and ordered a missile attack on the neck of the ship. 76 missiles fired, hit the neck of the ship and separated it into two parts. The Remnant fleet slipspaced away and the battle was a win for the UNSC. 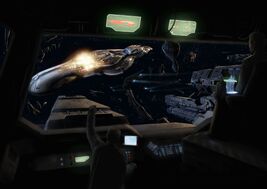 Despite wining the battle, Jack knew that the Remnant would be back. About 1 month later, Khas 'Vadum let a attack force so big, it could wipe out a civilization in a matter on hours. 7 CAS-class assault carriers, and 52 CCS-class battlecruisers exited slipspace near Jakaeu. Khas 'vadum had no-mercy for the humans. He orderedd a full scale bombardment of the planet and wiped out the defense fleet. Jakaeu was nothing but glass.

With Jakaeu lost the UNSC had to find a planet to rest at till they could find a planet to be stationed at. But it seemed where ever the UNSC was, the Covenant was not far behind. The Covenant fleet Fleet of Obsolete Vengeance exited slipspace right before Duland. The Covenant flagship, Solemn Trail led the battle. The UNSC was unaware that they where under attack until the last second. BOOM! Jack O'Malley looked around to see a armada of covenant ships. It seemed it was hopeless to fight so the UNSC slipspaced away.

With One supercarrier gone, and one in production, Khas 'Vadum ordered all of his ships to gather near the Gamma Halo (Installation 03). With 7 CAS-class assault carrier, and about 50 CCS-class battlecruiser, and CRS-class frigates.The battle started in Early 2553. Now with one CSO-class supercarrier the Covenant was ready. Khas 'Vadum led his fleets to Installation 03. When the covenant left slipspace above the Halo ring, they where surprised to see what they saw. The UNSC was engaged with a flood CAS-class assault carrier. The UNSC immediately engaged Khas 'Vadum's fleet. Khas 'Vadum ordered all of the capital ships to go to the rings surface except 2 CAS-class assault carriers. However there was more flood on the halo ring than in the sky. The UNSC sent ODST's to the surface to make sure that Khas 'Vadum did not attempt to fire the halo ring. Luke O'Malley was sent down to the surface with all of the other ODST's. Once the ODST's where deployed, they immediately got resistance from Legions of covenant and flood troops. Luke ordered all ODST's to focus fire at the flood. The flood cornered Lukes forces near a destroyed tank. Khas felt a little bit of sympathy for the humans, and ordered his forces to help luke. The flood was forced to back off till the next wave of the attack. Khas ordered all of his ships not to engage the UNSC fleet. The covenant remnant, and the UNSC worked to fight the flood. About three hours later, the flood main force was killed. However one of Khas 'Vadums high command thought that the ring should be fired. He took a force to find the Index, and activate the Halo ring. Duta 'Vaham found the index and was going to activate it, but he needed a human. When Khas, and Luke found Duta they told him the truth of the halo rings. One ODST trooper tried to shoot duta, but his force took him out and started to engage Luke and khas's forces. Duta grabbed Luke and forced him to activate the ring. With the index activated Duta attempted to kill luke, but he failed, resulting in the loss of his life. Luke grabbed his knife and stabbed Duta in the neck. Duta's forces where forced to surrender to Khas. The index was pulled out before the ring was fired. Khas led his forces off the ring and left for Jakaeu.

Retrieved from "https://halofanon.fandom.com/wiki/UNSC-Covenant_Remnant_war?oldid=679212"
Community content is available under CC-BY-SA unless otherwise noted.