The Swords of Sanghelios is the leading military force in Sangheili space, defending the Sangheili Republic and crushing the Covenant. The Sword works as an expeditionary force, defence unit, exploratory unit, and many other vital military roles. It also encompasses unique unit formations and military orders from across Sangheili space. 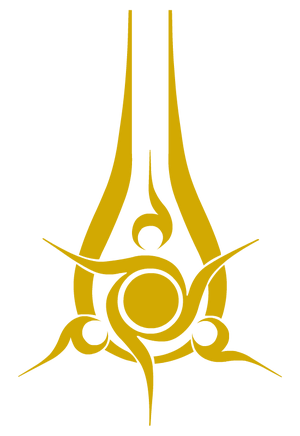 The Republic's military, the Swords of Sanghelios, differs from the UNSC, in that rather than having several branches to denote special purposes, the Republic only has one single military force. This singular focus gives the Republic Military a clear chain of command, and a stronger cohesiveness in the field. The Swords are highly independent, being free from much of the High Council's control.

The Sword focuses on large scale military action, rather than focusing on small squad based tactics, like the UNSC. When both on the offence and defence, the Republic relies on a large amount of tough, reliable and head strong soldiers. In recent years more and more emphasis has been placed on chain of command, small unit tactics, survival over honour and mixed/joint forces co-operating in unison. In recent years, improved technology has opened the path for new tactics, and new methods.

The Sword forces has grown, and now drawn a tithe of warriors from every world in the Republic, with each State expected to provide able-bodied warriors for the Republic. Trained and equipped, they then become part of the glorious Sword, an honour for any warrior. Despite the breaking of the Covenant Hegemony, the Sangheili still draw on allies in the form of levy troops. These are drawn from Unggoy settled in Sangheili territory, Some allied Kig-Yar clans still sign contracts with the Sangheili for work, and Lekgolo still provide their gestalt hives for combat purposes. There are also forces drawn from Jiralhanae and Human allies. These levies are drawn into a number of branches, usually without distinction for race.

Grenadiers are akin to line infantry, forming an important element of the SOS battleline, engaging enemy forces directly on the field. They also form occupying troops.

The Storm Levies are shock troopers, launch all out assaults to oust the enemy.

In any engagement, the Fleet Master is the leader of any operation. Fleets are often ad-hoc constructions, less rigidly structured that UNSC fleets. Fleets can vary from a handful of ships, to hundreds. Regardless of the ship, or the size of the fleet, the commander of a starship is always called 'Ship Master' while the commander of the fleet is called 'Fleet Master'. Most often, they are Generals, and any variance in posting is due to individual talent or experience. The Fleet Master is responsible for both promotion and procurement within his fleet, organising new ships, and officers to command them. For operations, all warships and starcraft are considered under the Fleet Master's command, unless needs are dictated by a Field Master.

Their warships has seen numerous changes, especially with them now upgrading all their ships to sport torpedo defences and to improve ship-to-ship weaponry. They have also invested heavily in electronic-countermeasures, and Associated Intelligences, making each ship much more lethal.

Many starships used by the Sword are ships taken from the former Covenant, and rejuvenated through heavy augmentation, such as the Templar-class Corvette, Avenger-class Heavy Destroyer, Retribution-class Battlecruiser, and the Venerator-class Assault Carrier. However, they have also reintroduced pre-Covenant vessels, recovered from graveyards and long abandoned fleet posts, and then refitted to modern standards, such as the Judgement-class Man O' War, Prosecutor-class Blockade Runner, and Crusader-class Brigantine. They've also introduced new designs, such as the Penance-class Cruiser, Sanctifier-class Support Cruiser, and Adjudicator-class Combat Supply Ship. The highlight of the Sword naval forces is the Sanghelios-class Dreadnaught. Built on pre-Covenant designs, the Sanghelios-class is a massive warship and a monstrous star-behemoth, and strikes fear into the Covenant. Republic ships are superior to older Covenant vessels, by virtue of continuous upgrades, and superior maintenance protocols, ensuring each ship is well maintained. They have begun to experiment with more radical technology for starships, featuring limpet ships and drone vessels.

While secondary to the Naval Command, the ground forces are considered equally important to the Navy in operations. Like the naval forces, they are lead by a General with the title of 'Field Master' who delegates command to other Generals. Forces can vary, with Legions, which are equal in size to UNSC divisions, or smaller Warhosts. All warriors, armoured vehicles, and atmospheric craft are considered to be under the command of the Field Master. Often a number of ships, and star fighters, are placed in his command to support operations. His officers are hand picked for the role, and expected to give their best.

Infantry wise, little has changed from the Covenant War, with rank structure and support remaining the same, though the method of ranking and the nature of honour has begun to change. The frequency of medics and scouts have increased. Despite this 'modernization', melee weapons are still common, and strict codes of conduct and honour are still considered of highest importance. With their armour, a much more thought out approach has been taken. Many vehicles that were previously hindered by religious oversight have since been freed from those shackles, and have become vastly improved by Sangheili ingenuity.

The old marking schemes of the Covenant have since been discarded, replaced by soldiers with only singular markings, the crimson and ivory of the Swords of Sanghelios. There are special exceptions for commanders, officers, and special units.

All of the Swords's special forces fall under the broad umbrella of the Special Warfare Group, which is lead by the clumsily translated Special Operations Master, who delegates to Special Operations Commanders. The nature of the role, and the SWG itself, is highly malleable, with a wide variety of forces under their command. Most often, a small detachment of the SWG is placed under the command of a Field or Fleet Master, but in rare instances, an SO Commander has lead a task force of his brothers into the fight.

It is primarily divided into two main divisions; Fleet Security and Special Operations. Fleet Security handles operations that directly impact the operations of a fleet within a theatre. They perform reconnaissance against enemy positions, deploy specialists into operations, and provide counter-terrorism protection. Special Operations performs clandestine missions, and conducts unconventional warfare. Other units have sprung up amongst them, making an ever-expanding force.

A broad category, this group falls directly under the purview of fleet commanders. Fleet Security is primarily concerned with the protection of the fleet, in both a combat and intelligence manner. The bulk of Fleet Security are well trained, disciplined warriors, trained to guard their vessels as if it was their own Keep, protecting it against infiltration, and against boarding action. They also guard fleet installations, such as defence platforms and shipyards. They also specialise in counter-terrorism, stopping terrorist attacks against the fleet. As such, they closely guard many facilities and ships with a vigilance not seen in many Sangheili. Trained for zero-G combat and close quarters fighting, they have a variety of tactics and equipment at their disposal. They also include Mgelekgolo as protection. Fleet Security also contains two important sub-divisions.

Experts in zero-G and urban combat, Rangers utilise anti-gravity packs to allow them limited periods of flight. Rangers were originally conceived for deep-space operations, such as boarding operations, or infiltrating space stations. However, their equipment and training made them a fearsome force in urban combat, where they could leap from building to building, finding high perches from which to snipe from.

Special warriors, selected for their patience and reserve, they are equipped with stealth gear allowing them to infiltrate positions unseen. They are distributed through normal ground formations, with the goals of gathering intelligence, collecting information and reporting back. They also enact countermeasures against threats to the fleet itself, such as air defence batteries and weapons of mass destruction. They report directly back to high ranking fleet officers, rather than their immediate superior, or field commander.

A simple name for an extraordinary force, the Special Operations unit is the home of the Swords's best. Taking the most experienced troops, they are given the best training and equipment, and sent on missions that ensure the protection of the Republic itself. Armed to the teeth, and equipped with stealth technology, they infiltrate enemy positions and quickly and quietly complete their objectives. Warriors without compare, they are patient hunters, quietly making it to the enemy position then tearing them apart in a tornado of violence. Special Operations also engage in counter-terrorism operations, taking down domestic threats, as well as terminating emerging threats such as pirates and warlords. Special Operations usually move ahead of the main force, to capture strategic objectives, or sabotage the enemy. However, their roles are numerous.

An elite amongst the elite, Silent Shadow are a small, and highly independent formation within the SWG. Carrying experimental armour and weapons, they conduct sensitive missions, and develop new tactics. Originally conceived as a counter to 'Demons' deployed by humanity, Silent Shadow match them in skill and ingenuity on the field.

An executive branch of the Sword, the Assassins are the cold vengeance of the Republic. Instead of brash, noble warriors, Assassins are cold, calculating killers, peerless in the art of executing their enemies. Assassins are called upon to silence the Republic's enemies, terminating domestic threats such as rebel organizers, and killing enemy leaders, such as Covenant officers. Experts in their craft, they are living shadows, melting into corners, vanishing from sight, and infiltrating the highest security facilities without rousing the alarm. When it comes to ending their target, they use any method needed, from a hidden blade, to a sword in the back, a long distance sniper shot, explosives, poison, or even making it appear as an accident. Only at the disposal of the Swords's high command, they are strictly to be used against targets of strategic military significance. However, that has not always been the case.

Modelled on ancient Sangheili forces, Commandos are expert shock troopers. Equipped with specialist armour, they are a high-speed, low drag force, with good gear. Taken from some of the most industrious and brave warriors the Republic has to offer, the Commandos are known for being resourceful and flexible. The Commandos specialise as shock troopers, launching sledgehammer blows against enemy positions, as infiltrators, infiltrating enemy lines and sowing discord and chaos, and as quick reaction troopers, responding to new threats. Commandos maintain a high level of readiness at all times, meaning that they can quickly be redeployed to face growing threats before a larger force is ready to be deployed.

A relatively new branch, they are the product of the Swords of Sanghelios' paradigm shift in air assaults. Hand-picked from the best pilots, they are expert pilots, cross-trained with a variety of craft. These experts aren't just good pilots though, they specialise in setting down their charges as in the most dangerous warzones. They use a variety of ships, including the Phantom, the Phantom Gunship, the Stealth Phantom, the Spirit, and even the Lich Heavy Dropship. Avengers are brave, to the point of fearlessness, and can land even under heavy fire. They're also skilled combatants themselves, for surviving the loss of their ship.

Another new formation, Intruders are 'first contact' forces for use during planetary invasions. Equipped with heavy armour, and close quarters weapons, they are the first wave of soldiers, going down in drop pods. Preferring to land in the midst of the enemy's position, they storm them at short range, taking enemy positions through sheer tenacity and violence of action. Once the position is secured, they hold it until reinforcements arrive. Intruders tend to be stubborn and resilient, but also foolhardy.

Retrieved from "https://halofanon.fandom.com/wiki/Swords_of_Sanghelios_(Revenant)?oldid=720726"
Community content is available under CC-BY-SA unless otherwise noted.