"No matter the name. No matter the conflict. No matter the legacy. These ships and their crews exemplify Man's unrelenting resolve for victory."
―Captain Weisheng Jo, Commander of the UNSC Alexander's March.

The Sun Tzu-class Heavy Destroyer (hull classification symbol: DDH/DD) is a family of next-generation naval destroyers developed and deployed at the tail end of the Human-Covenant War. Equipped with new technologies and developed with new military doctrines in mind, the Sun Tzu and its sister vessels were reminiscent and yet starkly different from their Great War counterparts. The Sun Tzu-class takes their name from famous and revolutionary figures of military history, hence the naming of the lead ship after the Chinese general and philospher, Sun Tzu who famously wrote the Art of War. The Sun Tzu, overall, is a complete overhaul of previous naval destroyers built for service with the United Nations Space Command; one of the most prolific changes include a size upgrade from the typical frigate-tonnage and length to measurements akin to a light cruiser which provide greater storage for weapons, personnel, and cargo. 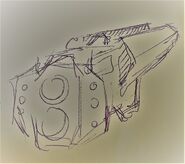 Add a photo to this gallery
Retrieved from "https://halofanon.fandom.com/wiki/Sun_Tzu-class_Heavy_Destroyer?oldid=706097"
Community content is available under CC-BY-SA unless otherwise noted.