Shch 'Nodotee is a Covenant Councilor and commands the Combined Regional Fleet of Contrite Purpose, from his flagship Bloodied Remnants.

Originally a Fleet Master, later promoted to a member of the High Council, specifically the High Council of Masters. Shch 'Nodotee is the youngest Councilor to date, but one of the most influencing. Shch is a personal friend of the current Arbiter, he was greatly in the minority when it came to the punishment for the Arbiter. Later, 'Nodotee took command over his old fleet and aided the Covenant Separatists.

Shch 'Nodotee first enlisted as a Major Domo, his family name was well respected and got him a low officer position. He was placed in charge of a squad of Unggoy and two other Minor Domo Sangheili, one Minor Domo was Bergenond Amrothee, a good friend of 'Nodotee. Shch 'Nodotee preferred the Particle Beam Rifle for his personal weapon, being his squad's sniper. After the Battle of Eridanus II in 2530, Shch 'Nodotee was wounded saving his Field Master. He was then promoted to Ultra for his acts of bravery. In the 2535 Battle of Jericho VII Shch was promoted again, this time he didn't save anyone though. He was given the rank of Field Master for his tactical brilliance in the fight, managing to lead his division to victory and eliminate the enemy leader. In 2539, while the fleet he was stationed with was assaulting a human inner colony world, the ship he was on was hit by a MAC round, killing the Ship Master on board. Shch 'Nodotee was in the control room speaking with the Ship Master when they were hit by the MAC. He was the only surviving elite in the control room, so as the ship's Field Master he took control of the ship. Shch 'Nodotee then personally piloted the Assault Carrier out of the MAC killzone. Once out of the killzone, he positioned the ship and ordered them to open fire on the planet. The fleet's Imperial Admiral then made 'Nodotee his second in command, a Fleet Master. Shch 'Nodotee remained on the Assault Carrier he saved, he then made it his personal capital ship.

As the second in command of the Fleet of Contrite Purpose, and a Fleet Master, he was admired for his seemingly random but brilliant tactics. However, he was never able to fully use his power of command because of his commanding officer, Imperial Admiral Vysar Tar 'Xztanee of Contrite Purpose, was more inclined to using standard "overpower and eliminate the enemy force" tactic.

The Engagement of Charybdis IX, after the fleet was ambushed in 2540 by a human assault force and almost destroyed, his commanding officer was in too deep. The fleet only survived because of Shch's dangerous tactics. He moved his capital ship, Bloodied Remnants, around to flank the humans, while he used Vysar Tar 'Xztanee as bait. This was a more risky plan, considering 'Xztanee was almost destroyed by the human attack. None-the-less though, Shch 'Nodotee saved the rest of the fleet. When the Prophet of Truth heard of the engagement, he offered two options to 'Nodotee: become an Imperial Admiral, and lead Contrite Purpose, or become a Councilor, and lead the Covenant. Shch 'Nodotee chose the latter, and became a Councilor in August of 2540.

This battle is what got him promoted to Councilor, he impressed the High Prophet of Truth. Afterwards, he gave up command of Bloodied Remnants, to another Zealot. Shch 'Nodotee still remained on the ship though, he used it as his makeshift office.

Shch 'Nodotee never really cared much for the Prophet's Great Journey, but rather focused on protecting his fellow Sangheili and the political/military life of the Covenant. However, he still believed in the Great Journey, until the Covenant found a Halo, then it was all clear. He was one a the few Council members that avoided the assassination the Jiralhanae carried out against the Sangheili leadership. 'Nodotee survived mainly because he was no longer on High Charity, but with his fleet.

Presently, 'Nodotee is fighting on the side of the Covenant Separatists, and is in contact with his old friend, Bergenond Amrothee. Although Councilor 'Nodotee and a small distachment of his fleet are currently lightyears away, engaged at Installation 03.

Shch 'Nodotee's original lance. They were stationed on the CCS-class Battlecruiser, Devastation. The Battlecruiser is part of Contrite Purpose, however, it was often sent out to other task forces to aid Covenant fleets. On of it's more memorable missions was the Battle of Eridanus II.

The lance consisted of one Major Domo ('Nodotee), two Minor Domo Sangheili, and 7 other Unggoy.

The lance had the use of various ground craft and space craft throughout it's existence, here are some.

The lance saw little action, only taking part in one ship to ship operation. The lance was loaded into a Boarding Craft to engage a UNSC destroyer. The lance was inserted into the ship's rear hanger. 'Nodotee took point, being the first one in the human capital ship. His squad followed closely, after the hanger was secured, 'Nodotee's lance went for the bridge. Along the way, they made a stop in the CryoLab, killing the technicians there. The lance then continued on their set path to the ship's control room. Once there, Cancang was aiming for the some of the senior crew members but missed and hit the main firing control, disabling the destroyer's weapons. Odch 'Siburee then did Cancang's job for the grunt, killing most of the senior personnel within the room. 'Nodotee then proceeded to execute the ship's Captain. The lance had taken control of the destroyer. After they were tasked with defending the room until the Anti-Matter Bomb could be brought in. After the Anti-Matter Bomb was placed and ready to go, the lance quickly rushed to the boarding craft, Devastator. Once the fighting was over, Cancang was made a Major Unggoy for disabling the weapons. Several other Unggoy were also added to the lance, to make up for dead and wounded.

In 2530, the lance finally saw some real action. The Fleet of Contrite Purpose had joined with a large task force getting ready of engage the human forces at the Battle of Eridanus II. The battle erupted quickly, throwing 'Nodotee and his comrades into the center of it. The went ground side almost instantly, as their Spirit desended through the clouds of the planet. They were tasked with helping establish a command center. The lance along with several other groups of Covenant quickly became pinned down atop a small hilltop just outside a rather large city. They were quickly losing officers, until 'Nodotee was the highest ranked among them. With his recent field promotion, 'Nodotee led the remaining 37 Covenant soldiers away to a much more defensible position, on a cliff further away from the city. 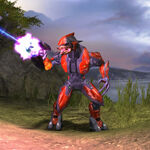 Once there, they were reinforced with Spec Op soldiers that came in Orbital Insertion Pods. Among the reinforcements, was the legion's Field Master. The Field Master quickly went to work, regaining the lost ground. With revived vigor, the Covenant forces slowly advanced on the human encampment. 'Nodotee's lance was ordered to give sniper support. So, 'Nodotee and his lance, along with many other Jackals and Elites stayed back along the ridge.

The UNSC ground forces fell back away from the incoming Covenant horde. The humans however, had set up snipers of their own, waiting just inside the city for the Covenant. 'Nodotee and his lance were then ordered to proceed into the city with the rest of the legion. Once they regrouped, the Field Master joined up with 'Nodotee's lance. As they came over the hill, the UNSC snipers opened fire into the legion, many elites fell instantly. One of the high powered rounds was aimed at the golden armored Field Master, a would be fatal head shot. However, this was avoided by 'Nodotee's jump, hitting 'Nodotee in shoulder.

'Nodotee was quickly taken out of combat. Shch 'Nodotee later awoke on board a CCS-class Battlecruiser's med bay. The Field Master stood over him, saying that if it wasn't for 'Nodotee taking the bullet for him, he wouldn't be alive today. Shch 'Nodotee was then promoted to Ultra for his acts of bravery.

Shch 'Nodotee was a Fleet Master, and second in command of a fleet. After a close victory thanks to Shch, he was rewarded by being promoted to Councilor, the highest rank any elite could attain. The Councilors shared power with the Covenant Prophets on the High Council. Making most of the day to day decisions of the Covenant, militaristic and political.

Before Shch 'Nodotee attained the rank of Councilor he was a Zealot Fleet Master. He was the second in command of the Combined Regional Fleet of Contrite Purpose. The fleet itself was led by an Imperial Admiral. However, after saving the fleet's former flagship and it's leader, he was promoted to the rank of Councilor for his superior military tactics. Although, some think he was only promoted to Councilor to get him away from the war. Shch 'Nodotee has been deemed by some as the riskiest Commander in the Covenant, using his own superiors and other fleets as bait to win the fight.

Later on, after the start of the Civil War of the Covenant he helped lead his stunned comrades. 'Nodotee then assumed command of the fleet Contrite Purpose and started his new campaign against the Jiralhanae from his flagship Bloodied Remnants.

Shch 'Nodotee, like all other Councilors, wear a ceremonial armor that is quite distinct, a silver color with a tall and ornate crested helmet. Councilor Sangheili wear a large white headpiece instead of the standard Sangheili helmet. They also possess extra-strong energy shields, similar to those possessed by the also highly-ranked white Ultra Elites. Although, there was one modification 'Nodotee added to his armour, Active Camouflage. Councilor 'Nodotee added this device so he could observe battles directly without being noticed by other Covenant and UNSC alike. The Councilors are extremely skilled fighters who favor Energy Swords, but can use any weapon they are given.

Some of the more outstanding troops that have connections with Councilor 'Nodotee. All of which are currently at Installation 03.

A Special Operations Officer on Bloodied Remnants. One of Shch 'Nodotee's closest friends and squadmates. Originally a Minor Domo, and part of 'Nodotee's first lance. 'Siburee has been by 'Nodotee's side for many years. After rising through the ranks, 'Siburee is now a Special Operations Officer. He's currently following Councilor 'Nodotee on Gamma Halo as one of 'Nodotee's two Spec Op bodyguards. Odch has become 'Nodotee's personal pilot, shuttling Councilor 'Nodotee all over Installation 03. After the battles of Installation 03, Odch was promoted to Zealot. He now commands a CCS-class Battlecruiser.

A Major Domo Sangheili on board Bloodied Remnants. As part of the command crew of an Assault Carrier, Eych 'Euqoree was a very important soldier. However, he became even greater when 'Nodotee named him Half-Commander, and second in command of Bloodied Remnants. He's now on Gamma Halo with 'Nodotee. However, after 'Nodotee found out the truth about Halo, Eych took two ships and declared himself Fleet Master of the Loyalists Task Force. (Deceased)

A Zealot Ship Master that served with 'Nodotee. Long ago he was in command of 'Nodotee's flagship, Bloodied Remnants. Councilor 'Nodotee soon realized that Ffch was a coward and didn't deserve commanding 'Nodotee's flagship. 'Nodotee replaced Ffch, with himself. 'Nodotee then took Contrite Purpose to Installation 03. While at the Sacred Ring, Ffch was infected by the Flood. Ffch is now leading the Flood hordes. (Deceased)

The Supreme Commander of Contrite Purpose, and Councilor 'Nodotee's second in command. Little is known about Ryse, but his Reverence-class ship, Glorified Vengeance recently joined Contrite Purpose. Ryse has taken well to the new fleet, but he has yet to prove his true worth.

Some of the more famous and important battles Councilor 'Nodotee has been part of.

Retrieved from "https://halofanon.fandom.com/wiki/Shch_%27Nodotee?oldid=656326"
Community content is available under CC-BY-SA unless otherwise noted.