SPARTAN-K117, known as Viking, is a member of the 117th Special Operations Regiment, and leader of Forth Battalion, Kilo Company, Einherjar Platoon, Forseti Squad.

Born on the harsh arctic world of Asgard, Sigurd was raised by his parents and sister in their small cabin in the Asgardian wilderness. His father, a Human-Covenant War veteran, Sergeant of the Asgard Patrol, and his mother, an former ONI agent, moved to Asgard after the war had ended. After settling in and having their child, they raised him to be a survivalist, which was necessary in Asgard. His father taught him the skills to hunt, create a fire from basic environmental objects, and a shelter. His mother taught him to fish as well as clean and cook food when in the wilds.

After being enrolled at Freyja Primary School. He was an excellent student, both well disciplined and very intelligent. This, however, gained the attention of the Office of Naval Intelligence S-IV Recruitment Group One. Being noted as physically, mentally advanced for his age, he was one of many to come. During his hike home, he was kidnapped by agents, and a flash clone replacing him, which later died from pre-set conditions. He was shipped to Camp Sparta to be trained for the S-IV program.

Sigurd was born on the UNSC fringe world of Asgard, a planet renowned for its incredibly cold winters. His parents were descendants of the original colonists, which came from the Faroe Islands. Upon further study, his oldest ancestor was a Hersir who led raids against France, particularly a raid against Paris around 900 A.D. In the year 1000, his ancestors raided various monasteries in Britain, before finally ending his raids. As time passed, his ancestors moved to Poland, and then finally settled back in Sweden.

After being transferred, Sigurd was quickly thrust into the Spartan Training Program. During the first phase of training, refereed to as the indoctrination phase, was the grueling physical and mental exercises used to break the future Spartans, and allow the UNSC to 'reprogram' them. During this phase, Sigurd-K117 was often teamed up with Clyde-K102. These two would form a close friendship, and was Sigurd's first real friend. It was also in this time when Sigurd was quite aggressive, and often fought with another Kilo Company trainee, Alexander-K132. Their fights started when Alexander accused Sigurd of tripping him on a Hill 303 run, a accusation Sigurd strongly declared was false. During the night, Alexander and his other friends attempted to beat Sigurd in his bed by holding him down and hitting him with soap-filled pillows. Sigurd was able to escape, and managed to hold off his attackers until trainers arrived. He had also managed to break Alexander's nose with a headbutt. It was also in this phase where Sigurd learned of his Viking heritage.

During Phase 2, Sigurd showed off his combat prowess. During this phase, the Spartans were taught basic combat training, further physical and mental exercise, and UNSC culture. When firearms introduction came around, Sigurd quickly drifted to the standard MA6A ICWS. During this phase, the Spartans were also taught various martial arts forms in case of close quarters combat. During this phase, Sigurd adopted the Stav martial art. It was also in this time when their trainers would attack the recruits. During one raid, Sigurd was able to hide along with four other Kilo trainees, while the others were rounded up. The group, led by Sigurd, had managed to ambush two trainers as they passed and knocked them out. Sigurd and another Spartan, Cain-K029, grabbed the guards TTR loaded M7 SMGs. With precision, they managed to draw the trainers away while the other two Spartans freed their comrades, however the pair were hit and knocked out. When they awoke, they were greeted by the S-IV program heads, who congratulated the pair, and promising them that Cain will be team leader, and Sigurd being a squad leader

Phase 3 was a slow period for Sigurd. With the promise of a squad leader position, Sigurd spent most of his time on squad based tactics and exotic weaponry. During this period, Sigurd also spent much of his time studying ancient battles and commanders, learning from past mistakes and how to exploit an enemies weaknesses in combat.

During Phase 4, Sigurd had the toughest time adjusting too. His closest friend, Clyde, died during the augmentation process. Sigurd, although wracked with grief, did not attend therapy as suggested, and went on to the advanced combat training with the rest of his brethren. During this phase, Sigurd was introduced to the HOPE Pod, an improved version of the SOIEV of the Human-Covenant War. After he hit the ground on his first combat drop, Sigurd quickly sprung to action. It was also during this phase when the 'Morita Incident' occurred.(Explained later)

Phase 5 was the most exciting for Sigurd, as it introduced him to the various allied alien races, through their equipment. Almost instantly, he was drawn to the weapons of the Jiralhanae. The brutish nature, and perfect blending of savage close quarters weaponry, combing with the weapons own ranged power. His favored weapon amongst the alien equipment was the Type-15 Assault Rifle, the new standard weapon of Jiralhanae forces, and the Type-5 Energy Weapon/Axe.

During Phase 4 of the Spartan Training Program, on a combat training mission between a 12 man Kilo Company squad led by Sigurd, and an ODST training team of 20, Sigurd accidentally killed an ODST trainer and wounded five others in a berserk-like rage. The mission started in the Morita Training Station, a mixture of Urban combat and light forest. The mission for both teams was to eliminate the other using TTR rounds, and weapons of their choice. The Spartans were able to get the jump on the ODSTs quickly, ambushing them as they searched a room, and knocking out four. As Bravo team began a sweep of the trees, they were caught in a trap, and hung upside down by their feet from trees. Sigurd and Alpha team proceeded to their location, and found Bravo team 'dead', shot execution style, except for one. As the team began to help him, they were caught by an ODST team from a nearby building. Sigurd, in cover, was forced to hear the screams of his squadmates. He burst to the building and ambushed the ODSTs, except they did not have time to react. Sigurd overpowered the ODSTs, and by the time his rampage was done, one ODST lay dead, five in serious condition. Sigurd was tranquilized and put in lock down. It was determined that his rage came from hearing his squadmates screams, coupled with extreme stress. A doctor had prescribed him with stress relief pills, which were to be taken daily. 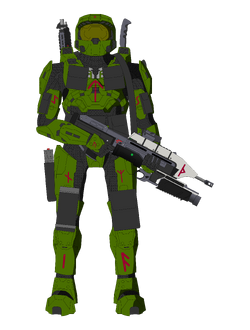 Sigurd has thick brown hair, just barley making regulation cut. He also has a rarity among his IV brethren, a beard, which he keeps short enough for comfort in his MJOLNIR armor, but long enough for his personal tastes. His MJOLNIR has had standard equipment attached, however he has painted multiple Norse runes onto his armor, all in the blood of the Chieftain Braktus during Operation: WARDOG, but later painted on in the same color.

K117 in times of extreme stress or danger, has been reported of going berserk, literally rushing headlong with incredible strength, even for a SPARTAN, and ripping his foes apart. However, if controlled, he has proven to be one of the deadliest of the SPARTANS, in training exercises in virtual reality, he has fought Brutes in hand to hand contact and defeated them.

Despite their rigid lives and little contact to the outside world, K117 is a spiritual man, and has been seen meditating prior to battle. He has also had his assault rifle painted with various runes. Despite the various religious symbols on his armor and weapons, he is agnostic, and uses the various symbols out of respect for his ancestors.

Outside of battle, Sigurd is increasingly distant and prefers to be alone. Often he reads the stores of Norse mythology, of Gods and giants. He also studies the Art of War, and applies the techniques taught into battlefield usage. When the Necros arrived, he believed that the End of Times, the final battle, Ragnarok was upon humanity, and intensified his training.

"These men and women are my brothers, whether there born on the streets of Earth or the wastes of Dust."
―K117

"I never really spoke to the CO, however his actions speak louder than words."
―K117 on his commanding officer, SPARTAN-012

Sigurd does not think of Riker as just a trainer, he see's him as a father figure, one who the SPARTANs of his company should aspire to be.

"A strange bunch that make up our galaxy. Honor bound lizard-like people, giant gorillas, and cybernetic mechs, among others."
―K117

Of the races in the Milky Way, Sigurd studies the Sangheili, Machina, and Jiralhane technology and tactics. He studies the Sangheili warrior tactics and their overall sense of honor. The Machina intrigue him, as they are essentially brains trapped in a mobile shell, and their sense of individuality. He also studies Jiralhanae weaponry, their seemingly flawless combination of long range firepower and close range, razor sharp blades.

Sigurd is a tenacious fighter and brave warrior. Trained in the art of CQB, especially using a combat tomahawk. He also has a great sense of honor, and will honor a challenge to a duel, and order his men to stand down. He is also a proficient rifleman, capable of drilling tight groups into enemies with an MA6A or M6L. His life on Asgard, and the upbringing of his mother and father have made him a great survivalist, especially in harsh arctic wastes and temperate forests.

Despite his strengths, he is not invincible. After the death of his best friend Clyde-K102, Sigurd became increasingly angry and distant, and developed a berserk rage in combat and training exercises. He is also a terrible sniper, and strays away from the possibility of sniper duty, preferring the close quarters combat. He has a tendency to have to have his armor repaired on an almost daily basis, however much of the damage is simple, but it is still time consuming.

Retrieved from "https://halofanon.fandom.com/wiki/SPARTAN-K117?oldid=703580"
Community content is available under CC-BY-SA unless otherwise noted.