"Surprisingly similar to an unruly teenager. Wild and powerful. Fights with a brutality and ferociousness on par with Brutes. At the same time incredibly clever and a capable tactician. Once a target is in her sights, she will fight with every ounce left in her body, and then some more."
―Codename: MEDICI

"I have chucked Grunts out of airlocks, whipped Jackals with snakes, stomped Drones into paste, rammed Hunters with a crashing Pelican, suffocated Elites with their own mandibles, drowned Brutes in bathtubs and, finally, fried Innies alive. That's about all you need to know about me."
―Rachel-343

Lieutenant, Junior Grade Rachel-343 (full name Rachelle Rébecca Kempa at birth, Rachelle Peterson post-adoption and Rachel Hawke after enlistment with the UNSC Military Intelligence Division, also known by the designations Sierra-Three-Four-Three, Codename: ANDRASTE[4] and Winter Five) is a highly experienced operative and junior officer of the UNSC Navy. She served during the last years of the Human-Covenant War as a SPARTAN-II Commando of Project ARES, the third class of the SPARTAN-II Program, and later attached to Winter Team. She was a notable participant of the Paris, Bliss, Hydra and Reclamation campaigns. Following the end of the Great War, she participated in Operation: SAVIOUR alongside her mentor, Laszlo-108, until it was called off in 2596. After this, she assumed the role of commanding officer of Team Albus, the Asymmetrical Action Unit of Albion Company of the new 117th Special Operations Regiment.

Born on the colony of Kholo on January 7 in the year 2535 to a senior Colonial Military officer and a psychiatrist, Rachel was raised in close proximity to one of the CMA's last garrisons at a fuel depot on the colony of Verent, until the Covenant attacked the colony in November 2539, the ensuing battle taking the lives of most of her family, after which she and her sister were relocated to an orphanage on Skopje.

Several weeks after arriving at the orphanage, both Rachel and her sister were adopted by the Peterson family, the heads of Skopje's main ship-production company, though disagreements between Rachel and her new family eventually caused her to run away from home. Shortly after, she was abducted alongside 49 other candidates for Project ARES and transported to secret training grounds on Tantalus. For the next eight years, she was then trained by Captain Laszlo-108 and Master Gunnery Sergeant Dean Jackson to become a SPARTAN-II Commando.

After undergoing augmentation procedures and receiving the Semi-Powered Infiltration Armor in 2548, she and the rest of Cyan Team went on Operation: RIPOSTE, an anti-insurrectionist operation in the 14 Herculis System. Though the operation started out well, things took several turns for the worse and resulted in the team's destruction, except for Rachel who was saved at the last minute. Following the incident, she completed the operation on her own by wiping out the last rebels in 14 Herculis, earning her a promotion to Petty Officer First Class, but she was also temporarily discharged to undergo therapy against Post-Traumatic Stress Disorder after the loss of her teammates.

Following the treatment, she was reassigned to another division of the Delta-4 Division – becoming a Class III equivalent of the Class I Leonidan Operatives. At this time, her identity was changed to 'Rachel Hawke' to maintain secrecy. She then undertook several solo missions, including operations HEARTSEEKER – a foray into Covenant-controlled territory to weaken their war machine – and BROKEN CHAIN – a mission to weaken the Covenant forces in the Eden Asteroid Belt – both of which were successful.

Her life as an ONI operative was ended in mid-2549, shortly after testing and receiving the latest iteration of the Hayabusa Powered Assault Armor for RKD, when she found herself moved into Naval Special Warfare's chain of command, as an addition to the special operations contingent of Battlegroup Walpurgis Night. With her new unit, she saw action on New Beijing and Paris IV, fighting with distinction.

She would continue to fight in this assignment – interrupted only once to test and receive a Mark V(A) MJOLNIR Armor and to act as a fill-in for a wounded member of Noble Team for the duration of Operation: SWEEPING STRIKE afterwards – until, immediately after her assignment with Noble, she was attached as a member of INDIGO-II "Winter Team" - a mix-match Spartan reserves unit of the HEADHUNTER Project, made up of survivors like herself. Though teamworking difficulties arose to begin with, she ended up getting well along with the team over time, fighting with them until the end of the Human-Covenant War in 2553.

After the end of the Great War, Rachel was reunited with Laszlo-108 and accompanied him on Operation: SAVIOUR – a mission commissioned by Lord Hood to search for John-117. The search was in the end fruitless and the operation was called off in 2596. Rachel continued to accompany Laszlo, joining him and the other surviving Spartans in training the candidates of the new SPARTAN-IV Program, eventually assuming the role of executive officer of Albion Company. 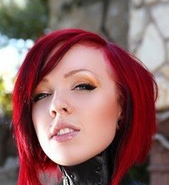 Rachel out of armor.

Rachel in her SPI armor. 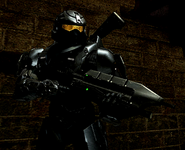 Add a photo to this gallery

Retrieved from "https://halofanon.fandom.com/wiki/Rachel-343?oldid=681454"
Community content is available under CC-BY-SA unless otherwise noted.