The suit is a single piece, with a protective and thermal regulating pressure suit, its delicate balance maintained by the life support kit. It has bulky and well protected, with constant volume joints. It features a domed wide vision EVA helmet with holographic HUD interface and variable visor tinting, gold tinting, to phase out solar radiation and black tinting to hide the face of the user. The domed visor carries an external infra-red camera and a HUD uplink to this. The domed visor can be replaced by a sealed helmet for added protection. Despite the bulk it is comfortable to use. This is because of the need to decompress the user in hard vacuum and low pressure, to stop the suit rapidly inflating and the bulky life support system needed to maintain the pressure. The inside layer of the suit is a thermal regulating layer, connected to the life support system, keeping the suit warm or cool enough to protect the user. Sandwiched between the inner and outer layer is a radiation protective layer to protect the user.

For varying atmospheres it's compact life support system can take alternating gas compositions. For normal pressures it uses normal air mixtures, for high pressure environments it uses 2% oxygen with helium and nitrogen and 100% oxygen for lower pressures. It has a kevlar weave to give it some resistance to small calibre gunfire and micro meteorites. Because the suit is worn so tight, normal BDUs and body armour can be worn over the suit.

The Pressure suit is mostly worn by Marines who are going to operate in areas where they may be exposed to a vacuum, servicemen preforming high orbit insertions or infantry preforming drop pod assaults, most notable Orbital Drop Shock Troopers. 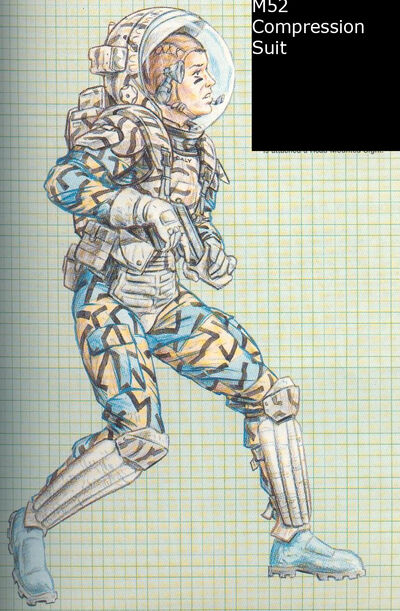 Retrieved from "https://halofanon.fandom.com/wiki/M37_Pressure_Suit?oldid=416603"
Community content is available under CC-BY-SA unless otherwise noted.