The Kreigor-Jastenon Super Heavy Support Tank-1, also known as the Anvil is a joint Kriegor-Jastenon clan project design to create a large, powerful armored support vehicle capable of filling a variety of roles.

The Anvil looks like many Machina tanks, with a rectangular lower body, a large rectangular turret, and one of three massive guns. The vehicle has a large, powerful engine to power the massive set of treads. The vehicle has modular weapons stations on the top hatches, the main gun, two side mounted sponsons, and two turrets on top of the sponsons.

The first Anvil was created a by a set of Jastenon Engineers refitting a Colossus Tank with their own energy cannons, in a effort to one up thier long standing rivals, the Fondera. However, Kreigor, who created the vehicle's chassis and hull were interested in the idea and entertained it.

The Vehicle has the already sizeable powerplant of the Colossus enlarged, requiring the chassis to be enlarged to accomodate the area that was once the turret, creating a higher super structure. From here they emplanted the gun in a fixed position.

(For more detail on weapons, see variant descriptions below) 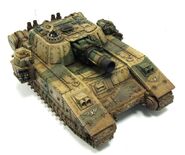 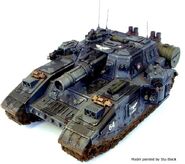 The Anvil AHWV. Note the Battlefield Observation System in place of a sponson-top turrets. ‎
Community content is available under CC-BY-SA unless otherwise noted.