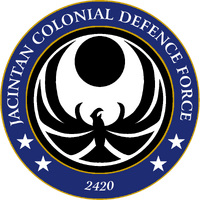 The Jacintan Colonial Defence Force, founded in 2420, during an era of economic prosperity by the colonial government of Jacinto, to protect its people and to ensure that the colony's economic might cannot be threatened by any foreign or domestic foe. For most colonies, their defense forces were organized by the Colonial Administration Authority and Colonial Military Administration until they were absorbed by the United Nations Space Command in 2525. Thanks to Jacinto's economic strength that flourished in the 25th Century, the Commonwealth of Jacinto was granted the rights to establish their own independent Colonial Militia. Despite initial push back from the CAA, CMA and even the UNSC, Jacinto was granted special privileges by the Unified Earth Government to establish it's own military force in 2420, however the Commonwealth was forced to concede to a permanent UNSC military presence, which on paper was stated that it was to train and assist the newly founded JCDF, and to ensure stability and cooperation. In reality, it was to be a deterrent against future secessionist movements from developing within the JCDF's general staff.

Before the Siege of Jacinto, the JCDF's active-duty personnel numbered around 650,000 in July 2551, with an additional 200,000 in reserve. As the war against the Covenant continued to deteriorate, the colonial government issued a limited conscription policy to raise the total number of active-duty personnel to 1,500,000 by the end of the year. At the conclusion of the siege, the number of JCDF personnel that had served peaked at 22,400,000 personnel, followed by millions of civilians who volunteered in militia and guerrilla fighting groups aided by the JCDF. The JCDF demobilized significantly in 2555, with only 1,200,000 active-duty personnel and 500,000 in reserve, with plans to cut additional funding and personnel over the next five years.

Headquartered in the capital city of Cedros, the JCDF Armed Forces are organized under the High Command, which is operated by the Colonial Ministry of Defense (MD). The components that form the JCDF High Command (JCOM) are the Ground Forces (JCGF), Air Force (JCAF), Navy (JCDN), and the Maritime Forces (JCMF). Three months into the siege, Admiral Veronica Garcia was appointed to be the Supreme Commander of the Defense Forces, putting her in charge of all JCDF-led theaters of war and operations for the duration of the battle.

In the 26th Century, the JCDF Navy underwent a major overhaul, buying older models of UNSC frigates and destroyers to replace older vessels. By 2550, the Navy had acquired several Paris-class heavy frigates, Stalwart-class light frigates, and Halberd-class destroyers numbering a total of forty combat-ready warships, along with an additional request for a Halcyon-class light cruiser, though it was ignored as the UNSC needed every available vessel for their defense of the Inner Colonies.

Retrieved from "https://halofanon.fandom.com/wiki/Jacintan_Colonial_Defence_Force?oldid=714236"
Community content is available under CC-BY-SA unless otherwise noted.