"Multiple human bombers, they just hit our dry dock, primary fuel reserves are on fire! How did they get here, without carriers?"
―Brute Naval Officer

The I-660 Spear is the UNSC's long range Interdictor. It is a Navy modified variant of the B-659 Scimitar, with several changes to allow it to operate from a carrier. The craft is primarily designed to carrying large amounts of ordnance over long ranges to be deployed against enemy forces. The craft is slip space capable so it can make short jaunts across close systems, allowing it to operate from a launch position in friendly or neutral space and launch a bombing run and return safely. It is supported by this by being capable of both defending itself from enemy fighters and survive enemy CIWS defences and AAA Systems to deliver devastating payloads, carrying 50% more ordnance than that of the smaller I-550 Broadsword. The Spear, despite its size, is surprisingly fast, though not agile, meaning it can keep up with vessels such as the broadsword in bombing runs and deliver heavy fire. To defend itself, it mounts three remote weapon stations, using twin linked rail guns and a quad railgun on the rear turret. One is mounted on the tail, on the back of the flight cabin and one under the cabin and the RADAR. These defensive guns have their own tracking RADAR, LIDAR, optical sensor, infra-red sensor and magnetic array.

The Spear carries six bomb bays, in two rows of three, allowing it to carry an ungodly amount of munition. It can carry carry 144 small diameter bombs, 48 1000lb bombs, 36 2000lb bombs, a number of cruise missiles or even a pair of high yield bombs, or large cruise missiles. It can alternately be fitted with rotary launch bays, that restrict the amount of ordnance it can launch at once, but allow it to carry more ordnance, with greater variety. It can fit four external heavy pylons, that allow it to significantly increase its ordnance payload at the cost of stealth, giving it the option to carry more bombs, missiles or nuclear warheads externally. These external pylons can also mount FQ-99C Scimitar Unmanned Combat Aerial Vehicles for close in defence against interceptors, or MQ-90 Bayonets for forward suppression of enemy air defences, reconnaissance or battle damage assessment. It also mounts a pair of medium pylons on either side of the fuselage, for defensive missiles against ground and air targets.

The I/B-660 Glaive's airframe is constructed from a basis of superplastic-shaped diffusion-adhered metal matrix composites. These light, oxidation resistant light-matrix composites are formed from high modulus and high strength gold doped zirconium oxide fibres and a titanium/aluminium laminate matrix, formed by heat bonding layers of titanium, aluminium and titanium aluminide, forming high strength crystal matrices, the results forming a high strength, yet flexible and light airframe. The skin is formed from four layered plates attached to the frame. The inside layer is a high strength carbon nanotube nanobud mesh composite, which does not melt on re-entry and protects the ship and occupants. Above this is a environmental layer, which regulates internal and external heat, preventing layers from outright melting or freezing, and protecting the occupants. The third layer is a resin bonded layer of structural titanium aluminide with a titanium mesh insert. The fourth layer is a outer layer of AEGIS tiles, built on a non-newtonian shock absorbing layer, providing thermal and oxidation protection. The cockpit is situated in titanium-AEGIS compound armoured 'tubs'. These give limited protection against enemy fire. The windscreen is bullet-proof diffusion-bonded self-regenerating stretched-acrylic, with a coating of liquid glass, with a variable electronically controlled gold tinted setting, which protects it from solar rays, laser dazzles and electronic interference. These give limited protection against enemy fire. The skin is painted with thermal diffusing paint, heat controlled hull to generate a black body exterior, infra-red suppressors on the engines, RADAR absorbent paint, liquid glass composites and LASER absorbent laminates, which when compounded with its stealth design, gives it excellent stealth abilities.

The Spear, due to its size requires either a run way or capturing equipment to return to its carrier. It is fitted with two large, extremely powerful engines, featuring mutli-axis thrust vectoring, divertless engine inserts, triple redundant flight systems, and variable sweep wings, allowing it to fit inside smaller spaces of warship interiors and expand the wings at launch to allow greater manoeuvrability and lift. The twin wing tails also fold in to allow decreased room.

The Electronic Warfare systems consists of two pods, the AN/ALQ-57 VANGUARD jamming system, capable of intercepting and deciphering radio systems, intercepting RADAR transmissions and intercepting MASER transmissions and then tracking the source and jamming it through low detectable directed narrow ban jamming or wide area jamming, at the cost of stealth. It has the added functionality of being able to feed false information to any of the above sensor or communication systems, further confusing enemy forces or preform active cancellation, sending out directed, well timed signals on the correct wavelength to 'cancel' enemy RADAR, Radio or MASER signatures, resulting in a 'silence'. The second pod is a Electronic Protection Pod, the AN/ALQ-61 PACK RAT that interferes with enemy attempts to intercept and jam communication and detection systems by producing narrow beam 'burn outs' that confuse and jam enemy attempts to jam them. Along with that, it uses a CPU driven decryption system that protects against attempts to intercept communication systems or preform cyber warfare attacks, usually through vicious back hacks and maze barrier systems. Its tail assembly has been modified with lightweight and low impact signals receiver and directional finder.

"During the Kasiim siege The UNSC Zeus kept sending in Spears in from the edge of the system, at the fleet rendevous. Kept us going for a while. Carpet bombed the whole entire area outside our defence points, slowed down their advances thankfully."

"We were on a solo patrol on the Mannheim line, just me, the Black Guard and rest of the my Katana Squadron. We got hammered by two Necros Destroyers on recon, left us on the run and two of my boys dead. We drop a distress call, five minutes later a squadron of these ladies jump from Mannheim Fleet Base and blow holes in their armour and escorted us back to the jump to Mannheim."

"The Ambush at Sector 2-01 was constantly supported by these, being sent in floods from a super carrier the system over. Kept the momentum really going, even crippled their super carrier." 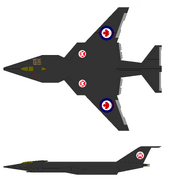 The I-660 piloted by Ross East Jr.
Add a photo to this gallery
Retrieved from "https://halofanon.fandom.com/wiki/I/B-660_Glaive?oldid=685787"
Community content is available under CC-BY-SA unless otherwise noted.