The Human-Covenant War, also known as the Great War, was a major interstellar conflict that occurred between February 11, 2525, and March 3, 2552, and saw a state of total war exist between the Unified Earth Government and the Covenant Empire. The war took place in the Orion Arm of the Milky Way galaxy, the location of both the main belligerents' territories, and also involved The Flood and automated remnants of the Forerunner Empire, both within the Orion arm and across the wider galaxy. A single engagement, the Battle of The Ark, took place beyond the galactic disc itself, and is widely regarded by historians as one of the most decisive battles of the war.

The war was instigated by the Covenant, whose High Prophets discovered that humans were directly descended from the Forerunners, a hyper-advanced extinct species whom the Covenant venerated. In order to keep the Covenant intact, war was declared against humanity, and over the next decades the Covenant repeatedly defeated humanity across hundreds of colony worlds, slowly moving closer to Earth itself and leaving only dead worlds in its path. The Covenant, with superior technology, numbers and firepower, dealt humanity heavy blows at nearly every encounter, including those at heavily defended strongholds such as Reach and New Carthage. The UEG could only achieve scattered victories, almost always at a heavy cost.

The conflict was closely connected with, and the short term cause of, the Great Schism, in which the entirety of the Sangheili race split from the Covenant after the usurpation of their power by the Jiralhanae, at the command of the Prophet of Truth. The Covenant Separatists, comprised of Sangheili, Unggoy and Lekgolo defectors, allied themselves with the severely weakened UEG, forming an uneasy alliance based on necessity and a mutual foe in the Covenant. This alliance was key to the factions' combined victory.

The war was unofficially ended in December 2552, with Separatist and UNSC forces dealing a final, crippling blow to the Covenant during Operation: BLIND FAITH; destroying its leadership, preventing the Halo Array from being fired and eradicating the Flood. The official end of hostilities came on March 3, 2553, when the Covenant Separatists and the UNSC signed the Interim Coalition Agreement aboard UNSC Aegis Fate. This declaration was signed under the idea that the Separatists were the legitimate successors to the Covenant Empire, and in lieu of such a declaration from the Covenant Loyalists, who remained in total disarray. The war, the most deadly and damaging in the modern histories of both Humanity and the Covenant, cost the lives of nearly twenty five billion sentient beings, with a staggering twenty three billion of these being Human deaths.

"We will root out every single world you possess and lay waste to them one by one until there’s nowhere left for you to go."
―Subject 386 details the true extent of the threat Humanity faces 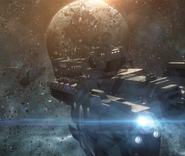 Add a photo to this gallery
Retrieved from "https://halofanon.fandom.com/wiki/Human-Covenant_War_(StoneGhost)?oldid=665675"
Community content is available under CC-BY-SA unless otherwise noted.