Halo Fanon
Register
Don't have an account?
Sign In
in: Colonial Conflicts, Zenith of the Dismantled, Sev40,
and 7 more

"You call her the grandmother of the fleet. And yet, even after seventy years, you can't name a more powerful escort. I think she has done something right, don't you?"
―Captain Patrick "Doc" Irwin, on the CMA Falkirian Prince.

The Hillsborough-class light destroyer (hull classification symbol: DDG/DD[1]) was a line of heavy escort ships pressed into a command role. The largest, most advanced and above all most powerful ship of its classification fielded by the Colonial Military Administration at the time of its introduction, the durable Hillsborough-class represented the pinnacle of their military might. It was envisioned as the perfect assault ship, working in groups to use their combined weapons to overpower any single opponent to obtain orbit. Once secured, it can act as an resupply barge for ground troops, and use its remaining armaments to lay waste to cities and even small continents. Their only failing at the time laid with their low troop complement and inefficient reactors, which culminated in a restricted range and limited their use only to surgical strikes.

Forged during the fires of the Inner Colony Wars, the Hillsborough-class heavy destroyer was originally restricted to missions of utmost importance, wiping out the interstellar power of the rebels and in groups locking down their worlds. Poorly-suited to the role of workhorse frigate, the CMA instead modified them into destroyer leaders, using them to coordinate the efforts of entire patrol groups. Eventually losing their prestigious state to younger and younger ships, the Hillsborough-class would be pressed into more and more mundane roles, such as trade line patrol, frontier investigations, and even ammunition ships in some cases. Indeed, by the turn of the twenty-sixth century, the ship that was once crowned a cruiser-killer and stalled the UNSC's encroachment into their domain was being left in mothyards and at risk of being scrapped altogether. Undergoing a major refit in 2507 to meet modern threats, these destroyers would fight on both sides of the Insurrection, either being stolen, salvaged, or even donated to separatist sympathisers.

It was a Hillsborough-class heavy destroyer that would lead an investigation into the loss of communications with Harvest, and became one of the first human ships to engage the Covenant. Quickly discovered as being horrendously ineffective against the new alien menace, they were slaughtered in the early months of the Human-Covenant War. Outside of isolated incidents such as being used as fireships, by 2527 all Hillsborough-class destroyers were in the process of being sold off or scrapped. The UNSC ceased to use any more of these ships after 2535, although many examples would survive in Insurrectionist cells planetary defence fleets. Even by 2558, there were still sightings of the class, albeit in fewer and fewer numbers. 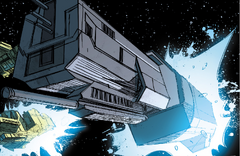