"Their mortars rained over the mountains - along a route known for its narrowness. Everything - tanks, bunkers, even damn corvette - was either destroyed or burning."
―Cpl. Zac Wegner

The Haruvr-pattern aerial artillery, designated by the United Nations Space Command as the Type-33 bombardment platform and colloquially known as the Hydra, is a rarely-seen ground-attack aircraft that is deployed by the Covenant hegemony. Designed to pound at reinforced, subterranean structures and conduct widespread crowd clearing, the Hydra became one of the rarer but nevertheless most feared assets in the Covenant's impressive vehicle arsenal. Heavily armed with multiple plasma mortars, they have inferior armour and require escort during policing campaigns.

The first Hydras were introduced in response to the Unggoy Rebellion, being retrofitted from a line of small mining ships to act as a desperate siege vehicle. Only making an impact on the very last battles of the conflicts, they would only be deployed sparingly in insurgencies too large to be contained by regular troops but not so large as to demand the fleet's attention. Unfortunately, the stigma against them thanks to their ineffectiveness in direct battle ensured that they never saw mass production and remained a limited sight in both the Jiralhanae-Covenant and the Human-Covenant Wars.

"We've lost contact with three tank battalions in that area over the past week. A combined fighter and search-and-rescue squad has been sent in... But if I'm going to be honest, sir: survivors are unlikely."
―Lt. César, in a combat report during the Siege of Chi Rho.

The Hydra is designed first and foremost as an artillery unit which can set itself up in any environment to whittle down an enemy advance, where ground-based Wraith tanks are unable to reliably provide long-range fire support. As their pilots preferred places to deploy - near rocky, undeveloped, and isolated areas - prevents vehicles and most types of infantry from engaging them directly, they do not need to worry about having to fend off a counterattack. Their high rate-of-fire is capable of inflicting devastating damage against entire armies, with their semi-inaccurate fire forcing troops and light vehicles into cover, stopping them from moving quickly. Tanks have no such recourse and are reduced to lifeless husks within a minute of bombardment. This removal of a larger force's ability to move, and the elimination most of their heavy weapons, leaves them vulnerable to the wave of Covenant soldiers which arrive soon after. Their ability to attack without directly exposing themselves was an incredible boon that helped Covenant soldiers regroup while the defenders were distracted.

However, the terrifying nature of their armaments and the Jiralhanae's disgust towards such cowardly actions means that hydras have been sighted in more conventional theatres. Supported by escorting Farrital-pattern Banshees, they would be retooled as ground-attack gunships, devastating reinforced fortifications and armour, and scattering infantry and light vehicles. Firebases and similar prefabricated fortresses were found to be particularly vulnerable, and reports of a Hydra being sighted nearby were usually followed by them being reduced to smoldering ruins within minutes. They found a good synergy with banshees and ghosts; while the Hydras focused on the tanks and heavy turrets, the lighter attack craft could easily root out infantry attempting to exploit its belly blind-spot. In space, Hydra squadrons occupy a heavy bomber role against larger warships, as their heavy weapons make short work of Titanium-A. Their range and precision, especially when gravity is not a serious factor within a vacuum, allows them to hit vulnerable sections on capital ships, such as their bridge, hangars, and communications arrays.

Despite the power of their weapons, Hydras are rarely-deployed because their design has proven to be particularly ripe for exploitation. Their only weapon systems are mounted on top of the aircraft, and are easily obscured from traversing below 20o downwards and beyond 80o upwards along most directions, ensuring that opponents within these wide windows are safe from the aircraft. The plasma mortars travel too slowly to be a real threat to other airborne aircraft, and it takes a particularly-skilled gunner to land a hit on lighter VTOLs. In addition, while their belly armour segments were some of the thickest on the aircraft, it is still comparatively light when compared to other dropships and could be easily broken with infantry anti-air missiles. As a result, experienced Hydra pilots learn to fly low and open their cooling vents in order to dissuade infantry, despite their vulnerability to hijacking.

Even after conversions from their civilian predecessors, Hydras are widely-known for their slow speed and agility. Easy to outflank, they travel in predictable routes and their underpowered engines makes it difficult for their pilots to avoid incoming fire. While M9 Wolverine Main Anti-Aircraft Tanks are the preferred counters, even unguided rockets from M41 SPNKRs are capable of hitting them if used close enough, especially if the operator predicts the aircraft's evasive movement.

The Kantu-pattern gunship is a cheaper, more conventional modification of the vehicle it spawned from, sacrificing its extreme range in favour of a modular cargo bay on one side and a cramped troop bay on the other. Despite these changes attempting to increase its versatility, it failed to compete with phantoms and remained particularly obscure.

The Kantu is designed for close-in air support, incinerating and flattening everything around it before deploying its ground lance. This justifies its strengthened keel shields, and its upgrade of three repulsor drives to offer a notable improvement to speed. 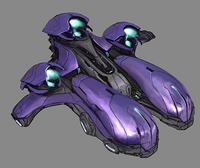 Various views of the Haruvr-pattern.

Add a photo to this gallery
Retrieved from "https://halofanon.fandom.com/wiki/Haruvr-pattern_aerial_artillery?oldid=715821"
Community content is available under CC-BY-SA unless otherwise noted.