"In the beginning the Universe was created.
This has made a lot of people very angry and been widely regarded as a bad move."
―Douglas Adams, The Restaurant at the End of the Universe

Fans realize something Microsoft does not, that robust decade-old multi-million-dollar franchises, while seemingly healthy, are in actuality as fragile as two bricks tied together with tissue paper. One mistake, one bad misstep will cause the entire thing to shatter and fall apart; and Halo would be ruined forever.

Some Halo conservationists suggest a more extreme approach, that Halo should abandon all attempts at re-invention and instead cater exclusively to the old-school fanbase. Though attractive, this approach may prove impractical as a long-term solution.

Ruined Forever remains a serious threat to Halo now and in the foreseeable future, though it's possible a proposed initiative requiring all Halo fans to purchase an annual "online offset" could ensure our fragile brand's existence through the mid-21st century.

Things that have Ruined Halo Forever in the past 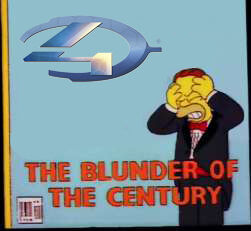 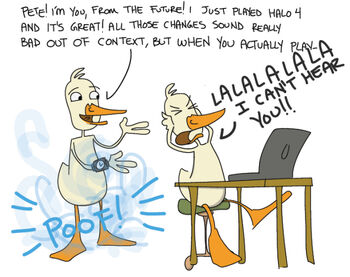 And I for one welcome our new Guardian overlords.

"I'm pretty sure when you look up "reading way too much into things" in the dictionary, it just links to this thread.
We should have much more about the project in CF this week, but suffice to say, i feel like we've reached a fun balance of letting players role play as an awesome Sangheili warrior in a super cool fighting game scenario/universe, including giving them the option to have that character appear as the Arbiter they know and love.
Complaining about and dissecting marketing intent, voice acting, and naming conventions are completely missing the proverbial point, and just comes off sounding like unsatisfyible bitching for bitchings sake.
Still love you guys though. Mostly."
―<3 GrimBrother One

March: Halo: Point of Light is released and is critically acclaimed as the best Halo book to enter into the franchise.

Things that will no doubt Ruin Halo Forever in the future

This page is based on the Transformers Wiki article "Ruined FOREVER", which is licensed under the GFDL.