"They tell me that all things have a beginning. The greatest warrior must first start as a humble child. A star forms out of a cloud of dust left by the death throes of its parent. And even this universe had a beginning, though we cannot see it and its mysteries shall be taken to its grave with us all.
Even my tale has a beginning.
I wonder if you will know of it? Perhaps not. Few do, and fewer still care. But once, it was my beginning.
They tell me that all things repeat. Perhaps, I say, but it is not the results that matter. It is the methods.
And so, I will tell you a story of loss and betrayal. Of hope and despair. Or destruction and rebirth.
I will tell you my tale."
―Qur'a 'Morhek 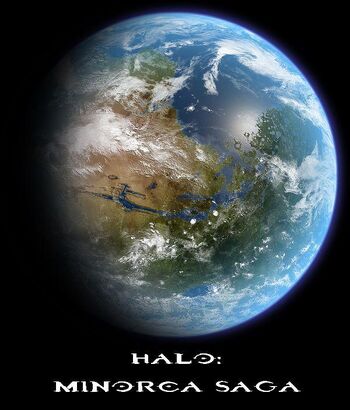 The year is 2551, and Humanity for the past twenty-seven years has been battling a technologically and numerically superior enemy, called the Covenant. Religiously deluded, they have been waging a war of absolute extermination against the inferior Humans, and they will not rest until there is no trace of the “human pestilence” in the Milky Way.

However, the UNSC has numerous special projects underway, all of which are aimed at turning the course of the war. NOVA and TEMERITY are the names of these highly destructive and audacious projects, all conducted by the Office of Naval Intelligence, the UNSC’s intelligence gathering, black operations, and special research division, made up of the best and brightest the UNSC has to offer. One of those highly clever and sharp persons is Michael Pomare, a daring Lieutenant Commander with a highly analytical mind. After examining Covenant communications and transmissions, he has determined the Covenant’s next target: Minorca. Located in the Alpha Canis Minoris system, Minorca was known for its high rates of rebel activity, and as the Covenant closed in, numerous colonists had fled the planet for the Inner Colonies.

At the same time, a mysterious artefact is discovered that threatens to tear the Covenant apart. Sinister conspiracies, betrayals and secrets threaten to tear the Covenant apart, and it lies on the Sangheili and Jiralhanae to hold it together. But can they ignore their centuries-old feud long enough to survive the human ambush? The artifact lies beneath Minorca, holding vital clues to the nature of the Great Journey, and the Prophets will uncover its secrets...no matter what cost. And one way or another, a Journey shall commence! But there are guards, intent on stopping all harm from coming to the "Labyrinth". And the artifact isn't all they guard...

Now, searching for an artifact left by an ancient and enigmatic race, the might of the Covenant is now racing for Minorca, and a hopeful UNSC fleet is standing in their way. But some of their soldiers are members of the elite SPARTAN-II unit, who are soon becoming Humanity’s last hope for survival. Will the “craziest operation ever devised” succeed and bear fruit, or will it fail, leading the Covenant even closer to Earth? This is the story of those who fought on that beautiful doomed world...

Retrieved from "https://halofanon.fandom.com/wiki/Halo:_Minorca_Saga?oldid=672097"
Community content is available under CC-BY-SA unless otherwise noted.