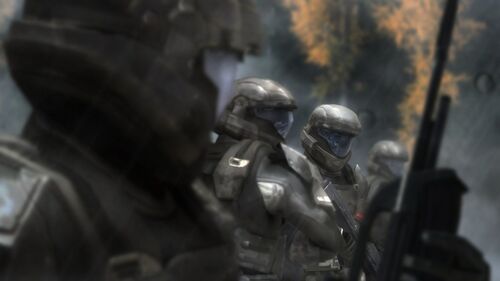 "Shame on us, doomed from the start; may God have mercy on our dirty little hearts. Shame on us and that we've done and all we ever were, just zeroes and ones."

It is 2609, more than half a century since the end of the Great War. Humanity is well into the long road to recovery, assisted in their efforts by their new allies, the noble Sangheili. Together, the two species have set about pacifying and liberating the remaining Covenant Remnants, defeating the occasional Brute warlord or upstart Prophet. These conflicts have begun dying down as new Forerunner technologies, discovered by joint UNSC/USR scientific expeditions, are applied to the armed forces of those factions. Sangheilian military discipline and Human scientific research methods have crossed sides, allowing for the mutual advancement of both races. Xenophobia is still something of a problem, but with more and more organizations being formed to promote inter-species tolerance and awareness. Things are looking up, and peace seems to be the watchword of the day.

Unfortunately, this is not to be. Back on the home front, humanity's United Earth Government has found itself overstretched, trying too hard to expand and reclaim its once-prominent frontier, as well as claim new worlds for its increasing population. Funds are tight, and belts are tighter. It is with this in mind that the government begins to retract funding from one of its most financially-draining projects, veteran support. Upon completion of service, all veterans and survivors of veterans of the Great War were granted two choices: a large tract of land and a prefab house on a new colony, or a monthly stipend to be paid until their twilight years. Surprisingly many of the vets took the land and the chance to start anew, away from their terrible memories of the past. But there were a significant amount that chose the stipend. Now, with the government requiring funds to both grow its defense force and accelerate its colonialism, these veterans have been put on "rolling allotments," whereby their payments are skipped every other year. Resentment against the administration has grown because of this decision, and formerly loyal colonies have turned more and more to thoughts of Insurrection. Nowhere has this sentiment been stronger than the planet of Baikal II, a small, frigid and rainy world in the Outer Colonies. Neo-Insurrectionists-- or as they style themselves, the "New Resistance Front"-- led by Garrett Elmsworth, propagate anti-government feelings and spread xenophobia amongst the restless population. With perhaps the worst timing possible, Kig Yar raiders have temporarily cut supply lines to the planet.

Now, huge and angry riots rage across the major population centers, focused primarily on the UNSCDF garrison in the city of Maerska, Arkangelsk District. HIGHCOM, now significantly worried, has quietly dispatched a unit of ODSTs-- the 105th's 10th Shock Troops Special Operations Company, to the planet to assist, officially, in "quelling the riots" and "providing security for humanitarian aid group officials." Their true purpose however, is to eliminate New Resistance leaders and supply caches across the planet. ONI believes that such actions will soon cause the riots to stop, and eliminate the nasty business of a second rebellion movement. How the mission will proceed, however, remains to be seen...

Garrett Elmsworth sat back in his newly-liberated faux-leather swivel chair, propping his feet up on the worn out door that served as his makeshift desk. Fumbling around in his pocket, he withdrew a chrome lighter, engraved with the insignia of some UNSC Special Ops unit. He couldn't really remember which one it was, but the operator had been captured and interrogated by his crew. He thumbed the light scar across the face of the lighter disappointedly. Those hooligans were supposed to have swept the man for valuables, and had missed this when the question and answer session turned violent. At least the blood had mostly cleared off by now. It had crusted in the scratch, however, and wouldn't come out no matter how hard Elmsworth tried to coax it.

He flicked the cover, sparked the lighter and watched the flame gleam for a minute before re-lighting the damp hand-rolled CompH blunt in the corner of his mouth. Inhaling, he allowed the smoke to pool in his mouth, savoring the odd fruity-nutty aroma and feeling his senses sharpen. Puckering his lips, he blew several smoke rings before snatching the remote off his desk and activating the old-school flat display on the wall. The newscaster, a highly-attractive blonde woman-- or AI? Elmsworth wondered-- seemed decidedly serious today as she relayed to her viewers in a concerned tone the important events of the day.

"Food riots have broken out as Remnant forces staged a desperate raid on the relief freighters inbound to our sector today. Hundreds of tonnes of desperately-needed supplies and aid have been either pilfered or destroyed in the attack, and UNSC forces have been dispatched to the area to provide extra security for the remainder of the convoy, and to eliminate the Remnant ships operating nearby. Colonial Authority representatives promised that they would do everything they could to relieve the suffering here, but so far the population remains skeptical."

The picture cut to a stocky man of Slavic descent with an angry expression on his face. Behind him, rioters surged against the shield wall of the local constabulary, throwing rocks and pieces of prefab shelters. Elmsworth cut the sound and just watched the man's face, reading him. Anger behind those eyes. Anger at betrayal. Anger at the bureaucracy, at the Man, at the Colonial Authority officials who certainly dined far better than he ever would tonight. He looked ripe for a little suggestion, balanced right on the knife's edge of dissent and rebellion, easily swayed. Or pushed, Elmsworth thought, chuckling to himself under his smoke-laden breath. Slowly, he dragged his feet off of his desk and stood up. Striding to the door, he flicked the wall display off, picked up the old MA5B he had left in the corner and snatched the voice-amplifier from its hook on the wall. Things were going to get interesting tonight.

"Mei!" he yelled, his voice echoing off the dingy plasticized framework of the old rowhouse. "Get the boys and girls mobilized and let's go! We got a good situation to exploit here!"

The dropship ride down to the planet's surface was both unremarkable and boring. The same stresses of gravity, the same heat of re-entry, the same nervous energy, the same stuffy atmosphere that reeked of sweat and aggression. Lee Deacon sat across the bay from his assistant squad leader, Madison Carson, checking his armor for the umpteenth time this trip. The nicks and dents on the plates were all just memories to him, their positions personalizing his armor in a far more terrifying way than any paint or patch could accomplish. He rotated his helmet in his hands-- the helmet that should have technically been on his head, just in case of hull rupture-- and looked it over. The regulation cobalt trim had chipped and faded into a jagged half-stripe on the top, though the small rectangle of white tiger just above the visor had maintained its original appearance. Hand-stenciled on the side of his helmet was the sword and Templar cross, painted there once he had earned his callsign, Apostle. His squadmates had thought themselves oh so funny when they had awarded the nick name to him, punning off of his last name. He rolled his eyes and looked over to Madison.

She was busily fiddling away at a handheld gaming system, her gear checked and double-checked, her helmet popped and lolling haphazardly in her lap. She slouched against the cushions of the crash seat, an expression of intense concentration on her face. Apostle grinned, shaking his head at her disregard for standard regulations. Quickly, he did a rundown of the Pelican's troop compartment, making sure that his squad was squared away and ready to go. "Longshot" Vincze sat off in the far corner of the bay, apparently lost in his own thoughts, while "Killer," helmet on, played with the evil-looking new combat knife he had requisitioned from supply. The new member of the squad, "Freshmeat" Matthews, was currently having his ear advised off by "Diablo" Elliot, while "Angel" Söröss looked on, quietly amused. "Tiger," "Boomer," and "Splash" all clumped together on the same row playing rock, paper, scissors, while "Yahtzee" listened to some sort of atrocious neo-colonial zip music on his helmet speakers. The two Team Commanders, "Lotus" and "Slate," sat in the auxiliary seats of the cockpit, where they could see everything that was going on. Everyone looked in pretty fair condition, like they were ready for anything. Which was good, because that meant morale was high. And with a mission as dull and uninteresting as the one they had been briefed on before their departure from the UNSC Ain't No Sunshine, every bit of positive attitude would help.

The intercom sputtered. "Get ready, boys and girls, gonna speed up our re-entry time. Hang on to something..." Nearly immediately after the pilot had finished this sentence, the dropship lurched downwards abruptly, nosediving for the surface and drawing loud protests from the troopers in the bay.

"What the hell, man?" Tiger whined, pulling the restraints tightly around his armored torso.

"Yeah, really, right?" Boomer rejoined, "Who does he think he is? Some SpecOps peli-jock? Come on, manos, no need to try and impress the big bad Helljumpers..."

"Stow it," Killer growled, sheathing his combat knife. The crimson hash marks on his armor's gauntlets and pauldrons, defining his kill count, had spread across to his chest plate and earned him quite a bit of wary respect from his recent team mates. So, when he told people to shut up, they listened. No matter how small he was, he made up for it with sheer intimidation.

"Coming in hot, kicking the thrusters," the pilot reported, accompanied by the reassuring blast of the bird's four heavy engines. "Get ready to disembark, and make sure you don't leave your shit on my blood tray, 'cos I sure as hell ain't coming back any time soon."