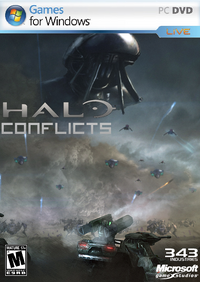 Halo Conflicts is a massively multiplayer online game developed by Unknown Game Studios and published by Microsoft Game Studios for Microsoft Windows. The game revolves around the conflicts of the Halo Universe, and brings together all the elements from the Halo fiction.

Announced at the 2011 Electronic Entertainment Expo in Los Angeles, Halo Conflicts was the second Halo MMO announced to the public, the first being Halo Titan however Titan was ended when Ensemble was to focus on the Halo RTS Halo Wars.

The emphasis of Halo Conflicts revolves around a galactic war between the United Nations Space Command and the Covenant Empire, both of which players can align with in game. It is suited for a wide range of gameplay styles, players can specialize in a certain combat role or even take part in behind the scenes action with command and logistics. However, the primary focus of the game is in combat, in all forms. It is the first Halo game to allow players full control over every vehicle, aircraft, and starship.

Halo:Conflicts is similar to the games of the original trilogy, however Conflicts transforms the Halo series into a massive, expansive world where at one moment the Covenant could have just glassed a UNSC military base, to the UNSC discovering an ancient and powerful Forerunner weapon. The game has no limitations on where the player can venture to, with the right equipment. However, the game does have a specific goal for the factions, the Covenant Empire's primary goal is the extermination of humanity through force, and the UNSC's goal is to defend itself in any way possible.

When first starting Halo:Conflicts, you have to create an account. The account will keep track of your characters and progress. Halo:Conflicts is a free to play game, much like Guild Wars. One account key can be used per account. After creating your account you are free to create characters, a maximum of four characters per account however up to eight extra character slots can be purchased for $.99 USD from the Conflicts store.

After creating your account, you have to create your characters, the first screen will show you the factions, which include the United Nations Space Command and the Covenant Empire. After choosing your faction, you must choose a service. A service is a specific organization within the original faction, such as ONI, UNSC Navy, Marine Corp, Air Force, and Army within the United Nations Space Command. A service will grant you special classes, skills, and starting boosts for your character. For the Covenant, the player selects their service, either Army or Navy, and then their race, which will also effect their skills and abilities.

After choosing your faction who your character will fight, the next is to customize your character. The character customization screen is similar to the system used by Bethesda Studios in their games Fallout 3 and The Elder Scrolls IV. After customizing your character, you are ready for basic training.

Basic Training is the primary way of entering Halo:Conflicts. This will get you in touch with the controls, and basic concepts of the game. This can be skipped if a second character is made. Basic Training involves courses to determine which class the system will preselect for you, although you can change this prior to entering the game world. Various courses will test your selection, including firing ranges, military knowledge, and basic questions. After completing basic training, you create a name for yourself, which can be chosen randomly or created by the player. Names cannot include numbers or random names(ex:xXxProGaMerxXx), and will be screened after being created. If a name is inappropriate, you will be asked to change it. You are finally finished with creating your character, and now can explore the galaxy.

Attributes are the physical and mental aspects of a player character. As players rise in rank, they gain points which they can put into attributes.

Promotion Points are Halo:Conflicts form of experience points. Promotion Points, or PP, are gained through various means. As players advance in rank, they gain skill points that can be used to raise their attributes.

As a way of keeping the game in check, incentives are awarded to factions who have significantly less players than the other factions. Incentives award players who fight on factions with less players with more Promotion Points, and is determined by the current population of players.

The main government of humanity,formed in 2160 to oversee UN operations in space.Their first major military operations was during the Interplanetary War against Communist and Fascist forces. When the Covenant first struck against Humanity, the UNSC was already in a fierce civil war against Insurrection forces. Now, with the Covenant treat bigger than ever, the UNSC is the first and last line of defense against the alien threat. Humans are naturally weaker than races in the Covenant, however they are intelligent and have primitive weaponry that is effective.

The UNSC has a wide variety of specialized weapons, armors and vehicles. On the ground, UNSC vehicles can typically overpower the Covenant, and their weapons are deadlier against flesh. They also have an arsenal of aircraft, both atmospheric and space capable aircraft which can be modified for different missions. Unfortunately, their navy is very low grade compared to the Covenant, and many of their vehicles are outmaneuvered by Covenant vehicles.

The zealous alien empire known as the Covenant is one of the most dangerous forces in the Orion Arm of the Milky Way galaxy. Dominated by two major alien species, the Sangheili and the San 'Shyumm, the Covenant forces are mostly forced into the Covenant. The Covenant worship an ancient race of beings known as the Forerunners, believing they fired the Halo Array as a form of ascending to godhood, a path the Covenant call the Great Journey and hope to walk the path.

The Covenants primary strength is the abilities of their races, and their incredibly powerful navy. An offensive heavy force, their Citadels are physically weaker than the UNSCs, and cannot be modified as much. However, their shielding technology on their infantry, vehicles, structures, and ships all offer a challenge to the UNSCs projectile weaponry.

Weaponry is the bread and butter of any shooter game. Various weapons require a certain amount of skill in that weapon category to use them effectively. When used ineffectively, a weapon can bounce,sending bullets away from the target. Skill can be gained from combat experience or through local trainers.

Vehicles are pieces of equipment used by the factions for various uses. Most commonly, vehicles are used as a form of transportation and as attack platforms. There are many kinds of vehicles, some can be modified for different purposes and each is unique in their weaponry and forms of locomotion.

Although the ship is controlled by a single player, other players use various stations to improve the effectiveness of the ship, otherwise they are manned by NPCs.

The ship captain controls the ship on an azimuth-elliptical degree system.

In game, various cover is available depending on environment. There are two kinds of cover, physical cover, and camouflage cover. Players can use physical cover to protect themselves from enemy fire. Camouflage cover is either wearing the right fatigues for the combat situation for the UNSC, or active camouflage generators for Covenant forces. Protection is measured by the strength of a structure, or how close it resembles the environment.

The Player interface is similar to other Halo games, with a few modifications for features added in Conflicts. On the top of the interface is the players Health, Energy, and if the player is wearing certain equipment, Shielding. Right of that is the weapons the player is currently holding, and how much ammunition the player is holding. Left of the Health bar is the Equipment, which shows the current equipment in the players inventory (this includes grenades and explosive devices). Certain armors provide a motion sensor, if this is the case it appears on the bottom left of the screen.

New features are added in via button macros. Such options include: Clan Listing, Friend and Ignore Lists, Chat Box, Inventory, Character Window, and the World Map (Which has options to zoom in and out, shows location of allied forces).

Friendly forces are marked with a green arrow over their head, showing their class icon in a box. If the friendly dies, the arrow turns red and the class icon is replaced with an X. Allied clan members have a blue arrow over their heads. Friendly forces are added when they are in a 1 km radius of the player, and allied clan members will always appear.

In combat, it is guaranteed that a player will be wounded. To monitor their health, a bar is located on the top of the interface. The bar is split into four sections, each representing a health level. The health levels include: minor, moderate, serious, grievous. A players health does not regenerate fully, although some can regenerate moderate injuries (SPARTANs, Sangheili, and Jiralhanae). Instead, players must be healed by a medic, who can see a players health status and respond accordingly.

Should a player fall in combat, there are multiple ways for them to return to the action. Environment plays a role in what will happen, if a player dies on the ground they can be revived via medic or will respawn at an allied base of the players choosing, however if a player were to die in space the player will respawn at the nearest friendly world. If a player falls in combat they lose a chunk of their promotion points (does not affect if the player has none), however if they are revived by an ally no penalty is added.

A clan is a group of players who band together in game for various purposes. Clans in Halo:Conflicts are divided between the two factions: Covenant and UNSC, and further by the service the player is a part of. An example would be a clan of the UNSC Marine Corp cannot recruit players who belong to the UNSC Army, and vice versa. As clans increase in size they are split into smaller, more manageable groups.

Naval clans work on the basis of the crew of a ship as a clan. Naval clans grow larger as new ships and crewmen fight alongside each other. An example would be a single ship being a task element, while a clan of three ships being a task force. 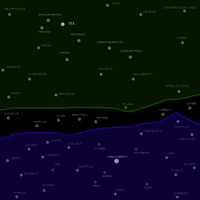 Within the game there are numerous planetary systems that each faction can control. These systems usually hold some form of strategic advantage. Typically each system has a single planet to fight for control, however on occasions there many be multiple planets needed for control of the system. Each faction starts with a number of systems, and in between the two are 'neutral' systems, which can be conquered and added to territory.

The Flood and Sentinels

During combat on Forerunner worlds and installations, players may accidentally wake the Flood, allowing them to spread and potentially infect the galaxy. Should the Flood arise, the planets Sentinel forces will also activate, targeting any Flood form as well as sentient life. Only quick action can stop the Flood from conquering the galaxy. Sentinels can be re-programmed to be allied to a certain faction if the planets Fortress is hacked.

There are four stages of Flood evolution, and in each stage the Flood progressively become more dangerous, and capable of semi-intelligent thought and well planed tactics.

The ultimate set for Conflicts players, the UNSC and Covenant edition are comparable to the Legendary Editions of Halo 3 and Halo: Reach. Each set is based around a weapons case from the game series (MA5 rifle for UNSC, and a T-51 DER/I Plasma Repeater for Covenant). Each edition grants special features and collectables unique to each set.

Retrieved from "https://halofanon.fandom.com/wiki/Halo:Conflicts?oldid=687334"
Community content is available under CC-BY-SA unless otherwise noted.