Gorbachev's Inner Circle (GIC) was a criminal and terrorist organization, led by Vladimir Gorbachev, and later Ivan Gorbachev. They work in collaboration with the American Mafia and the Cortez Cartel under the organization known as LEGION and serve as the protective force and major criminal arms dealer throughout the Orion arm.

After the Human-Covenant War, Gorbachev's Inner Circle was formed to support what was left of the insurrectionists. Vladimir Gorbachev took full leadership and began securing a criminal and terrorist presence all throughout Russia. 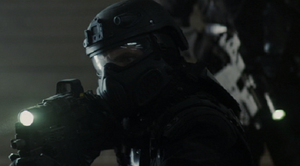 Russian Criminal Syndicate Soldiers
Add a photo to this gallery
Retrieved from "https://halofanon.fandom.com/wiki/Gorbachev%27s_Inner_Circle?oldid=691630"
Community content is available under CC-BY-SA unless otherwise noted.