Start a Wiki
Forums: Index → Necros Update knaves!
Note: This topic has been unedited for 787 days. It is considered archived - the discussion is over. Do not add to unless it really needs a response.

Due to some.... annoying. Circumstances, I've been less than active on the Necros front. However I can promise this weekend there wqill be a Vespera uber post. In the mean time I have something else for you, and no its not herpes. Its ANOTHER article drive! >=D

Well, it kinda is, its hard to describe exactly WHAT I need of you....

However, long story short, after some deliberation I decided to 'normalise' large parts of the Machina. Modified weapons and custom vehicles are all cool and such but confuddling. Very confuddling. So, in a attempt to normalise things, I'm going to enlist you all into making weapons, vehicles and ships for them, remember, big, effecient and not nessaceryily something in line with Geneva Conventions. As for naming them, honestly, I have no idea for a naming convention for them. I'll leave that to you, my adoring underlings! As for weaponry, largely ballistic weapons with energy support, similar to the UNSC, though for warships, have a 'main weapon space' for a large energy weapon or a MAC/Rail Gun supported by Plasma Lances and point defence lasers. On one note, I have two SMGs, a Assault Rifle, a cruiser, two dropships and a heavy fighter already in the works myself.

However, that is not all

However, thats STILL not it.

The Enclave awaits. I need some kind of naming system for vehicles and their numerous drones.

Your help is greatly appreciated by the Necros high command in their quest to remove the unworthy from the galaxy. <Death to Heroes>[The Damned] [The Lost][The Forgotten]|Deus Ex Ajax

I had previously made the M-50 Assault Rifle for the Machina, a light weapon. If it needs a little updating, go ahead.

take a look at these:

12.7mm minigun
Add a photo to this gallery

Okay, new plan, what I'm gonna do is put a list of weapon classes for the Machina and a gallery. Stick the weapon images in the gallery in order (so its easier to navigate). It its scratched out, its got a image, either donated by you kind fellows or i've got one in the wings. Also, feel free to add your own kinds of weapons to the template. <Death to Heroes>[The Damned] [The Lost][The Forgotten]|Deus Ex Ajax

Modified with a 'Maze' Silencer and scope

Kreigor Assault Pistol-44 Two KPM-4s bound together in a single weapon system, fed by two drums, it becomes a deadly assault weapon with a high rate of fire, selective fire and good accuracy

Gaust HMG Model-34B2, A 12.7 HMG that can be carried easily by infantry and deployed by bipod into positon.

A upscaled KBRM-99C, it is a electrically powered chain autocannon that is belt fed

A infantry carried flamer, produces a torrent of napalm that adheres and burns enemies.

based on technology bought from the Vorenus

Some of these weapons have already been used for the Brutes by Pyroneous Industries. You could make the machina buy from the PI. That would make the war that bit more interesting.

I just found a pic with Alien ships. Not sure they'd suit the Machina or Guardians at all, but I thought I should show the pic anyway so you can criticize it yourself, Ajax. If you like them, then I can cut the pic down into all the ships on it for individual ship pics and alter in paint if necessary. Cheers, 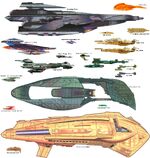 Oh and there's two more. Once again, you'll probably don't like 'em, but I thought I should show them anyway.

And as for a naming scheme for Machina ships. how about we use terms for size, like Kilo, Mega, Tera etc. etc.? Tera-class Dreadnaught, Mega-class Assault Carrier etc. Cheers,

'Ranger' Gaust Light Recon Vehicle Model-5, a light, fast vehicle for recon, carries a driver, 3 passengers and a gunner for the .50

Mod ‎of a Crusader with a Melter

Mod of a Invader with heavier armour

mod of a Invader, with four lance cannons.

mod of a Champion for a command vehicle

'Goliath' ‎Walker, with a cannon, auto cannon, powerful RADAR and a batter of missiles

mod of a Champion for anti infantry duties

mod of a champion with twice the amount of lances

'Avenger' dropship, for both infantry and vehicles, with chin gun

Silver Bolt Strategic Bomber, super sonic and armed with a payload of bombs or air to ground missiles

Mod of the Anvil, with a heavy mortar ‎

A mod of the Anvil with a Scarab Cannon ‎

Misanthrope armed with a flamer and bunker busting borer ‎

Misanthrope with Lances and Missiles ‎

Blackout Support vehicle ‎
Add a photo to this gallery

In need of pictures

Okay, update, i created a system for naming Machina vehicles and weapons, or at least the 'model' names. Take the Lineage that made them, the weapon/vehicle type and then add a 'M-number goes here'. So the Kreigor made 'heavy pistol' becomes KPM-3, etc. The Gaust made Main Battle tank becomes the GMBTM-12 and so on. However, names for vehicles and ships hasn't been made yet, but it may become a series of Transformer references :P <Death to Heroes>[The Damned] [The Lost][The Forgotten]|Deus Ex Ajax

Anyway, I just found out a naming scheme for The Guardians' vessels. They should use names like Guard/Guardian, Protector, Vanguard, Sentry and Mantle on the top for luck. For example: Mantle-class Dreadnaught, Vanguard-class Assault Carrier, Guard/Guardian-class Supercarrier, Sentry-class Destroyer and so on. Tell me if you think it sucks and I should have Angel punish me or if it's cool and that you'll use it :)

I think we should use names like Peace or Freedom or words that indicate such things, cause if my theory is right, they're trying to be free from someone, right? Freedom-class Battlemech and Peace-class Drone. Just giving thoughts. Cheers,

Gaaah, in love with the baddies from Fallout 3, eh, Jax? I think you should at least import their power armor... Regards, not adoring, not underling, "Your President, John Henry Eden..." SPARTAN-091[Admin]

The Enclave have 100% nothing to do with the Enclave of Fallout. They are named for quite literally being a enclave, whos borders lie entirely within the borders of another territory. <Death to Heroes>[The Damned] [The Lost][The Forgotten]|Deus Ex Ajax

Yeah, the grenade launcher, the flamethrower, and the minigun are from GOW, the missile launcher is from Fallout. thought they looked like something the Machina might use.

Just ol' AR, But I'd like to think that the Enclave's naming system could possibly be based on Angels or Angelic names? (i.e. Seraphim, Cherubim...) plenty to go around, as long as people avoid confusion with Covenant vehicles.
Respectfully, -- AR Contact Contributions

Funny you should say that, my original idea for their warships was to name them after individual angels (IE, Metatron-class Cruiser, Uriel-class Cruiser) but the idea kinda ran outta steam with me, and the order of angels won't work, i used every possible angelic order, that isn't stupidly name, along with a few orders of fallen angels, for USR Air Power. However I did come up with the idea of mythic monster slayers and hereos, to match the Necros' ship names of monsters, though if Somebody can write up a 'total listing' for ship classes using either of those ideas, I'll use 'em (IE you get ships for the enclave of similar classes to the USR named.) <Death to Heroes>[The Damned] [The Lost][The Forgotten]|Deus Ex Ajax

Silverstreak
Add a photo to this gallery

so we just put our name in the gallery? also where did most of the pics come from Hollywood

But yes, just put your name down next to the one you want, try to be sparing, numbers are limited. <Death to Heroes>[The Damned] [The Lost][The Forgotten]|Deus Ex Ajax

Ajax my pics of Zaboto Maste wont go onto my page for him :/ help plz Once a man enters his sights,

By the way, the gears 2 weapons are for brutes because they're made by the PI (i just haven't gotten round to finishing them). So i would prefer it if you got some other pictures because they're already taken in a way. Sorry,

So, after I found these and showed them to Ajax (myself and him both had accounts on where these pics came from), I uploaded them. Names/ship classes are forthcoming. -- Sgt. johnson 17:42, 30 November 2008 (UTC)