Start a Wiki
Forums: Index → Imagine If... Reborn.
Note: This topic has been unedited for 758 days. It is considered archived - the discussion is over. Do not add to unless it really needs a response.

This was one of my favorite topics on the Halopedia forums, back in the ancient days when the forums still looked like this. So, I thought I'd bring it over here, for a change of pace. And to see what everyone thought. The question is...

In your imagination, what do the users of Halo Fanon look like?"

I kind of envision people by their sigs, so to me Ajax looks like a CQB spartan in terrifying red and symbolizes some kind of unspoken authority. Actene 22:14, 7 November 2008 (UTC)

Nice. I've seen pics of AJ, but no one else.

Hey, you didn't say what you thought about the Matt Family (Matt, Baccus, Angel and me, their cousin) :'(

Anyways, this sounded quite fun, thanks for bringing it up!

I forgot a few people, it seems! My apologies. By the way, the idea is for you guys to post up your own versions of what you think people look like! Just start another heading underneath this. Do it! It's fun, easy, and best of all, free! Do it and do it NAAUOOGH! Regards, SPARTAN-091[Admin]

PUAHAH i like my description =D (right on with the bboy skills ;] )

I guess my descriptions would be

Geez, I knew I forgot one last person. There may be more, but I'll add 'em to the list as they remind me... that is, if I know them well enough. Regards, SPARTAN-091[Admin]

Just Another Grunts View of you all

Sweet a sweet or a grunt in a dead guys wig, this actually made my day :)...n my descriptions would be:

I'm Sorry BabyI Can't Save Your Child, I'm To Busy

If i missed anyone, please tell me.

How dare you call me a Vampire! I'm not *walking away from the now unconscious Lomi and hiding the sharp teeth* a vampire! I'm just a soon-to-be Drill Sergeant or Warlord, leading my army to victory against corrupted states and making them my own XD --Angel54 09:30, 8 November 2008 (UTC)

Lol, all of you have seen me as someone from RvB XD

Now, my perceptions are:

That's about those I can figure out stuff about. If I forgot someone, tell me. Cheers,

Me as a big brain full of knowledge? XD KAC-

SPARTAN 119: An F/A 712 Scimitar Multirole Fighter pilot who flies a custom active camophlaged aircraft, which explains why nobody knows what I look like.

Ajax 013: The mysterious commander of the Necros who is refusing to reveal his own identity. In personal combat, he uses an autocannon capable of firing thousands of "Epic Fail" messages per minute, a spam-seeking missile, and, of course, the imfamous banhammer.

Subtank: The last survivor of the Forerunners, who happens to look a lot like an Asian female.

H*Bad: A hand covered in a sock with two buttons for eyes and a mouth and nose drawn on in permanant marker.

Justanothergrunt: Just another Grunt, or that's what he want's you to think. In truth, he is the one who will kill us all some day.

Annihilative Repentance: Like 343 Guilty spark, only he has a purple light and is ten times as crazy.

O'Malley: Once thought to be one of our main users, he revealed himself to be an evil, flame-spitting demon with an intense hatred of new factions. He terrorized the message board for a few days before being defeated by Ajax and his banhammer.

LOMI: A 500 foot tall monster that rules over the other giant monsters on his secluded island. For unknown reasons, he harbors a grudge against Japan, as explified by his repeatedly sending his minions to destroy Tokyo. He also clearly has something against New York.

Hurray, I'm a cross between a SPARTAN and a fighter pilot!

O_o I'm a fetich young Brute? That sounds somewhat sexually wrong and weird. However i'll take it as a compliment that my Brute article is good :P Thanks, this is cool. However i can't really guess about anyone else because most of what i'd have thought of have already been stated. Still really cool idea though. Cya,

Roflz, some of these are pretty funny.

We are descended in blood and in spirit from revolutionists and rebels Men and women who dare to dissent from accepted doctrine As their heirs, may we never confuse honest dissent with disloyal subversion.

O_O I'm a chef now? You really have weird imagination....KAC-

haha these images keep giving me weird mental pictures of the randomest things working computers to hit up this forum. im curious as to what most ppl think of me haha
Hollywood

Hey, what about me? Sergeant Masterchief46517

What do you mean overly happy? Sure, I'm an optimist, but I get mad too at times *looks at people that are being dickheads*. I agree on your description on Angel though, except that she doesn't collect the skulls, she chops the whole head off XD

Maybe it's best I wasn't on Ajax's list... I'm kind of scared of what he thinks of me now.

Thanks Sgt.Johnson! You revenged Ajax for me :P

I think that Parkster's opinion of me is spot on! Actene: If This Is To End In Fire, Then We'll Burn Together

The "hehe" was for the comment AJ made. The comment after that is for g23, a user which I haven't seen for a while...KAC- 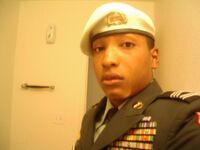 shit check out johnson lookin all sexy. women dig a man in uniform haha. cant wait till i get my dress blues haha Hollywood

Once a man enters his sights,

My View Of Everyone

Ajax 013-Some random person with a god complex who thinks he's the ultimate immortal superhuman SPARTAN who's badass with a banhammer. In reality, he's a tad too insane, and lives in an insane asylum that he built himself while he was drunk at a party and made a bet he could build a random building. Needless to say, he won the bet.

Subtank-Her name says it all. She's an AI that commands a nuclear submarine in a fishtank. She repeatedly destroys everything in the fishtank, and once managed to break it.

RelentlessRecusant-A Monitor who has red for a color because he likes biology. Currently, he is attempting to clone the world's first Hunter and use it for his plans...

Lordofmonsterisland-GOJIRA!!! *runs, talking while running* A gigantic Godzilla clone who wouldn't hurt a germ, but during soccer practice with Mecha-Godzilla he destroyed Tokyo. He also accidentally threw a nuclear bomb into Hiroshima in 1945 when he was younger. He thought it was a cool looking football.

SPARTAN-077-A smart person who is in SPARTAN armor. After discovering an interdimensional portal to the Capital Wasteland, he became addicted to Mentats.

Sgt. johnson-A helpful RPer here who lives a double life as a troll on Halopedia.

The parkster-An evil general with a fetish for controlling a Brute army. He plans to use it one day to destroy Monster Island, but all his Brutes are retards.

Rotaretilbo-A real teenager who became addicted to Halo 3 and seeks to triple wield, rocket jump, and the like. His last rocket jump resulted in first-degree burns, two broken legs, and the burning down of his house. He commands an army of furry dogs and cats which includes Hello Kitty Paratroopers.

Justanothergrunt-Just another grunt as he says. He doesn't want to die.

Bioniclepluslotr-A troll who has his own army of orcs and Bionicles.

The evil O'malley-Exactly his name.

Delta-269-Commands his own Krimzon Guard army. Says that the KG War Factory is undestroyable by ANYTHING, but in reality, I've destroyed it 14 times. *boom* Make that 15.

SPARTAN-984-A godmodding SPARTAN who is fun to play with. He likes fighting games, McDonald's, and the occasional Brute head-splitting.

CommanderTony-A JROTC teen who loves guns and admins his own wiki, CTpedia. He hopes to become President Of The United States someday. In the future he won't be POTUS, but AdmiralTony. A fanatical American patriot.

Blemo-An ODST SPARTAN who loves cheese wheels, is Asian, lives in the US, loves funny stuff, kills people if they take his wafflez, itches his butt because Spike Grenades get stuck there, loves run-on sentences that tell no story that just stand there with random content in them being extremly funny making most people LOL like the run-on sentence I'm using now, and has his own robot counterpart.

ONI recon 111-A person who admins his own boards and co-admins a wiki. He works for ONI, and performs Recon missions. Primary tactic: discover fanfic ideas.

Since Johnstons posted up a pic of himself, guess I may as well to.... 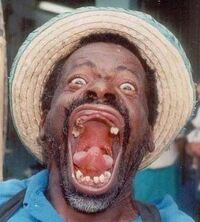 I'm Sorry BabyI Can't Save Your Child, I'm To Busy

Actene: If This Is To End In Fire, Then We'll Burn Together

Yo Sparty 984, why would my brutes go to monster island? I don't even know where that is! Also that joke on Haroshima is funny but lets hope that there aren't any chinease people to take offense. Just cleared the funny and offensive line there... barely... Anyway, JAG, once again looking good ;P

2. Parkster, that was fictional. I don't know where Monster Island is either.

haha im sorry parkster but do you own a map? first of all it's HIROshima not haro and the biggest mistake...chinese people...come on man hahaha. maybe im overacting a bit but when your asian...well half...haha Hollywood

I'm Pretty Damn it! *Picks up hammer and breaks Hollywood* yea..thats me...I totally look like that, ahem sarcasm ahem, jk jk n yea...Hiroshima is a Chinese city Parkster where they invented the fabled Chinese dish, the Cream of Sum Yung Guy (also jk, but glad to see ure so knowledgable on glabal history) yea, sure twas an honest mistake to be blamed on speedy typing, faster than thought. I'm Sorry BabyI Can't Save Your Child, I'm To Busy

984, how could you forget me? Or are you scared i'll eat you if you say something i don't like...

Sorry about the spelling, but i assure you for definite that Hiroshima is in Japan! I know that for a fact, and America dropped he first ever casulity inflicting nuke on that city, where Japan later surrendered to America, who then went on to kick the Nazi's ass with Britian. OOOO RAAAH! But yeh Hiroshima is Japanese, and if you still don't beieve me then check out this uber long inter-wiki link so you'll click on it to find out the truth that Hiroshima was and still is in Japan. Ha lol =D

HA OMG i've just realised that i was the one that said that they were chiease!!! My bad. Also i'm not asian O_o Sorry :P

Retrieved from "https://halofanon.fandom.com/wiki/Forum:Imagine_If..._Reborn.?oldid=670401"
Community content is available under CC-BY-SA unless otherwise noted.