Fire Team QUIVER is a SPARTAN III Category-II Fire Team. Comprised of SPARTAN III Candidates who's genetic makeup matched the prerequisites to Doctor Catherine Elizabeth Halsey's SPARTAN II Program. Because of this QUIVER was taken away from the rest of their SPARTAN III brethren and placed in this Fire Team to be more useful to the UNSC. Beginning years of the Fire Team had them preforming raids, Scuttle missions per Cole Protocol, and demolition operations. By 2540 however they were reassigned to assist more larger campaigns for the UNSC.

The Conception of Fire Team QUIVER began when several SPARTAN III Candidates were found to hold the qualifying genetic markers of the SPARTAN II Program. QUIVER wasn't the only CATEGORY-II Fire Team created because of these findings. Several other teams were created along side QUIVER. Including; Teams NOBLE, GAUNTLET, RED and ECHO. The 2 Alpha Company members of QUIVER served as rotary members of these other Fire Teams until new orphans were found after Alpha Company had been successfully augmented. These early candidates were meant for Beta Company. But having acquired these children were taken to Onyx and placed in an early class designated Cäsar.

For this time period these Spartans were given temporary Tags which were given the letter "C" as a interim moniker. When Beta company was to begin training the "C" would be replaced by the letter "B". But because some of these Cäsar class candidates were near the age of the Alpha Company Spartans they were given special training at Camp Curahee to see them pushed through, especially the CAT-II qualified Candidates.

By 2538 the CAT-II Candidates were fully trained and all survived the augmentation process. These Spartans were SPARTAN-B009(C009), SPARTAN-B082(C082) and SPARTAN-B195(C195) who were then entered into the CAT II Teams. Having reached enough numbers to harbor another Fire Team, Fire Team QUIVER was formed with SPARTAN-A089 placed as Team Leader.

Between 2538 and 2541, Fire Team Quiver preformed spec op missions too difficult for ODSTs to enter. Including a scuttling mission of an old UEG supply frigate which failed to fully erase all records on board. The ship's crew sent out an encrypted SOS stating they couldn't blow the ship as a Kig-Yar Pirate fleet had commandeered the ship and had plans to sell the frigate to the Covenant for a price.

QUIVER was then sent in on board a Prowler vessel and boarded the ship without detection. Their orders were either to clear the entire ship of hostiles and erase all data or blow up the entire ship. It was discovered that the ship's data had been copied to all the pirates' ships. This left only 1 option, overloading the supply frigate's engines and forcing it to go off wiping out the entire Kig-Yar fleet. The mission was successful and the Team escaped on board the Prowler before the Covenant Ship that arrived in the system could detect them.

Another Operation they completed was with a fellow CAT-II Team Echo, The Operation was considered suicidal. The UNSC had learned that one of the natural satellites of a lost outer colony harbored an oddly massive amounts of helium-3 and the Covenant were building a harvesting and fueling station on the satellite giving them a new jumping point deeper into UNSC Territory.

Both Teams were sent in to destroy this construction before it was entirely complete. The Teams were given 2 Havoc Tactical Nukes to swipe clean the entire location. Again the operation was unexpected a success as the refueling station was only guarded by grunts and jackals and the construction done by grunt manual labors. Because the factory already had gained access to the massive "vein" the nuclear explosion collapsed the structure upon itself and closing off any access from the surface to the resource.

The Battle of Orin

In August of 2545 Fire Team QUIVER was still stationed in the UNSC Battle group Wuchowsen aboard the Halcyon Class Cruiser "Flight of Eagles." The Battle group was being refueled and refitted at the colony of Orin. When the Covenant discovered the system. The Covenant fleet that arrived wasn't all that massive and must of been an expeditionary force. The Fleet blew through the readied ships that orbited the colony and went in atmosphere to the surface. QUIVER was sent down to the surface to help UNSC Forces defend key Military installations and help scrub any information in the small ONI facilities that peppered the continents.

After several days of multiple operations it seemed the Covenant were after something on the planet and weren't calling for any support. The Flight of Eagles still docked to a rearming station was calling for help to give them more time after the station fended off small boarding parties. QUIVER devised a plan to take a Covenant ship and blow it among other Covenant vessels. Hijacking a Covenant Phantom dropship they boarded a Covenant corvette hiding behind the Phantom's IFF tags. Once on board the team split in 2 teams to make sure their plan was a success. A089 and A102 were to head for the reactor and engines of the Corvette while the rest of QUIVER took the bridge from the Covenant forces. Once their objectives were complete they set the Corvette to a course of rejoining a large portion of the fleet who were searching for whatever was on the planet. While they set the reactor of the corvette to go supernova and take the other Covenant ships with it.

After all high priority missions had been completed Fire Team QUIVER was assigned to civilian evacuation operations. The Covenant forces on the ground; led by the remaining Field masters, were ordered to take the evacuation station and send all of their forces in a blitz. By the end of the entire battle B082 and A102 are both killed in action. The actions of QUIVER saved massive amounts of lives especially civilians. Battle group Wuchowsen was completely destroyed save for Flight of Eagles which was the vessel which received the refugees deep within Orin's Solar System.

A089, B195 and B009 were placed in cryo until they could be revived at the UNSC Hopeful several months later.

End of the War

By 2552 Quiver had continued to serve in several more campaigns of the war while never accepting more Spartans into their team after the Battle for Orin. Including Operation: ALOADAI which was some of the first witnessed combat that was the beginning of the Great Schism. Following intel given by ONI, Fire Team QUIVER was tasked in causing a rift between Brute and Elite forces by creating events that made either force seem like they were directly attacking one another. Being a smaller fire team QUIVER was successful in causing 2 covenant fleets, 1 led by Sangheili forces and the other Jiralhanae into attack one another. In the end the Sangheili fleet was victorious and in so doing weakened the fleet allowing for a UNSC ship hiding in system to send several havoc nuclear missiles into the fray of Covenant ships after their shields had been broken by plasma fire.

QUIVER also returned to Earth in time for the 2nd Battle of Earth where they preformed missions on the North American and South American Continents to stop Truth's forces from causing more destruction including a very specific plan of blowing bombs inside the faults of the Pacific coast in order to cause massive destruction through Earthquakes.

After the Human Covenant War had ended QUIVER was offered a position in the SPARTAN IV Program, they original declined the offer when their positions would've followed Jun-A266's being more of liaisons and recruiters for the IV Program. When offered a 2nd time to join but this time continue being Spartans and training the new generation of IVs they accepted.

After having accepted to join the IV Program and the newly formed SPARTAN Branch they were then assigned to hold 2 tours on board the recommissioned ANVIL Station to be apart of the ANVIL Initiative. Where UNSC Forces and Spartans would train and live with Sangheili troops from Thel' Vadam's Swords of Sanghelios. They would test new prototype technology such as the new GEN2 MJOLNIR Armor System and altered weaponry of both UNSC and Sangheili design.

After their stint on ANVIL Station was up they were given their first ever shore leave on Earth. They spent 4 months on Earth mostly relaxing and being on their toes expecting trouble around every corner. After their shore leave was up they arrived on the UNSC Infinity for the first time where they were greeted by the SPARTAN IVs they were to train. While training there was conflict between SPARTAN-B009(C009) Melissa and Commander Sarah Palmer over how Melissa was training the SPARTAN IVs. B009(C009) was applying her SPARTAN III training she received under Franklin Mendez and Kurt-051 which was too excessive for these new Spartans who had lived normal lives and received basic training from the UNSC and perhaps ODST training. With this Palmer chastised QUIVER and put them on her shit list.

QUIVER was also apart of the first tour on Requiem as they were on board the Infinity when the vessel went to investigate the distress signal that Cortana placed on the Forward Unto Dawn. Although they stayed aboard the ship to protect it.

They also were apart of the 2nd Tour of Requiem when the Infinity returned to the planet 6 months later. During this campaign they befriended a SPARTAN IV of Fire Team Task. They rescued this Spartan after Fire Team Task was ambushed by Prometheans.This Spartan's name was Ellie Torizawa. They elected to have become apart of QUIVER after seeing her devastation realizing all of her team and friends were dead which mirrored how they felt when Tall and Strong were killed years ago on Orin. 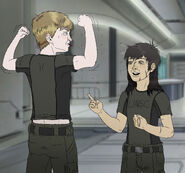 Melissa meeting Grant for the first time on Onyx 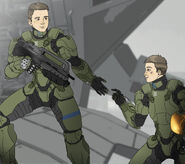 Vance helping his younger sister board a Pelican at Camp Curahee 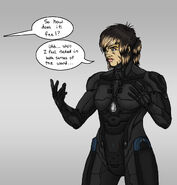 Wasp trying on the new MJOLNIR GEN2 Techsuit for the first time. 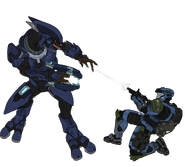 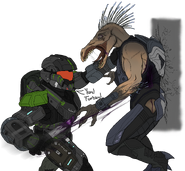 B009 and B082, entering a ONI facility filled with Covenant forces led by Jiralhanae regiment. The M247H that B082 used proved to be the defining factor in this mission, shredding through the un-shielded brutes like balloons.

Fire Team Quiver rescuing civilians underneath Ceideht city on August 10th, 2545
Add a photo to this gallery
Retrieved from "https://halofanon.fandom.com/wiki/Fire_Team_QUIVER?oldid=719318"
Community content is available under CC-BY-SA unless otherwise noted.