"Zey're common for budget spacelines, but zey're no good for robbing - too small and fast to bother claiming their meagre riches."
―Silvia Sauvage, on the Pathfindus.

The Ford FNX Pathfindus is a low-to-mid-tier, medium-range starliner manufactured by the Ford Space Engineering Company. Advertised as the flagship model of Ford's FNX-line of budget spacefaring vessels, the Pathfindus continues the company's insistence on reliability and adaptability that was the trademark in the preceding FN, FA, and the DS lines, ferrying colonists and cargo alike across Human Space. This smaller vehicle directly improves upon them with an all-new framework that erases the subtle additions made over fifty years, cutting down cost and streamlining internal wiring. This cost is further reduced by the inclusion of off-the-shelf components which can be easily replaced by more advanced alternatives. Considered responsive and available in a wide range of options for every income level, the FNX Pathfindus became a common sight at colonial spaceports and tradelanes alike.

However, while the Pathfindus is recognised as still remaining true to Ford's vision, it is unmistakably a product of the Insurrection and Human-Covenant War which has encroached upon its perceived usefulness. It is faster and more resilient to damage than any Ford built before, and certainly most older competitors. New, more expensive options such as ventral thrusters and quick-retraction landing gear are offered to allow it to go from a standstill to the escape velocity in seconds. And finally, expanded consumable storage ensures it can feed well in excess of how many it can reliably seat. All these unfortunately make it an effective small evacuation shuttle, running blockading Covenant ships should it be required.

The first Pathfindus starliners were introduced in 2544, long after it became clear that the advancements to the FN Nomad were insufficient for deterring Covenant and pirate aggressors. They did not initially see widespread adoption, as Ford's mark-up and their reduced carrying capacity saw many freighting captains keeping their older ships. Sold alongside their predecessor, Ford made the decision to release more specialised people-movers to appeal to small ferry companies, who made up a surprising portion of its initial adoption. While a majority of these ships were destroyed on the colonies, enough survived that they became incredibly popular after the War ended, particularly in the used-vehicles market.

The FNX Delegator is the name of an exclusive variant built to be used as a shuttle for UEG dignitaries and representatives, and the highest ranking officers within United Nations Space Command. Competing against SinoViet's Infinitum Star Yacht, the Delegator was formally adopted by the UNSC in mid-2554 and the UEG not long after. While it on paper it is formidable and competently built, a troublesome service history is already inspiring doubt in its users which may quickly lead to an early decommissioning.

As a diplomatic shuttle, the Delegator is designed to house some forty individuals in absolute luxury, with the appropriate escort and protection to ensure they can reach their destination safely. However, it is not uncommon for only a single senator to claim the entire ship as their own, stripping out the additional bedrooms in favour of more living space they can tune to their liking. The interior decor is dependent on the specifications of their user, with the default style relying on bright whites and eco themes. Extensive automation allows for only a small crew, with cooking, cleaning, and piloting all taken over by a fifth-generation Smart AI who controls the Vestol-built robots. The hull is reinforced with over half a metre of Titanium-A1 battleplate, however, the main protection is from its two overlapping dispersal field generators. This offers outstanding protection for a ship of its size. The lower racks for cargo have been removed and in their place is a barracks for a squad of armed security personnel, which includes their sleeping quarters, armoury, and detection equipment. To power everything, a Reyes-McLees Mark-IV/Custom helium-3 fusion reactor is fitted at the very aft of the shuttle. The two engines have been replaced with top-of-the-line experimental tritium systems, which offer an unprecedented power-to-weight for engines of their size and are more than capable of carrying the significant increase in weight at far higher speeds. 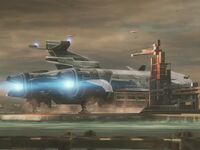 Add a photo to this gallery
Retrieved from "https://halofanon.fandom.com/wiki/FNX_Pathfindus?oldid=706798"
Community content is available under CC-BY-SA unless otherwise noted.