"Beneath our wings, they will only know pain and destruction."
―Anonymous Prowler captain.

The Eclipse-class prowler (hull classification code: PRO) was the main line of stealth corvettes utilised by ONI during the Human-Covenant War. Responsible for popularising the bat-like silhouette that would become synomymous with prowlers as a whole, the Eclipse was, at the time of it's introduction the stealthiest and most powerful prowler ever developed by the UNSC. Unlike it's predecessors, which relied on speed and physical camouflage to gather intelligence in plain sight, the Eclipse was outfitted with a much more extensive outfit of electronic warfare features to cloak itself both visually and to sensors in enemy territory. Should it be detected, this class could defend itself with a potent array of energy and nuclear-based ordnance, but it's reinforced superstructure was intended to allow it to tank enough fire to activate it's slipspace drive and escape.

Introduced in 2529 in response to the extensive casualties among previous classes of prowlers, the Eclipse was originally designed to coordinate and sustain the deployment of ONI teams behind Covenant lines. However, it would spread into a variety of other roles, as it's enhanced stealth systems and expansive cargo-bays saw it being easily adapted into different roles.

With it's outspread, downward-facing wings and squat profile, the Eclipse-class prowler was immediately recognised as an ONI vessel even to those who are unfamiliar with human ship designs. This was a departure from the previous convention of building prowlers, as they were built to resemble civilian yachts and sloops to hide among civilian fleets. In spite of it's wide, long profile, the Eclipse only weighed 14,000 metric tons; most of the design was actually stripped back for the purposes of inspiring shock-and-awe, and it's lack armour kept the corvette light. 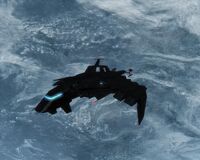 A prowler above a human colony world.

A prowler traverses an asteroid field. 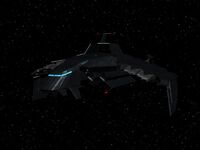 Another prowler in deep space.

The aft of the Eclipse-class.
Add a photo to this gallery
Retrieved from "https://halofanon.fandom.com/wiki/Eclipse-class_prowler?oldid=709687"
Community content is available under CC-BY-SA unless otherwise noted.