"Our current mission is to clear out the Brute holdouts. Don't make it more complicated than it is."
―Captain Weisheng Jo.

Task Force Foxhound, officially Joint Task Force Foxtrot-Hotel, is a multi-branch Joint Task Force established by the Security Council of the United Nations Space Command as one of many response methods to consolidate and bolster weakened positions across Human Space including Earth in the final years of the Human-Covenant War. Due to the heavy casualties received from Covenant attacks through the twenty-seven-year conflict, there were many military units that suffered from a lack of manpower. These units had taken so many casualties during some of the War's heaviest battles that there wasn't enough combat veterans and capable recruits to refill their ranks.

Instead of trying to cut corners with restructuring undermanned units, the units that were at-risk of being deactivated or were typically rated as "combat ineffective" were re-consolidated into ad hoc joint task forces and deployed as auxiliary units and on the rare occasion, assault units, to try to offset the Covenant in any way possible including trying to attack Covenant rather than defend which was the typical military doctrine of the UNSC for the majority of the Human-Covenant War. Task Force Foxhound is predominantly made up of units that barely escaped and survived the heavy combat during the Fall of Reach in 2552. Now in the post-Great War era, the UNSC has re-tasked Foxhound as a multi-branch expeditionary task force serving in a similar role as a quick reaction force akin to a Marine Expeditionary Unit, typically a role handled by the Marine Corps.

In the uncertainty of the post-Great War era, with all forms of national security threats popping up across colonized space and from the chaos of the fallen Covenant Empire, Task Force Foxhound has been seeing constant deployments against Covenant remnants, Sangheili extremists, a somewhat revitalized Insurrectionist movement, and a recent rise in cases of rogue Spartan supersoldiers.

Due to the heavy losses received by UNSC colonial units during the Human-Covenant War, Task Force Foxhound has acted as a sort of umbrella company, taking in degraded veteran units that suffered heavy combat losses and were without garrisons due to the loss of the worlds these units were originally assigned. Foxhound was sometimes referred to as a "Homeless Shelter" due to the lack of home garrison for the units it absorbed. Due to being a multi-branch task force, Foxhound recruits from just about all backgrounds, this means all branches including Spartan Operations, however, there is some bad blood between Foxhound and Spartan Operations given logistical and inter-branch politics.

When the SPARTAN-IV Program began recruiting from special mission units like the Orbital Drop Shock Troopers and Army Special Warfare Units with heavy political support from UNSC High Command and the Office of Naval Intelligence, Task Force Foxhound and other unorthodox field units were given special attention in preventing the new Spartan branch from acquiring more funding and quality military veterans. Task Force Foxhound was not exempt from the Spartan talent search, and some operators did transfer to the Spartan branch, however, Spartans teams were assigned to Foxhound as retribution and compensation to ease the dislike for the new generation of augmented warfighters.

Task Force Foxhound, overall, is a battalion-sized combat unit with about 800 military personnel. However, due to the unorthodox circumstances of Task Force Foxhound's existence, it is led by one Colonel Neville Howard of the UNSC Army. Colonel Howard was the commanding officer of the 34th Infantry Brigade, tied to the greater 126th Division stationed on the colony world of Reach. During the Fall of Reach in 2552, the 34th Infantry Brigade suffered above seventy percent combat casualties, specifically in the Viery Territory Combat Theater and during the heavy combat at Szurdok Ridge where a Covenant supercarrier, the Long Night of Solace infamously obliterated the assaulting UNSC forces assigned to that region of the combat theater. The remnants of the 34th Infantry Brigade make up a large part of the task force, though they aren't the only ones. These remnants are referred to as ad hoc "Ranger Response Fireteams" or RRFs, four-man cells operating co-independently from the traditional chain of command. Their typical role on the battlefield is to serve as force multipliers, augmenting existing units ability to wage direct action missions. The Ranger Response Fireteams are one of the central pillars of Foxhound's combat capabilities.

Other units involved in the Task Force Foxhound roster besides the Ranger Response Teams include the unorthodox vacuum jumping units, the Extravehicular Demolition Specialization Teams, which specialize in capturing starships in enemy hands, in-combat engineering repairs, ad hoc combat missions, etc. EDSTs trace their lineage back to the Insurrections where Colonial Military Administration units were assigned to retaking vessels held by rebels.

"All You Need is Kill!"
―Platoon Foxtrot-Victor-Three Unit Motto.

Platoon F-V-3, or Platoon Foxtrot-Victor-Three, is led by Fireteam Chieftain, the platoon's command element. It is commanded by Army Lieutenant Kibwe Avaygen, a twelve-year Army veteran of the Human-Covenant War who survived some of the worst battles in the conflict, including the Siege of Paris IV and the Fall of Reach. He has been with the 34th Infantry Brigade for the entirety of his career. Of all the deployable fireteams of the Platoon, Chieftain is the least deployed due to their position as a command element.

Fireteam Asphalt served a prominent role in the Fall of Reach. Relatively new upon being recruited into the 34th Infantry, Fireteam Asphalt were fresh recruits and transfers when the Fall of Reach occurred. The previous unit to hold the callsign of Asphalt was wiped out during a previous engagement during the Siege of Paris IV where a full squad was killed by plasma bombardment. Fireteam Asphalt managed to survive the battle, earning the respect of their fellow soldiers by pulling through the horrors of battle. 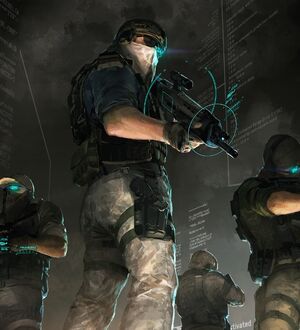 Easily one of the platoon's most experienced units, Fireteam Valor has one of the longest combat records among Task Force Foxhound's combat units. The unit was formed before the Siege of Paris IV where it was part of another platoon, however, heavy losses led to Valor being absorbed by Foxtrot-Victor-Three. The Fall of Reach was a turning point for Valor when the 34th Infantry Brigade was nearly destroyed and the remnants were funneled into Foxhound. Fireteam Valor was deployed in 2553 at the request of an ONI deep reconnaissance team for combat support to the rebel colony of Gilgamesh. During the deployment, Staff Sergeant Quinn Silva was murdered by the rebel supersoldier, Jonathan Ulan.

Due to the loss of the unit's leader, intelligence officer Zachary Rayne who was leading the Gilgamesh interdiction and survey team, decided to promote Sergeant Duke Hartmann to fireteam lead. Undermanned, Fireteam Valor has continued to serve alongside the ONI special activities unit "Hotel-II" against the colony of Gilgamesh and the mercenary organization known as the Baal Defense Solutions, a large private military firm operating in Human Space with anti-alien sentiments. While not being augmented and specializing mostly in direct action, its a wonder that this team has been able to stand toe-to-toe with supersoldiers and insurmountable odds. While Hotel-II likes to think of Valor as a bunch of idiots, they have proven themselves in combat. Against Ulan and keeping up with Spartans such as Cody-B042.

Fireteam Photon is an unusual unit among the already atypical forces meshed together as a part of Task Force Foxhound. On temporary assignment of an undisclosed amount of time, Fireteam Photon is made up of SPARTAN-IIIs, specifically Delta Company unlike the rest of the Spartans, a part of Spartan Detachment Kolsokov which is made up of former special forces turned SPARTAN-IV Operators. Photon is the only team made up of war orphans who joined up during the height of the Halo-Covenant War and augmented in their teenage years which makes their experiences as supersoldiers different from the rest of their comrades. Because of this disconnection, being child soldiers and still, in their youth, has promoted awkwardness and avoidance between the different generations of Spartans. Photon sticks to themselves under most circumstances unless they're presence has been required.

While distant, Fireteam Photon is one of the most obedient and efficient Spartan teams a part of Kolsokov's unit. They question little, they fulfill their mission though preferring tactical freedom to operate as they see fit, and have been found to be better motivated and disciplined compared to some of the other Spartans. When Task Force Foxhound is required for small unit operations that require a scalpel's approach, Photon is among the first considered. There is little that can be questioned of Fireteam Photon's loyalty and efficiency. Under the quiet and commanding attention of Chief Petty Officer Jiang Mei, formerly Mei-D214, Team Photon is one of the best units in Foxhound's roster.

Retrieved from "https://halofanon.fandom.com/wiki/Combined_Task_Force_Dragon_Spear?oldid=701084"
Community content is available under CC-BY-SA unless otherwise noted.