The Black River Tatang is a tried and tested weapon, modelled on the Filipino Barong. The weapon is ideally designed for both stabbing and cutting, being ideal for use in both normal and reverse grips and an ideal system for use in close quarters with or without a gun. The entire weapon is made from a single piece of high strength titanium carbide, precision cut with laser cutting. The thermoplastic grip is bonded directly onto the metal. Other design features of the knife include a blade catching grip for close quarters combat and a vial of mercury hidden within the blade to allow the blade to be more finely balanced, making it ideal as a throwing blade. The Tatang has become popular among UNSC special forces for its diverse capabilities as a weapon and a tool. The blade is available in The weapon comes in phosphate covering, exposed edge phosphate coat or coatless and a choice of normal edge of serrated edge.

The BR Night Scream is modelled on the Tatang, using a solid blade and tang with a grip moulded on. The blade however utilises a more mainstream blade design. However, on the inverse of the blade there is a secondary edge with serrations designed for tool uses. The blade itself possess high strength and excellent qualities for both cutting and stabbing. While more multifunctional than the Tatang, it lacks the ability to be thrown and also lacks the deadly precision. It is available with a phosphate coat, with an exposed edge, or coatless. 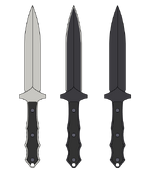 The BR Commando is a knife modelled on much older Fairbairn-Sykes knife, with a symmetrical blade design with deadly spearpoint, making it ideal for stabbing or cutting. The thin, narrow blade is ideal at penetrating armour or cleanly severing arteries. The weapon consists of a full tang design featuring a cross guard with thermoplastic grips moulded onto it. The blade is made from Titanium Carbide, with a strengthened Mercury Capsule running the length of it, designed to balance the knife perfectly for throwing both over hand and as a dart. The knife is made ready for procurement specifically for the Army Rangers, Army Commandos and Marine Raiders.

The Black River Wasp is a short knife with a clip point. A smaller tool is attached to the bottom of the handle for uses such as opening cans and bottles. The handle itself is ergonomically designed to fit comfortably in the user's hands. The knife is available with a phosphate coat on the blade, an exposed edge, or completely coatless.

A modified version of the Black River Hornet, it has a spear point blade intended for stabbing, though loses a degree of its multifunction. This makes it ideal as a 'pure' combat weapon and still carries the external tools.

The Kalista is designed as an exotic concealment knife, possessing a full grip but only half length blade. It can be easily used with most knife tactics, and is ideal for slipping between plating on body armour for a killing blow. 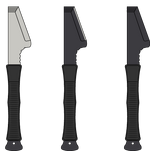 The Small Pry is designed as a small dynamic entry tool, allowing users to breach locked doors, windows or even saw through thin materials. While unsuitable as a combat weapon, it is ideal for urban breaching scenarios, where it is substantially smaller than more commonly used breaching tools. Its created from an extremely hard and extremely strong metal alloy, giving it incredible tolerance for punishment.

Retrieved from "https://halofanon.fandom.com/wiki/Black_River_Knives?oldid=514129"
Community content is available under CC-BY-SA unless otherwise noted.