"You're about to make history. This won't stop the Created, but it will be the first real blow we strike against this new threat."
― Ryder Kedar to Task Force Phoenix-Two.[1]

The Asphodel Meadows Raid was an attack on the Iskander Syndicate-owned Asphodel Meadows Station by UNSC Special Forces in December 2558. After the Created shut down the UEG Inner Colonies, scattered UNSC forces were determined to strike back by any means possible. A ragtag strike team under Lieutenant Commander Ryder Kedar staged an extravehicular boarding action against the Syndicate base with the goal of killing Syndicate leader Helen Powell.

The team was overwhelmed by prepared Syndicate defenders led by field commanders David Kahn and Tatiana Onegin. Without an exfiltration option or insider help, the attackers were eliminated except for SPARTAN-III Andra-D054, the team's leader and sole survivor. The Office of Naval Intelligence marked the mission as a failure and presumed Andra's demise for a time. 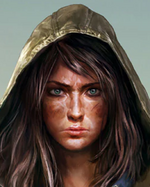 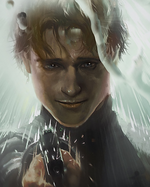 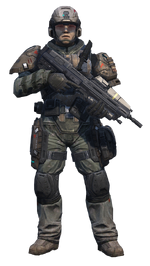 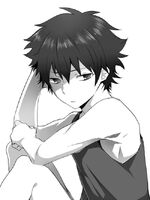 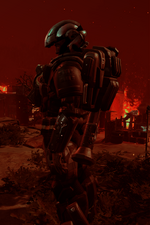 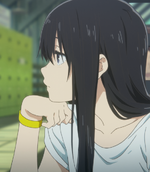 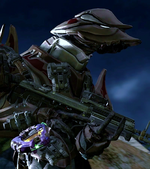 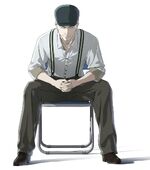 After weeks without direct action against Created strongholds, Lieutenant Commander Ryder Kedar convinced the localized command aboard the UNSC Infinity to greenlight a low-priority strike against the Iskander Syndicate leadership. Naval Intelligence concluded through some records of The Assembly activities that the Syndicate overlapped with the Assembly, becoming a Created vassal state or support structure. According to Kedar's playbook, the mission entailed assassinating the current Syndicate head of state, Helen Powell.

While little was known about Powell, her activities were well-documented through intelligence channels formed by the Office of Naval Intelligence over the years. This network included the previous leader and founder of the Iskander Syndicate, Tobias Lensky. Informed that he would not have access to his own homegrown unit, Task Force Phoenix, Kedar recruited from stranded and half-strength units aboard the UNSC Infinity.

The mission's key witness was Andra-D054, a commando of SPARTAN-III Delta Company. After a falling out with her superiors at the VIOLET-III Spartan Headhunters outfit, she requested Kedar to take her on. Agreeing, he convinced her former superior Lieutenant Commander Derek Frendsen to hand her over to Kedar's mission-specific group, Task Force Phoenix-Two, for the duration of the assassination plot. Any attempts to recruit further Spartans to Phoenix-Two was stonewalled by Spartan Commander Sarah Palmer under the pretense of overstepping his logistical allowance.

By Condor freighter, Kedar set out with his thirty-man ragtag team for the remote agrarian colony of Furthest Point. Abandoned years ago by the Unified Earth Government, the fledgling community was annexed by the Insurrectionist-affiliated Wealthian Coalition. Traveling under low profile, the freighter was left with the Phoenix-Two unit at the local spaceport. Kedar and Andra traveled light and into the local town, Ragged Ass Road, to meet Lensky who retired to the obscure colony.

After pleasantries and exchanging information, Lensky sent the two on their way with the needed connections. The intelligence point was Argo 'Varvin, a Sangheili informant for the Office of Naval Intelligence who fell out of contact when the Created took over. Argo found his way into a high-profile role on the Asphodel Meadows Station where Helen Powell resided. According to the plan Argo was to be the strike team's exfiltration option and inside help but Argo also voiced fears that the mission would fail due to the lack of preparation. His doubts fell on deaf ears for the determined Kedar.

Lensky and Argo's information also found another data point, Phoenix-Two's ticket to Asphodel Meadows in the former UNSC Drake-class landing corvette Tofu XII. Once a troop transport for the UNSC Marine Corps during the Human-Covenant War, the starship was acquired and converted by a former UNSC Navy cook, Vincent Yoon. Now a traveling restaurant and supply freighter, it made a perfect trojan horse for ferrying the strike team aboard the Asphodel Meadows.

Intent to hide out during the Created Uprising, Vincent Yoon stranded his employees at a frontier waystation and turned to Tobias Lensky for a good place to disappear for a time. He didn't expect the old crime boss to betray his trust. From within the calm of a hot Jupiter's radiation tail, the Tofu XII was almost survey-blind and isolated except upon receiving a specific communique via pinpoint Slipspace probe. Under these conditions, any ship that attempted to get close in the radiation storm would be either cooked or easy to detect.

Armed by Lensky's betrayal, Phoenix-Two arrived in the same star system and approached Yoon's position through gravity assist. Dropping a Slipspace probe in advance, the Condor-freighter hid in wait for the Tofu XII to crawl out of its hiding spot. Over the course of several hours, Vincent Yoon brought the corvette into the open. It was at that point that Phoenix-Two struck out at Tofu XII.

Undermanned and unprepared, Tofu XII was no match for a single Condor gunship. The small freighter blinded the corvette's targeting systems with proximity ASGM-10 missile detonations. A boarding team led by Andra-D054 followed, performing a spacewalk reminiscent of the one they planned for the Asphodel Meadows in the near future. Employing a Covenant-devised tactic of breaching through escape pod launch bays, Andra's team detonated XTCC charges to the hardware specifications needed to force a jettison of two Bumblebee lifeboats. Through these new entry points, her assault team again breached into the Tofu XII's exposed bridge. Alone, Vincent Yoon was no match for a Spartan and a squad of UNSC Special Forces operators. Phoenix-Two apprehended Yoon without incident, making way for the Condor to dock and for the rest of the task force to come aboard their new commandeered corvette.

Kedar coerced Yoon's further compliance by ordering Andra to keep track of the cook's every action for the rest of the mission. Requiring someone with the appropriate permissions to operate within Syndicate territory, Yoon was conscripted into the Asphodel Meadows Raid. He would pilot and gain permission for the Tofu XII to get close to Asphodel Meadows Station. Combat engineers in Kedar's task force performed further work on the commandeered corvette, trading the archaic Slipspace drive with the Condor's modernized version. Because Kedar was not authorized to participate in the mission himself, he was to be called back by UNSC Frontier Command as news of developments with the forward-operating UNSC Sixth Fleet required the ONI officer's attention.

Andra was left in charge of operations in Kedar's stead. Even as a Petty Officer Third Class but also a Spartan, she was to command authority over the mission and Kedar's recruited forces, many wartime veterans with years of combat experience longer than Andra was alive. While a daunting task, Kedar's parting words of confidence in Andra's ability motivated her to do her best and see the mission through to success.

Splitting with Kedar's Condor element, the Andra-led task force proceeded aboard the renewed UNSC Tofu XII with Yoon at the helm. The assault team unified under Andra with the deputy-guidance of Sergeant Merrick Silverthorne, an associate of Andra-D054 from the alien-hunting Internal Investigations Unit 419. Based on intelligence provided by Argo, the assault team had real-time positioning of Asphodel Meadows which was capable of Slipspace and free movement under its own power, despite being a large space station habitat.

Entering Asphodel Meadows Station's proximity space, the Tofu XII approached with Yoon on the radio to report unscheduled arrival using old credentials that allowed the freighter to serve on the Frontier without operational complications. However, due to raised security and training, the Iskander Syndicate and their Created allies were already under suspicion with subtle target lock by the station's Smart AI custodian, Arthur.

At the same time, the Created did not believe the UNSC or any other faction would be audacious enough for a frontal assault. Arthur wasn't prepared for Andra's opening gambit, ordering the Tofu XII to launch its full, illicit-complement of Archer anti-ship missiles with a proximity detonation. While Arthur managed to eliminate 70% of the missile barrage, it created an opening to launch the Tofu XII's two inflatable boarding vehicles out the vehicle bay and towards a less-guarded cargo facility according to Argo's information. Andra and her extravehicular team provided security for the entry vehicles with ARC-920 railguns.

Steps ahead of Arthur, Syndicate enforcer David Kahn made an appearance on the cargo deck and engaged Andra's boarding team, taking many out with his Spartan-like precision and sniper rifle. His precise work continued as a hindrance, destroying the first inflatable only to discover it was a bomb. The inflatable's detonation destroyed the nearby facilities and cargo bay, forcing Kahn to retreat further into Asphodel Meadows as Phoenix-Two made landfall with their second inflatable. In the first bout, Phoenix-Two lost five operatives but continued with the mission. Yoon, once again in control of his corvette, bugged out of the system with a micro-Slipspace jump as his part of the mission was over.

Armed with shotguns, rifles, machine guns, and plasma weapons, Phoenix-Two brought everything it had to bear against the Iskander Syndicate's security forces in room-to-room close quarters. Because the assault team lacked a loyal mission AI to preside over operations, the subroutines in Andra's Air Assault MJOLNIR suit acted as the main operating node for the assault team's shared systems and electronic warfare capabilities.

While the twenty-five-person attack group made short work of the underequipped, multi-species security forces, it was the Promethean forces-on-loan that proved a challenge. The Syndicate was similar to fight the Covenant but they found difficulty as Crawlers appeared out from corners and ventilation ducts, taking potshots and widdling down the assault force. The teleporting Promethean Knights and Armigers proved impossible to defeat but avoidable in the station's small spaces. Reports of David Kahn and Tatiana Onegin, Syndicate field commanders, would sound off on the radio network only to shut off as team members were eliminated. Even as the UNSC strike team was brought down to a single fireteam, they made it to Helen Powell's personal chambers.

There, the small unit once again encountered David Kahn up close. Andra attempted to go toe-to-toe with Kahn but as a Spartan sharpshooter, she was no match and was directed to keep after the escaping Helen Powell by Silverthorne. Kahn proceeded to eliminate the rest of Andra's team. She made it as far as Powell's personal office and right up to Powell. Kahn caught up to Andra's surprise and bludgeoned her armor into an inoperable state. Ending the assassination plot, Kahn planted an armor override-restraint, immobilizing the Spartan.

After everything had been done, the Asphodel Meadows Raid closed on failure; and without a single message from Argo who disappeared from radio contact when the fighting started.

Andra was detained by the Iskander Syndicate and stripped of her armor. Placed in holding and under interrogation, she was unable to report the status of her team's mission leaving the command structure to assume complete mission failure and the deaths of every single participant in the Asphodel Meadows Raid.

Andra in the meantime was offered by Tatiana Onegin to work with the Created as a freelance agent, eliminating old-world enemies that once plagued the UNSC and were also a thorn in the side of the Created. The Spartan refused, still set in her loyalty to the UNSC, and was instead sent to be processed for reeducation. The unexpected betrayal of Argo' Varvin and David Kahn, however, nullified the plan as the duo broke Andra out of confinement. Together, the three escaped aboard Kahn's shuttle Eagle's Claw on a new mission to find Cassandra-G006, his apparent daughter.

Retrieved from "https://halofanon.fandom.com/wiki/Asphodel_Meadows_Raid?oldid=720363"
Community content is available under CC-BY-SA unless otherwise noted.