The Asclepius-class mobile dockyard is a heavy support vessel which was utilised by the UNSC Navy before and during the Human-Covenant War. Exceptionally heavily-armoured at the time of its construction, the Asclepius carries a rather powerful slipspace drive and a fully-equipped set of factories and repair bays. This allows it to fulfil a wide range of roles, from supporting UNSC fleets into deep-space and heavy rescue craft, to opening up new tactical coordination options by carrying entire battlegroups within itself. Ideally deployed in pairs, Asclepius are unfortunately slow to turn and lightly armed for their size, requiring an escort when engaged by anything heavier than a few destroyers.

Dwarfing the Epoch-class heavy carrier but being outmassed by the UNSC's various super carriers, the Asclepius was not the longest ship employed by the UNSC Navy's logistical division, but it was among the heaviest. Unlike other RMC products, its monolithic shape was not as prominent and was instead far more greebled and even. In fact, it is more accurate to say its profile is like a badly-done step pyramid from above.

The bow is dominated by a forward 'head', similar to that on the Marathon-class heavy cruiser. Similarly, the barrels to the MACs are here as well.

The idea behind the Asclepius-class originated in 2504, when planning for the Halcyon- and Marathon-class cruisers was well underway. The founders of the Reyes-McLees corporation were not merely intending to release two new cruisers, but an entire line of next-generation warships designed to render the UNSC's fleet effectively obsolete. Centred around those two cruisers, this master plan called for slowly stripping out the effectiveness of cruisers from any other manufacturer by making all subsequent product either share parts and components with the cruiser, or simply being unable to service a ship with a non-RMC hull. Key to this was the development of a new repair barge, which would later be secretly reconfigured to minimise compatibility with all other manufacturers. However, as both the charismatic Robert McLees nor his wife believed that overseeing the development of their new cruisers as being a much higher priority, they delegated its development to a number of subordinates within their company.

Due to its nature, the design would continuously evolve as both warships changed throughout their development, and would be caught in the great reshuffle when the Halcyon-class was rejected by their intended customers. Knowing they lacked the necessary cash to redevelop all of their designs, RMC took the unprecedented act of secretly negotiating with SinoViet Heavy Machinery. In exchange to help shoulder the monetary costs, RMC would openly support SinoViet products for a decade and would agree not to release any new vessels that weigh less than five million tonnes that would otherwise compete with them. As part of a partial project oversight transfer, the Asclepius was forced to be delayed further as its internal subsystems were completely rebuilt to accept their frigates and destroyers. Despite this, some advantages arose - at the cost of some durability, SinoViet's design doctrine drastically lightened it from 67 million tonnes down to 52 million, and its construction cost was slashed by 6.29%.

The frontal half of a Marathon-class cruiser crashes into an Asclepius, caused by the Iliad. 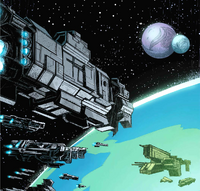 An Asclepius servicing a fleet above Reach.

An Asclepius among the response fleet to the Oth Lodon system.
Add a photo to this gallery
Retrieved from "https://halofanon.fandom.com/wiki/Asclepius-class_mobile_dockyard?oldid=708933"
Community content is available under CC-BY-SA unless otherwise noted.