The Alpha-9 Division of ONI Section Three was first established in 2556 as an aggressive Intelligence gathering agency. The agency is organized in to several echelons, each one supporting the other. The Command echelon provides the ultimate oversight over the agency and operatives in the field.

After the Human-Covenant War, the Office of Naval Intelligence took stock of the UEG's situation and realized that a fledgling Insurrections could pose a serious threat. Thus they decided that the random attacks with little intelligence gathering beforehand, as they had done in the old days, would not work. Thus ONI created Alpha-9, an agency with the mission of gathering intelligence through aggressive, even physical, means.

Operatives are generally individuals or teams of two (depending on the mission parameters), and are referred to as Cellular Operators. They act with their own full initiative, only using the resources of the agency to support and complete their mission objectives. They are deniable assets; If caught, ONI will deny any and all connection to the agent, and will often take steps to kill the captured agent if he/she cannot be rescued.

Selection to be a Cellular Operator involved numerous physical and mental batteries, including resisting interrogation and a 70 kilometer trek over rough terrain during the night. The first step is being approached by a representative of ONI looking for persons willing to undergo stressful covert operations. The person may be civilian, although most operators are handpicked from Special Forces roles. Civilians are generally incredible athletes with a predilection towards anti-socialism, and must undergo standard military boot camp and training before going through the selection process and operative training.

During interrogation, the prospective trainee is forced to resist chemical and physical means of interrogation by any means necessary. Failing this means automatic disqualification from the program.

Training is even more physically intense than selection. After a rigorous six-month conditioning pipeline, trainees being hand-to-hand combat training, particularly the Jewish fighting style of Krav Maga and the use of Center Axis Relock, although other forms of hand-to-hand combat are available for a trainee to learn. The exact time for the hand-to-hand training is not known, but it is known to run parallel with advanced weapons training. A candidate is not considered a "graduate" of this step until they have displayed sufficient mastery of the required skills.

After combat training, the trainee begins covert training, starting with PEAR (Pursuit Evasion And Reconnaissance) training. This is an advanced course of SERE (Survival Evasion Resistance and Escape) in that it focuses more on urban and suburban environments. It also incorporates rapid stealth actions and moving silently in darkness. This course lasts for several months, upon which the trainee enters in to more advanced stealth courses that incorporate weapons and parkour.

The third, and final, phase of stealth training is the toughest, forcing the trainee to use all that they have learned beforehand in order to succeed. Once the trainee passes this phase they are officially an Alpha-9 Division Cellular Operator. They receive the mark of a Cellular Operator, the standard Alpha-9 Division logo over an eagle holding three arrows in one foot and an olive branch in the other. For security purposes these are left at base during missions. After this the trainees enter a short five week training phase in which they learn the intricacies of their suits.

After this phase approximately 30% of operators are sent on a mission immediately after they complete this phase of training. The majority, however, continue on with training for further evaluation and for honing their skills even further.

Operators are constantly training when not on a mission, and often take on the role of trainers during these times.

Alpha-9 Division is divided in to four different echelons, with each one having their own set of checks and balances over the others. Most are divided in to separate sections themselves, each one with a different purpose.

The Command Echelon is divided in to two distinct sections. One section, the smaller one, is in overall command of Alpha-9 and provides official oversight over the entire agency. The larger section works hand-in-hand with the Intelligence division to set objectives for operators in the field.

In every operations room (each one backing up a single Cellular Operator) the command echelon operators work to coordinate with incoming data from the intelligence division and date from operators in the field. They then use the data to prioritize targets and objectives. The person with the final word is the mission's Officer-in-Charge (OIC). He/she has the final word on what action should be taken.

There are three sections in the Intelligence Echelon. The first is comprised of intelligence teams who guide an operative through a mission. The second processes and evaluates both internal and external intelligence. This section also co-ops with the Operations Echelon to handle internal security. The third section is the most secretive, as they handle intelligence pertaining to future missions. Compromising this section can result in the death of an operator and the failure of a mission. All employees of the intelligence division are skilled aggressive hackers.

In an operations room, the Intelligence Echelon operators filter and process information from satellites, UAVs, and the cellular operators to make sure that nothing is missed. Liaisons with the Command Echelon offer advice on incoming intelligence, and are occasionally allowed to override Command Echelon orders if necessary. Liaisons are generally second in command to the OIC.

The Operations Echelon is where Cellular Operatives are attached. They have their own separate sections: The regulars and the Elite. Regulars are new and old operators, while the Elite are particularly skilled ones who have mastered the are of aggressive covert intelligence gathering. The Elite are few and only ever used when there is a higher than normal risk of death or capture. To date, only a few have been killed and the only one that has been captured resisted intense interrogation and escaped. The operative returned the agency and is still active.

In order to be considered for Elite Operator status, a cellular operator must undergo two more mental screenings and a single physical screening. They can undergo these before or after successfully completing a high-risk mission involving assassination. An Elite Operator candidate must have at least ten confirmed kills.

The Armory division is the only non-sectioned echelon of Alpha-9. It is also the smallest and deals with the distribution and inventorying of all equipment, armor, weapons, and other pieces of technology that operators use. The people in this section are masters in the upkeep and acquisition of technology.

The Armory Echelon is the most isolated echelon in the organization, as they only serve to distribute equipment. There is one operator in each operation room who is a highly skilled technician that provides technological support to Cellular Operators. They aid the operators in overcoming technological problems that the operators cannot solve on their own.

This operation was the first mission of the fledgling agency, and involved their limited staff and single operative. It was a simple mission: Infiltrate an Insurrectionist camp and acquire the location of their leader, and then neutralize him. The mission was pulled off with only one alarm and a minor injury to the Cellular Operative. The Agency was then given full approval by ONI Section Three, Alpha-1 Division and began full operations.

Recovery One was one of the most sensitive and toughest operations in the agency's history. It involved infiltrating several Covenant bases, a task usually left to the Elite operators, and recovering data on Covenant species and new weapons. Through several successful missions Alpha-9 recovered considerable data on Covenant technology and species, including a race of insectoid creatures who called themselves the Evaniptii.

This was the only operation in which a Cellular Operator was taken captive. He was torture by brutes for several weeks before he was able to escape using an EMP grenade and a pistol. He evaded pursuit in a jungle for several more weeks before contacting the UNSC and being picked up. He has since returned to the agency and is still active to this date.

The standard infiltration suit issued to all Cellular Operators consists of a single jumpsuit made of a think material optimized for silent movement. Woven in to the threads is a complicated network of electronics that regulate body heat and monitor vitals. The exterior of the suit can cool so that the operator can pass thermal sensors much more easily while keeping the interior heated. However, this can only last for a short time as the interior of the suit quickly heats beyond a bearable temperature, and is forced to vent excess heat. Armor is minimal, consisting of a thin layer of shear-thickening fluid armor which rapidly loses its consistency as it takes damage.

The armored infiltration suit is similar to the standard infiltration suit, but is used in missions in which combat is most likely unavoidable. Armor plates are ceramic tiles wrapped in an aramid weave, then painted to match the rest of the suit. As armor remains minimal, the plates only cover vital areas of the body.

This suit is similar to the Standard Infiltration Suit, but offers more flexibility in swapping out camouflage patterns.

After the rise of more advanced technology, the Camouflaged Infiltration suit was replaced by the enhanced camouflage infiltration suit that utilized photo-reactive cloth to match the surrounding environment.

The third suit is the least commonly used, and is reserved for Elite operatives. It features similar armor to the other two suits, but includes an integrated mask with more advanced computer, HUD, and sensor systems. The suit can be temporarily sealed for passing through hazardous environments and for short underwater dives. 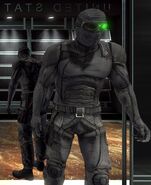 Elite infiltration suit
Add a photo to this gallery

Cellular Operatives generally have their pick of what weapons they take on a mission. Each one is generally suited to that Operatives' preference and the mission parameters. The vast majority, however, use compact, suppressed and subsonic weapons. Several weapons are only in use by Alpha-9.

The Alpha-9 PDA is the standard issue PDS for all Cellular Operatives and most base personnel. It can interlink with the AS2559 Portable Computer for easy data access, uploading, and downloading.

The AS2559/A9 Portable Computer is an upgrade from the standard AS2559. It includes more complex data storage and memory processing. Programs run still faster and are more complex. This version is nearly impossible to hack without a coordinated effort from several 9th generation AIs.

As the need for physical entry in to sealed areas grew and the use of old-fashioned locks shrank, engineers were forced to begin designing new ways of accessing locked areas stealthily without having to carry a series of cumbersome tools. The Spectrum Lockpick is the result of years of study and design. It can access locks and unlock them on a molecular level, automatically bypassing any real threat they might have posed. It is not exactly known what function allows the Spectrum Lockpick to work as it has yet to be declassified by ONI.

Desert/Savannah camouflage.
Add a photo to this gallery

Pictured below are just a few of the environmental patterns that the enhanced camouflage infiltration suit can match.

Add a photo to this gallery
Retrieved from "https://halofanon.fandom.com/wiki/Alpha-9_Division?oldid=560250"
Community content is available under CC-BY-SA unless otherwise noted.