Halo Fanon
Register
Don't have an account?
Sign In
Advertisement
in: Against All Odds, Expanded Universe, Inactive Project,
and 2 more

"We make war so that we may live in peace."
―Aristotle 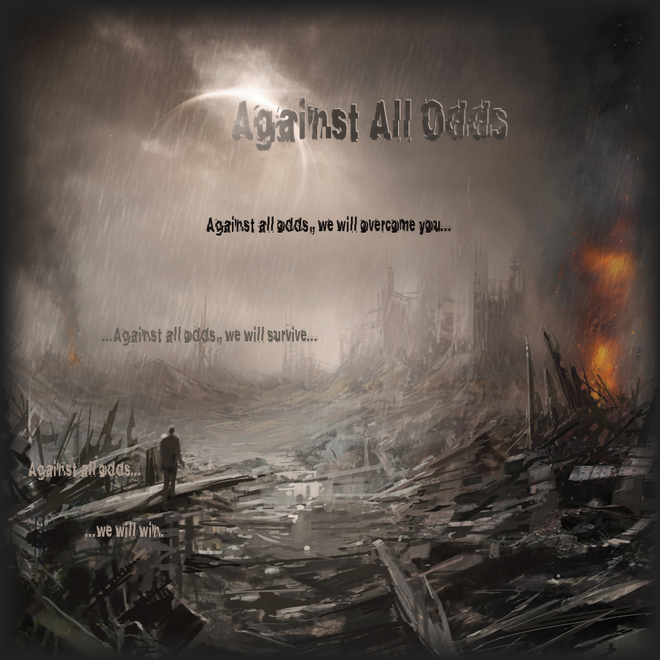 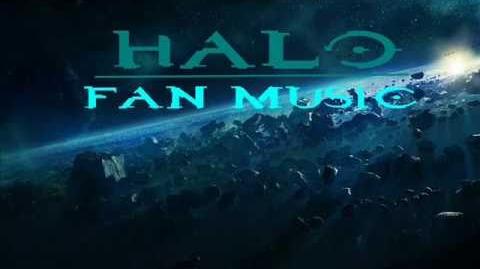 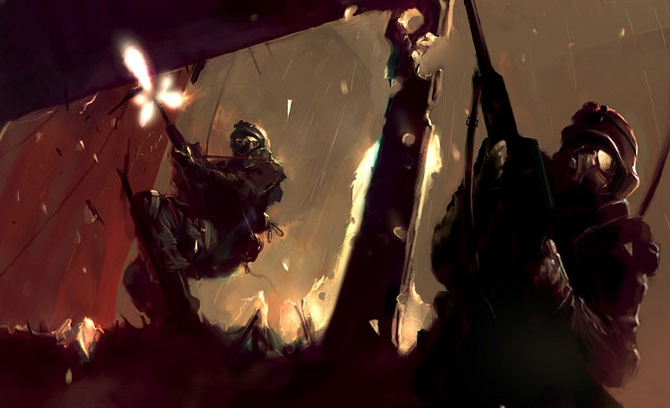 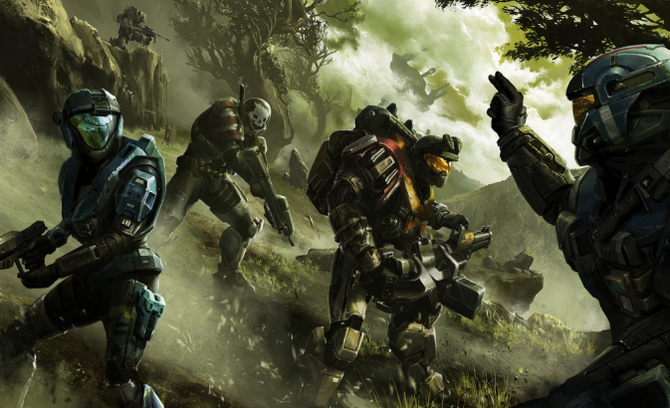 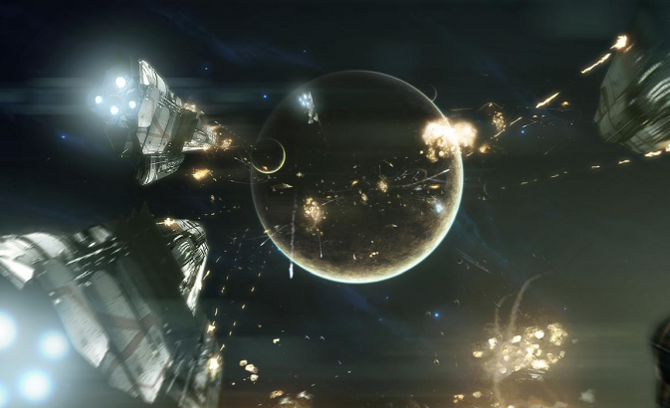 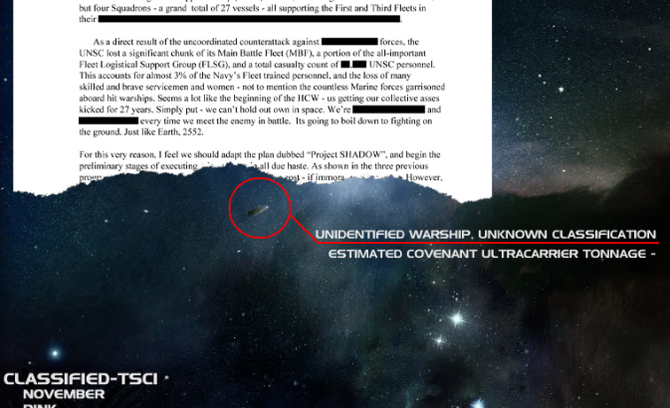 Humanity wages war upon itself as rebel factions demand freedom through terrorism and bloodshed.

The great test of humanity's survival begins as they fight against a Covenant intent on their extinction.

Human and Sangheili join together into a new era of uprisings, corruption, opportunity...and power.

Against All Odds (abbr. AAO) is an expanded universe project that predominantly establishes the events following the infamous Human-Covenant War. It is a non-alternate universe and follows the canon of Bungie as its highest priority, and several key events actually take place before or during the HCW era. Anyone is welcome to join the project simply by asking one of the co-creators, and no one in the project is barred from making articles outside of AAO's universe.

And with those words, history was made on Halo Fanon...

There is no official date for AAO's establishment, only that it was formed by Maslab and Sonasaurus, who had joined a couple of stories and a small group of characters into one "universe" sometime in early to mid-2009. Initially, community interest was minimal, and it wasn't until late 2009 that the first contributor, LieutenantDavies, joined. A number of them followed, and the oldest currently active member is Leo Fox.

AAO became known as one of Halo Fanon's biggest community projects; its peak activity was in 2010, when there were over 30 members active at one time. In the 2010 annual awards, there were 14 articles that won awards in their respective categories. To date, AAO has won 45 awards in total.

AAO is still running today, although things have slowed down somewhat due to many users' inactivity and Maslab's long hiatus throughout most of 2011. However, activity is beginning to pick up again and the progression of its timeline has regained momentum, with more focus on the other eras in the project.

As of April 11, 2012, AAO has disassociated itself from 343 Industries, as made official here. The project is still considered non-alternate, as it completely abides by all canon created by Bungie.

If you're looking for something to do in AAO, or are starting off and don't know how to build a good foundation for your role, consult one of the following users. Their individual "fields of expertise" should help you decide what you want to do most.

Maslab establishes most of AAO's post Human-Covenant War storyline, covering the ground with his long novels and related articles. He is also good at plot ideas for any story and has a solid sense of what does and doesn't make sense in a story or article.

Sonasaurus mostly writes stories, as he is hopeless at scientific matters. This leads him to frequently ask Maslab for help when the need arises, or if worst comes to worst, resort to technobabble. He does more work on the canon side of Halo than his fellow co-creator does, and also fills in gaps in the post-HCW timeline established by Maslab. He writes about Sangheili just as much as he does about the UNSC, and more so than most of the other members in AAO; however, he often takes liberties due to their vaguely detailed culture. He isn't too fond of writing articles, but when he does, he ensures that it is of high quality both content-wise and appearance-wise. Most of his articles are characters.

Leo Fox is, for all intents and purposes, the all-around expert when it comes to the UNSC. He frequently writes about the Office of Naval Intelligence, but is no less able at creating other types of UNSC characters. He is also in charge of managing the UNSC's fleet (currently under construction by Auguststorm1945).

StoneGhost is AAO's technological expert. He specializes in creating articles on weapons, vehicles, or really any type of miscellaneous technology. He also has a knack for drawing two-dimensional images of UNSC ships, although he would prefer not to create them on a whim as they are painstaking to complete. He also splits his writing between AAO and his own project, the Swarmverse.

Actene deals mostly with AAO's criminal underworld. Most of his content is related to human mercenaries, freelancers, and the like, with the occasional alien thrown in. He has created several factions tied to these notable individuals. When it comes to Sangheili, he places them in affiliations outside that of the military's. He has a few "good" characters, and his most prominent characters are closer to being "neutral" than "evil". His stories revolve around these characters, who are for the most part, existent in multiple universes. His stories, however, are usually devoted to a single universe. Recently, most of his works have been devoted to AAO.

For a question that has been asked so many times, here's the long-awaited answer! AAO is split into a series of different eras, each of differing quantity but of equal importance. Here are all five eras that make up the project's storyline. They currently do not have articles, but will be written all in good time.

Ancient Sanghelios Conflicts (Ages of Conflict—Ages of Conversion) — A rarely explored era, and the smallest of the five in AAO, these events are nonetheless important to the project. Stories that tell of key events that led to changes in the Sangheili and their ties to the Covenant over the ages, as well as the ancestors of some of the most prominent "present-day" Sangheili and their accomplishments.

Colonial Independence Campaigns (2479—2537) — The UNSC's conflicts with the various human rebel factions that grow increasingly powerful over the years. Even though the last few years of the long-time war took a backseat after the appearance of the Covenant, this era outlines many important events that shaped the Human-Covenant War and the future of the Unified Earth Government itself.

Human-Covenant War (2525—2553) — The biggest conflict the UNSC ever faces in the first half of the 26th century, the infamous Human-Covenant War pits the UNSC against the Hierarchical alien caste, as the human race faces genocide, and consequently the possibility of extinction. As colony after colony is destroyed by the Covenant, the UNSC is slowly backed into a corner and become overpowered and outnumbered—until the Covenant itself breaks apart in turmoil.

Interspecies Union Conflicts (2554—2588) — After forming a new alliance with the Sangheili and beginning the stage of recovery for the human race's diminished numbers, the Interspecies Union is created and rises to power. But so do various factions that oppose them. From a human rebel organization that is much more resourceful than their Insurrectionist counterparts to a gathering of Sangheili that still believe in the Covenant's Great Journey, the Interspecies Union find themselves on the brink of war as tensions rise between the opposing sides. What's more, the Covenant that was thought to have been defeated have gained a newfound strength and seek revenge on those who had nearly brought them down...

Against All Odds (2604—?) — The fifth and largest era to AAO, one that tells of a massive war between the Interspecies Union and a deadly enemy. This era and all information pertaining to it are under construction and is currently off-limits for writing.

This will be added to and improved upon over time.

WARNING
The following contains plot spoilers. It is advised that you read the actual stories first before consulting this.

When you are in AAO, you are expected to keep your content at a certain degree of canon-friendliness. Based on the chart below, it is recommended that your articles are at a tier-3 level or above. Tier-4 is borderline canon, and would be best improved over time. If you're anything below that, act fast or things will go downhill very quickly.